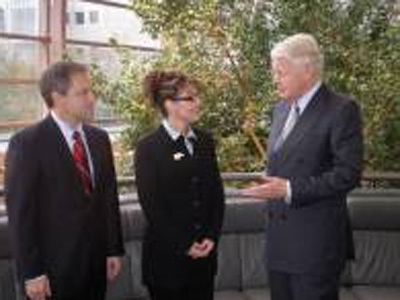 Sarah Palin's trip to New York this week was billed as the Republican vice-presidential candidate's first chance to meet with foreign heads of state. That perception was fueled by her comment this month, when she told ABC News' Charles Gibson that -- as Alaska governor -- she never had met with the leader of another nation.

Iceland, a nation of some 300,000, has taken a lead in developing geothermal-energy resources, and Grímsson spoke at an Arctic energy symposium, and then had a private meeting with Palin. They talked for the better part of an hour, primarily about geothermal energy and Iceland's expertise in developing that resource, according to Mead Treadwell, an Alaska Republican and Arctic expert who attended the meeting.

"[Grímsson] is a head of state, I know that," Treadwell said. "And we have pictures of them together taken at the meeting."