Palin fatigue is not something from which only reporters suffer; even women who voted Republican in 2010 can catch it. At least, according to the latest Women's Monitor survey sponsored by EMILY's List. Other polls confirm Palin's ubiquity is likely hurting her, rather than helping her.

Women who moved away from Obama this past November are less likely to support Palin in a Presidential matchup than a generic Republican. The Women's Monitor surveyed women who voted for Obama in 2008, but did not vote Democratic this past November. One third of these were "Republican defectors" who voted Republican, and about three-fifths were "drop-off" voters who simply stayed home. While the defectors are obviously more Republican-leaning than those who stayed home, both groups of women would vote for Obama over Palin in 2012. Obama is weaker with defectors when matched up against a generic Republican. 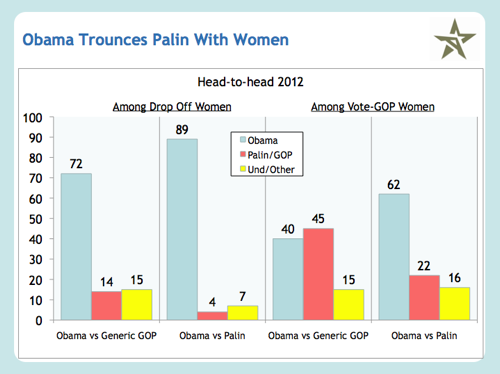 Further, despite Palin's efforts to reach women voters, through her web video, her endorsements, or her TLC show, Palin is just as unpopular with women as with men. According to this recent Politico survey, Palin's favorables don't vary across gender. Similarly, across both genders, and especially with independents, Obama runs much better when matched up against Palin versus a generic Republican.

And views toward Palin are generally a topic on which the public agrees with Washington elites. The same Politico survey also included a sample of Washington insiders. Insiders and the general population agree; large majorities believe she is unqualified to be President.

But while Republicans fought over Palin's endorsement, they viscerally demonized Speaker Nancy Pelosi. Despite these efforts, and a bruising election cycle, this week's Bloomberg poll, shows Speaker Pelosi more popular than Sarah Palin.

Much like Michael Steele's unwelcome bid for re-election as RNC chair, it's unusual to see someone so unpopular considering a run for President. An examination of her numbers easily reveals a self-inflicted wound to her popularity, as if she has been running a negative campaign against herself. It's no wonder both elites and the public feel she is a negative influence on politics.