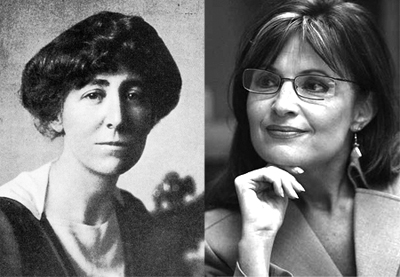 On a cold distant November in 1916, a true Republican maverick and reformer became the first woman elected to the United States Congress. Her name was Jeannette Rankin and as an indefatigable champion of peace, justice and equality for all, her ghost stands in stark contrast to the Republican woman being hailed today as a loveable patriot and agent of change.

Should Sarah Palin be voted into office come this November, ninety two years after Jeannette's historic election, she may well be responsible for change: a change back to a time before the struggles of thousands of women and men succeeded in providing a framework upon which the Women's, Peace and Civil Rights movements could weave themselves into the fabric of America.

When Jeannette Rankin ran for Congress from Montana, not only were there no women in the US government - women across the United States couldn't vote. Three years later the nineteenth amendment was ratified granting all American women the Federal right to cast their ballot. Today more than fifty million American women are not registered. Of registered female voters in the last election, twenty two million of us didn't bother.

It is the most painful irony to watch Palin stand on Jeannette's shoulders in order to dismantle that which Rankin gave her life to build. At the time that Jeannette was campaigning, there were several states in which it was still legal for a husband to terminate his wife's pregnancy without her consent. Choice and abortion are not synonyms. Choice is a word with connotations that reach far and deep into a woman's life - her finances, her sexuality, her body, her opportunities, her control over her own destiny. Rankin believed that these choices should be available not only to all women, but to all peoples.

When asked, because of her concern for the Jewish refugees that Roosevelt turned away from U.S. shores before our entry into WWII, if she was Jewish, Jeannette said, "Yes. I'm a Jew. I'm a Christian, I'm Hindu, I'm a Moslem." When pressed she said, "What difference does it make?" Sarah Palin defines herself as a "Bible believing Christian" who has "been saved" meaning that she takes unequivocally both the Bible as the literal Word and Revelation of God and that Jesus Christ was God in the flesh.

And while Sarah Palin sees war as a "task from God," Jeannette Rankin stood up against unimaginable pressure and voted against US entry into both World Wars. Despite losing the support of her sisters in suffrage, who saw her vote against entry into WWI as a betrayal that "made women look weak," and the universal condemnation of the entire country, who said her "no" vote after the attacks on Pearl Harbor made her a traitor and a Nazi sympathizer, Jeannette was steadfast in her belief that violence and force are never a solution.

She said, "There can be no compromise with war; it cannot be reformed or controlled; cannot be disciplined into decency or codified into common sense; for war is the slaughter of human beings, temporarily regarded as enemies, on as large a scale as possible. You can no more win a war than you can win an earthquake."

Jeannette Rankin grew up in privilege but gave her life to public service; starting her career in social work, helping orphans and the poor, then moving into women's suffrage, labor rights, immigrant rights, civil rights and always, maintaining her deep concern about the rights of children. She saw first hand how an unwanted child's life is a cruel reminder of the need for birth control - more than half the orphans she placed, while working in the Washington Children's Home in Seattle, were returned. Thirteen died. All grew up in abject poverty and ill health. Watching this was what helped propel her into government - she could not stand by and not try to help.

What disturbs me most about Sarah Palin is not that her political positions are different from Jeannette's but that, despite her identification with Christianity, I see no humanism in her stances. A direct corollary to her beliefs is the exclusion and "eternal damnation" of over sixty seven percent of the global population. How does presidential diplomacy fit into that paradigm? And, dare I say it, isn't this brand of wholesale intolerance patently anti-American? Frankly, although Jeannette didn't see herself as a "religious" person, I see many more similarities between her positions and, more importantly, her actions and those of Christ than I do with a woman who shoots defenseless animals from helicopters and denigrates community activism.

I hope that my film, "A Single Woman," about the life of unsung heroine Jeannette Rankin, will help bring to light the strength and beauty of a true maverick and reformer - an inspirational example of a woman who changed the American political landscape forever -- and for the better.

"A Single Woman," the story of Jeannette Rankin will be screening at the U.S. Congress on October 30th hosted by the office of Congressman Dennis Kucinich. The film is narrated by Martin Sheen, with the artistic contributions of Patricia Arquette, Karen Black, Peter Coyote, Frances Fisher, Mimi Kennedy, Margot Kidder, Judd Nelson, Elizabeth Peña, Cindy Sheehan, Chandra Wilson and a soundtrack featuring the iconic music of Joni Mitchell.