She was folksy. She was charming. She looked great. And yes — she was funny. Anyone who doubted that Sarah Palin would be anything other than those things obviously has not been paying attention to her over the past not-even-two months — the woman is good. And she was great on SNL last night, possibly because SNL pulled out all the stops to make her visit a memorable one, with the best and funniest episode in recent memory.

As great as it was to see Sarah Palin and Tina Fey finally cross paths on the same stage, the episode was memorable for a number of other special appearances: Alec Baldwin backstage to comically mistake Palin for the actual Tina (nice jab from Palin about how Stephen was her favorite Baldwin brother); Oliver Stone piping up from the audience during guest host Josh Brolin's monologue, whom he directed in "W."; and — Lorne Michaels in one of his guest turns backstage; and, last but not least — Mark Wahlberg, on set to punch out Andy Samberg for his imitation last week (thus establishing "Say hi to your mother for me" as a new SNL catch-phrase).

But the best part was the fourth-wall breaking of Alec Baldwin whispering in Tina Fey's ear after escorting Palin to the stage: "What?.....The real one?" Excellent. 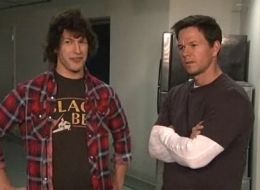 The fact that SNL has put so many of the sketches online is indicative of that — and they still left out some great ones, like Kristen Wiig's always-funny-but-suddenly-super-relevant Suze Orman impression; and Amy Poehler's hi-larious turn as a bar harlot using her enormous pregnant belly to flirt with men. Also, Brolin was a terrific host — really into it, never seemed to be reading the cue cards, very funny across characters. Enjoy him and the rest of the show in these videos from last night — plus a backstage extra with Palin, Fey, Michaels, Baldwin and more.