There have been so many lies and distortions pointed out in Sarah Palin's Going Rogue since it was released last week that her memoir has already become something of a gag line.

But perhaps the most embarrassing gaffe so far is her mis-attributed quote to UCLA basketball legend John Wooden.

As the epigram to Chapter Three, "Drill, Baby, Drill," Palin assigns the following remarks to the Hall of Fame hoops coach:

Our land is everything to us... I will tell you one of the things we remember on our land. We remember our grandfathers paid for it--with their lives.

Only the quote wasn't by John Wooden. It was written by a Native American activist named John Wooden Legs in an essay entitled "Back on the War Ponies," which appeared in a left-wing anthology, We Are the People: Voices from the Other Side of American History, edited by Nathaniel May, Clint Willis, and James W. Loewen.

Oops! That's not quite the sentiment that Sister Sarah was trying to convey as she guzzled down sugar-free Red Bull and cranked up Toby Keith's "How Do You Like Me Now?" while jumping on her patriotic high horse at the opening of the third chapter.

There's also no small amount of irony in the quote, given Palin's abysmal record on Alaska Native issues during her truncated term as governor.

I was a huge UCLA basketball fan as a kid. Whenever the Bruins came to the Bay Area, I did whatever I could do to snag a ticket. I loved to watch Wooden coach. But I never figured the Wizard of Westwood as an advocate for radical land distribution. 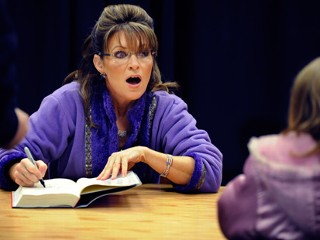 Obviously this one slipped by Sister Sarah and her crack team of investigative journalists Lynn Vincent, Meg Stapleton and Ivy Frye, as well as all those dutiful fact checkers at HarperCollins. Obviously, they didn't get the quote from anything Wooden ever wrote, but from a cute little web site called The Quote Garden. Isn't that sweet?

Okay, I was a little leery reading Palin's book and wondering if she really had read Aristotle and Plato. Somehow I didn't think so. But I thought, maybe, just maybe, she might have read Sir John. Apparently not.

But just because we're all good sports here at HuffPo, I thought I'd save the former Governor (can you imagine what Wooden thought about her quitting?!) a little bit of time, and here are five actual Wooden quotes, courtesy of the Christian Science Monitor, that she might want to take to heart:

1. It's the little details that are vital. Little things make big things happen.

2. Failure is not fatal but failure to change might be.

We'll see if the second printing carries a correction.