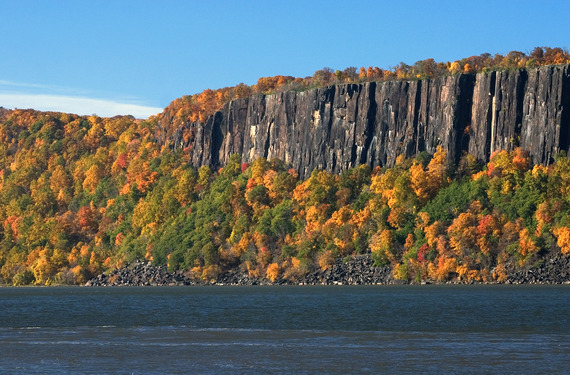 The town of Englewood Cliffs, New Jersey, recently changed its zoning ordinance to allow the building of a corporate headquarters for LG Electronics that will rise, for the first time, above the pristine tree line along the northern stretch of the New Jersey Palisades, one of the most beautiful and iconic views in the United States. The only thing that can stop this development is public opinion.

The Palisades Interstate Park Commission was created in 1900 by the states of New Jersey and New York to protect the cliffs of the Palisades, an internationally significant geological formation. Palisades Interstate Park, stretching 12 miles north of the George Washington Bridge, was dedicated in 1909. To further protect the Palisades, a narrow strip of land at the summit going west from the edge of the escarpment and running the length of the park, was purchased by John D. Rockefeller and donated to the Commission in 1933. Existing buildings along the summit were removed to return the tree line to its unbroken natural state, followed in 1948 by construction of the Palisades Interstate Parkway, complete with overlooks and service buildings, hidden from view among the trees. The parkway was completed in 1958, since which time the Palisades have stood pristine, surrounded on both the New Jersey and New York sides by some of the densest development in the world.

For over 80 years, the New Jersey communities along its western edge have honored the protection of the tree line by adopting zoning ordinances which kept new buildings low. Now, the Borough of Englewood Cliffs has permitted LG Electronics to move forward with the construction of a corporate tower -- at a point where the protected strip of park land is only 1/8th mile deep. The borough surpassed the height limitation of its earlier zoning legislation by four times, allowing a building that would rise 143 feet, well above the once-protected tree line. Proponents of the project have sought to emphasize the economic and environmental benefits of the new office tower, especially job creation and energy efficiency. But the same economic and environmental benefits would accrue from a low rise building of the same square footage. The modified zoning regulations will alter the landscape and viewshed of the Palisades and will potentially set a precedent for more buildings above the tree line.

The Borough of Englewood Cliffs is within its rights to revise its zoning ordinance, following due process, and allow LG to construct its tower. But the proposed construction has caused a public outcry from a coalition of community groups and conservation organizations concerned with the loss of this important natural and cultural resource. They have filed suit to curb the proposed building's height, but the New Jersey court has allowed the development to move forward. An appeal is underway, which will be heard this spring or summer.

Because of the threat, the Palisades viewshed was included on World Monuments Fund's 2014 World Monuments Watch. Four living former governors of New Jersey have written to the Borough of Englewood Cliffs asking for a reconsideration of the project and the construction of a lower building. In recent weeks, the National Park Service wrote two separate letters to the borough clearly stating its opposition to the project and urging reconsideration. An advocacy group, Protect the Palisades, is collecting signatures to oppose the development, and World Monuments Fund has a petition on Change.org for the same purpose.

A national treasure is at risk, but it may not be too late. A strong public response might still convince the borough to maintain its current low-rise ordinance and LG Electronics to drop its high-rise plan, thus continuing to protect the integrity of this internationally acclaimed natural resource.