According to sworn testimony Thursday during federal court proceedings in Alaska, two close associates of former Governor Sarah Palin -- Joe Miller, a staunch political ally of Palin's whom she supported in his failed bid for the U.S. Senate; and Palin's former director of boards and commissions Frank Bailey, more commonly known in Alaska as Palin's "hatchet man" -- were responsible for introducing FBI Informant William "Drop Zone" Fulton to Schaeffer Cox, the leader of the so-called Alaska Peacekeeper Militia.

Cox and two other Fairbanks-based militiamen have been charged with conspiring to kidnap and murder Alaska judges and law enforcement authorities. They have also been charged with violating various federal weapons laws for owning or attempting to purchase machine guns, silencers, hand grenades and other combat-type weapons.

The surreptitious meeting between Fulton, Cox and Palin's associates took place a scant six months before Palin was selected by John McCain to serve as his running mate on the GOP ticket. Cox, a supporter of Palin's, was then a Republican candidate for the Alaska House of Representatives, District 7. He finished with 36 percent of the votes. 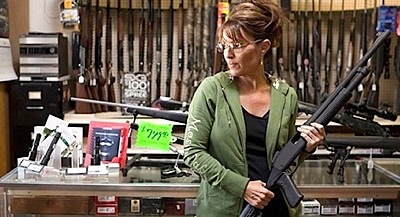 Cox's trial, now in its third week, has revealed the bizarre cultural and political milieu in which Palin came to power in Alaska and which eventually catapulted her to a national stage.

The introduction of Fulton to Cox took place in a suite at the Captain Cook hotel in Anchorage during the 2008 Alaska Republican Convention, at which Palin and her minions were trying to execute a political coup d'état against Palin's longtime Republican Party nemesis, Randy Ruedrich.

The convention -- and Palin's sub rosa role in it -- was to become a catalyst for both swelling anti-Palin sentiment in Alaska (well prior to her vice-presidential selection) and for Anchorage-based activist Andree McLeod to launch her own good-government crusade against Palin.

Palin's feud with GOP kingpin Ruedrich was longstanding and well-known throughout Alaska prior to the convention. What wasn't known until now is that Palin's forces at the convention were working in concert with some of Alaska's fringe elements, including Fulton, who testified last week that he, Miller and Bailey had met with Cox to discuss political "strategy" in Anchorage.

McLeod, a former close ally of Palin's who had helped her to launch her statewide political career, was an eye-witness to many of the machinations of Miller, Bailey, Fulton and Palin's longtime gopher, Ivy Frye, at the convention. She said it all had the feel of a "paramilitary operation," replete with Walkie-Talkies and a "strange paranoia."

"I felt like I traveled to the Twilight Zone," McLeod declared. "Having previously attended GOP conventions and meetings, it was surreal to initially observe Fulton's menacing conduct, and then to watch the scenes unfold as if they came straight out of a movie script." Indeed, McLeod was so curious about Fulton's behavior in particular that she queried him about his activities. "He told me that he was providing 'security,'" McLeod recalls. At one point she witnessed Fulton and three other of his associates surround Miller while exiting an elevator "and they marched off in military formation."

McLeod, who also was in direct conversation with Frye at various points throughout the afternoon, contends that Bailey and Frye were in constant contact with Palin via cell phone throughout the convention. "That's when I knew that Sarah wasn't looking out for what was best for Alaska," McLeod asserted. "She was only looking out for what was best for her." McLeod also witnessed Miller and Frye leave the convention together and depart -- again, under Fulton's paramilitary protection -- in a white SUV. "It was all really strange," she said. "It was like Black-Ops."

The troubling nature of the Fulton-Miller-Bailey activities convinced McLeod that Palin had conspired with members of her administration to oust Ruedrich, all while working on government time. She filed her first Freedom of Information Act request against Palin and her administration as a result of her suspicions.

While McLeod wasn't able to identify any emails related to the alleged convention conspiracy (Bailey had by then orchestrated a secret, extra-governmental email system that circumvented Alaska's open government laws) there were two significant outcomes that would eventually lead to Palin's political downfall: 1) McLeod says she discovered emails indicating that Palin and Bailey had violated state personnel protocols in the hiring of a state surveyor. As a result, McLeod filed the first of several Ethics Act complaints against Palin's administration; Bailey eventually was required to undergo "ethics training" because of the "troubling nature" of his emails; and 2) McLeod's resulting cache of some 20,000 Palin emails proved to be a goldmine for national reporters during the 2008 presidential election seeking substantive background information on Palin.

Bailey makes no mention of this extraordinary meeting with Cox and Fulton in his not-so-tell-all book, Blind Allegiance. Nor does he address his, Miller's and Frye's efforts to oust Ruedrich at the convention. It's yet another Bailey cover-up.

In fact, Palin had longtime ties to the right-wing, anti-government fringes of Alaska politics. Despite her duplicities to the contrary, Palin's husband, Todd, had on three separate occasions registered as a member of the Alaska Independence Party, which called, at the time, for the secession of Alaska from the Union. Palin also produced a glowing video on behalf of the AIP welcoming them to Fairbanks for their statewide convention earlier that year.

In 2009, for my book, The Lies of Sarah Palin: The Untold Story Behind her Relentless Quest for Power, I interviewed Mark Chryson, chairman of the AIP from 1995 to 2002, who talked about the various ways his movement supported Palin during her tenure as mayor of Wasilla (he claims Palin attended the AIP convention in 1994.) One former militia member I interviewed in Talkeetna with direct links to Cox said that the Palins -- "especially Todd" -- were "sympathetic to our cause." That Palin and her minions would associate with Cox -- and seek out his counsel for political "strategy" at a time when she was being considered as a potential vice-presidential nominee -- is further reflection not only of her fringe political views but also of her warped political judgment.

If former Senate candidate Joe Miller is one step to the right of Atilla the Hun, Schaeffer Cox is somewhere out in the ozone. In addition to being a gun rights advocate, he has also run afoul of the law for domestic violence. In 2010, according to the Fairbanks Miner, "Cox pleaded guilty to reckless endangerment and is sentenced to two years probation for allegedly punching and choking his wife during a car ride to visit his mother-in-law in Anchorage." Less than two weeks later he was charged with "fifth-degree weapons misconduct" for carrying a concealed handgun. Cox also believes that the Alaska judicial system is a "for profit private corporation"; some of Cox's supporters held a trial at a Denny's restaurant in which he was "exonerated" of all charges.

Fulton's bio is equally bizarre. In October of 2010, Miller hired Fulton and two of his Drop Zone Security employees to provide security for a campaign forum at a public school. At the event, Fulton and his associates handcuffed and detained Tony Hopfinger of the Alaska Dispatch for alleged trespassing charges -- this while Fulton was acting as an FBI informant. When Fulton suddenly disappeared last year, there was widespread speculation that he may have been murdered. In March of last year, his attorney, Wayne Anthony Ross, a Palin loyalist whom she nominated for Attorney General (he became the first such nominee ever rejected by the Alaska Legislature) announced that Fulton had signed over his two homes to him.

Miller's relationships with Fulton, Cox and, of course, Palin have been well documented. His campaign manager Randy Desoto recently praised Palin in a blog on Miller's web site following her appearance at the Conservative Political Action Conference in Washington, at which Palin delivered the keynote address. Many think that Miller will run against Mark Begich for the U.S. Senate in 2014 and will once again seek Palin's support.

This sordid cast of characters reflects the roots of Palin's support in the Last Frontier -- support, as my friend Phil Munger at Progressive Alaska notes, that has now played out its course. McLeod also says the surreptitious activities involving Cox, Fulton, Miller, Bailey and other Palin cronies at the Captain Cook in March of 2008 reflect another side of Palin as well. "It was a coward's way out," McLeod says of Palin's decision to stay away from the convention while others acted in her stead. "She doesn't have the guts to confront people face-to-face. She uses surrogates. It was another cowardly move on her part."