Palm Sunday is a Christian holy day that marks the beginning of Holy Week and commemorates Jesus' entry into the city of Jerusalem. In 2014, Palm Sunday will be celebrated on April 13.

Although Jesus' entry into Jerusalem is recounted in all four canonical gospels, the traditions of Palm Sunday are largely based on the description from the Gospel of John.

By waving palm branches and using them to cover his path as he rode into the city on a donkey, the crowd indicated that he was revered and respected on the level of royalty, and in doing so, challenged the power of the Roman empire and priests that ruled Jerusalem.

To celebrate the occasion, many Christian churches -- both Catholic and Protestant as well as the Eastern churches -- distribute palm leaves to congregation members who then carry them in a procession either inside or outside of the church. Often the palm fronds are knotted or woven into small crosses that can be kept by individuals in their homes as a reminder of the lessons of Holy Week. In areas of the world where palm leaves are not readily available, other native plants may be substituted and Palm Sunday may be alternatively referred to as Yew Sunday, Willow Sunday, or whatever else is used in that locality.

For Christians, Palm Sunday marks the beginning of the final week of Lent and the events leading up to the crucifixion of Jesus on Good Friday and his resurrection on Easter. It is also connected to the following year's liturgical calendar as the palm leaves are often returned to the church to be burned in the next year's Ash Wednesday rituals. 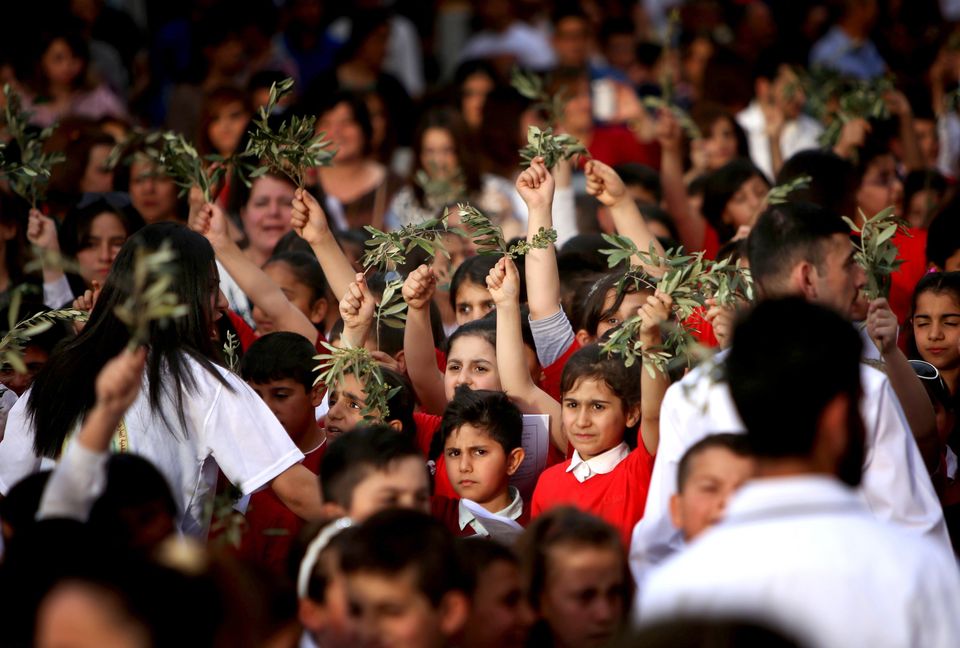 1 / 48
IRAQ-RELIGION-CHRISTIAN-PALM-SUNDAY
Iraqi Christian youth hold up olive branches as the gather at the St. Joseph church in Arbil, the capital of the autonomous Kurdish region of northern Iraq , on April 12, 2014, to celebrate Palm Sunday that marks the triumphant return of Jesus Christ to Jerusalem when a cheering crowd greeted him waving palm leaves the week before his death. AFP PHOTOS/SAFIN HAMED (Photo credit should read SAFIN HAMED/AFP/Getty Images)
Getty Images