Caroline Reid cannot step four feet into an airport without being mobbed and she has no one but herself to blame. The Australian comedian, better known as her hilariously raunchy flight attendant alter ego Pam Ann, has toured the world thrilling airline industry employees, gay fans, and the occasional straight person for over 15 years.

Reid's one-woman shows are heavy on audience participation, stereotypes about the different airline crews, parody videos, and a unique brand of shock humor that isn't afraid to offend for a laugh.

The comedian has worked with several airlines including an advertising campaign for British Airways and a partnership with JetBlue, appeared on "Project Runway UK" and "Britain's Next Top Model," accompanied Cher on her 2004 Farewell tour, and regularly plays to sold out audiences around the world. She was also labeled "cruelly funny" by Madonna, which is pretty much the highest accolade a human being can hope to achieve.

Huff Post Gay Voices caught up with Reid on the eve of the opening her new show, "Pam Ann -- Cockpit!" playing at the XL nightclub in New York City, to chat about her outrageous character, why she's not worried about offending people, and what's next on Pam Ann's list of things to do.

HuffPost Gay Voices: Where did the Pam Ann character come from?
Caroline Reid: I was always having dress up parties in Melbourne and I had a themed birthday party -- it was a James Bond theme. In the '60s James Bond only flew Pan American, so I dressed as a Pan Am flight attendant and got absolutely [wasted]. When you say "Pan Am, Pan Am, Pan Am" -- after so many cocktails it's "Pam Ann." So she was sort of born out of a name when we were all shit-faced. And I love the whole jet set era but she was basically born out of a bottle of vodka. I used to do acting, I guess. The extent of it was a mute role as a revolving door in "Prometheus Bound" -- I didn't even get the play, I was just a door. That's when I first found out I was funny, because I took the piss out of the play -- it was so boring! I never got any acting roles because I can't audition -- I'm terrible. I'm dyslexic when it comes to reading print off a page, so I thought the only way I'll ever succeed is if I do it myself. It was kind of born out of being a bit retarded.

How much of you is in the character?
She's totally like me in terms of where my passion comes from. I'm totally passionate about the airlines and the industry and the things I talk about are totally my opinion. I think someone like Dame Edna is such a fictional character. He's such a genius actor and performer. When he's in character, he's really in character. But I'm completely the opposite. If I'm Pam Ann I can be me, I can be Pam Ann -- there's kind of no line. It's me putting a costume on and going out there and talking. I guess it's me being more confident on stage because I was very shy as a kid. I guess it gives me a voice. In real life, day to day, I'm not that aggressive. Although, if I'm pre-menstrual and I've got a boyfriend… [Laughs]

How much of the show is scripted and how much of it is off the cuff?
When I did the Triad [Theatre], pretty much the whole show was flying off the cuff. But you have trigger words in your head, so if someone says something you have a response ready. But the [recent] show in London, because I was doing three weeks, six days a week, and it was a big theater, the show turned into something quite scripted because you're doing show after show after show. There is the freedom to be free with it and run off into different areas but it kind of became quite structured. It feels like it's not, but if you came the next night, it was the same material.

How do you respond to those who say your material is offensive?
You can't please everyone. And if I did listen to everyone, then I wouldn't be doing what I'm doing. In life you're going to offend or you're not going to offend and I think it's better to offend than be mediocre. A lot of people get offended over things that they don't read properly or they don't listen to properly because the underlying theme is a message from me. They're only seeing the top surface. If they really, really listened or talked to me they would understand what I'm saying. Especially if I say anything about AIDS, the amount of people that come at me! I'm like "Fucking hell! You guys completely get that wrong and it's time to lighten up! And you're not seeing the point that I'm making." People are easily offended because it's easy to be offended.

And it's obviously satire. It seems like those who are offended don't really understand what you're doing.
Exactly. I'm the most open-minded person and I thank my parents for that. So I'm very fortunate that I don't live in a world of guilt with religion or whatever. When I do [my Asian character] Lily, I'm the first person to be doing it in Singapore or Japan -- I'm not scared about that because I know in myself that it's not coming from a racist place. The people that come up to me and say something about Lily are white -- white -- people. It's never Asians. It's like how I talk to my gay friends -- I say, "Hi, poofter, how are you?" I talk to them like that. And they say "Hi, slut. Hi, Whore." And I say, "Hi!" It's just the way we talk! And I think people get confused. It's interesting the demographic that is offended by things.

Speaking of poofters, how did your relationship with the gay community begin?
To be honest with you, I left home when I was 17 -- ran away pretty much. The gays -- the trannys, actually -- took me under their wing. I've sat through 12 hours of Miss Universe with two of my tranny friends, so I know all the moves. I was groomed from a very young age -- my world was the gay world. It was something that I felt drawn to because I felt free. I never stepped foot into a straight club. Neither has my brother -- he's straight. But he's at every gay club chewing his face off. And my parents are like "What?" Neither of us have married or had kids. I think my parents think I'm a lesbian or a drag queen [laughs].

My whole world's gay and I wouldn't have it any other way! I've never felt comfortable in the [straight world]. Growing up in the gay bars, it was the drag queens that were the ones who inspired me to do shows. So it's a product of my environment. I relate to the gays because I'm more like them. Most of my gay friends are filthy and we joke about shit and share foul photos, so when I do talk like that on the stage and there are straight people there I say, "Oh! I'm sorry if you're offended by this because in my world, we're not."

I've been very privileged to have grown up in a world where it's more free -- it feels that way, anyway, because the straights -- some of them -- aren't. I remember sitting around with six drag queens from Melbourne and I just got this TV show and I was really down on it and they were all attacking me and saying, "How can you be down on that!? You're lucky you've got a fucking show!" and it's seven in the morning with these drag queens that look like they're from "Priscilla Queen of the Desert." They were like my mentors.

And Pam Ann herself comes across as pretty draggy.
They taught me. I say, "I went to the Drag Tranny School of the Arts!" [Laughs]

What's next for Pam Ann?
I really want to do a Pam Ann movie. A kind of "Absolutely Fabulous" meets "Austin Powers" in a '70s airline diaster film. My boyfriend came up with the opening sequence already -- he's really creative. Who knew -- he's a U.S. Marine. It's like, "Where the fuck did you get [the creative] gene from?" [Laughs] In the opening credits I go out for a cigarette and I work for Pan Am and I'm in Switzerland and a bit of ice falls on me and I become entombed in ice with a cigarette and smoke rings. The opening sequence is an animation of this ice cube going all around the world, past the Eifel Tower, and it ends up in the TSA and they crack it open and I'm from the '60s and suddenly I'm in 2013. And they say, "Who are you?" and I say, "I'm Pan Am," and they say, "Pam Ann?" He thought of it! It's genius. That's as far as I've gotten. And he wrote that.

I love the video clips you show during your act, so if it's in the same vein, it'll be amazing.
And it would have to be filthy and offensive to a lot of people [laughs].

Of course. Like "Austin Powers" meets the Bond films meets "Borat."
Exactly! "Borat"! With some real cabin crew in it as well. I think she needs to find out where she's from so she goes to Lufthansa and she goes to all the airlines to find out where she's from and she ends up in New York with some really old women who used to work for Pan Am [laughs]. And Christina Ricci needs to do a cameo! I've got a new video from my new show where I've inserted myself into the "Pan Am" ABC series. It rocks that TV show so much -- it's how it should have been. When there's the opening credits with all the girls walking with their hands out and they're going onto the plane and there's a little girl smiling? Well, I turn around and give her the finger and she loses her smile quite fast. That's a little preview. [Laughs] My guy in London came up with all of it -- I give him full credit. I just go and do it. He comes up with some amazing stuff.

What else?
I found some old footage from when I did the Cher tour back in 2004. I did a video diary. So I'm editing that at the moment. I'd like to do a behind the scenes of the Cher tour. It's a bit more reality and a bit more Caroline. I was a lot thinner back then [laughs]. But otherwise the movie is the biggest thing. There are so many things I'd like to do but it's such a hard industry to break into.

"Pam Ann -- Cockpit!" plays New York City's XL Night Club May 25 and 26 and June 1 and 2. For tickets and full details, click here. For more info on Pam Ann, visit her official Facebook page and follow her on Twitter.

See photos and videos featuring Pam Ann in the slideshow below: 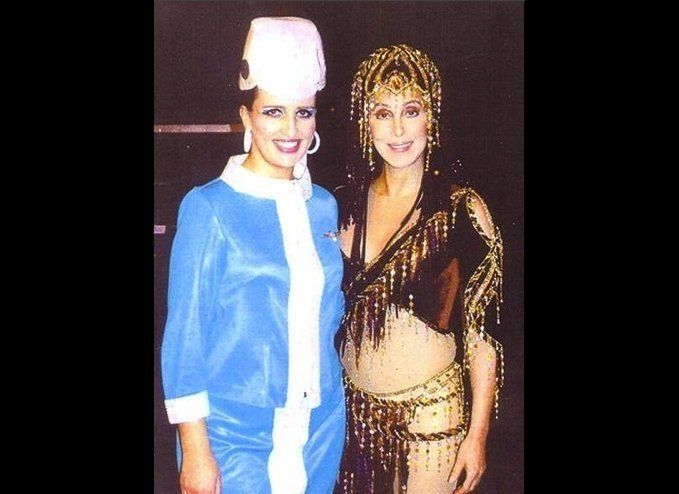 1 / 5
Pam Ann And Cher
I supported Cher on her U.K. Farewell Tour. If I could turn back time, I would do it all over again -- she was the best mentor anyone could have.