Pam Douglas: The Pulse of Our Time

Pam Douglas has a nearly alchemical gift for transmogrifying materials beyond their conventional aspects, in the service of emotionally rich, conceptually profound mixed media works that bridge the divide between gestural abstraction and allegorical narrative. Her compositions merge specific symbolism with esoteric poetics, employing painting, drawing, rope, string, sand, wood, resin, newsprint, and whatever else will satisfy the demands of her vision. Hers is a directed but phenomenological process, in which forces of the natural world like gravity, entropy, the human heartbeat, and the fractal math of flocking birds, clouds, and mountain ridges are elements of both organizing and executing compositions. 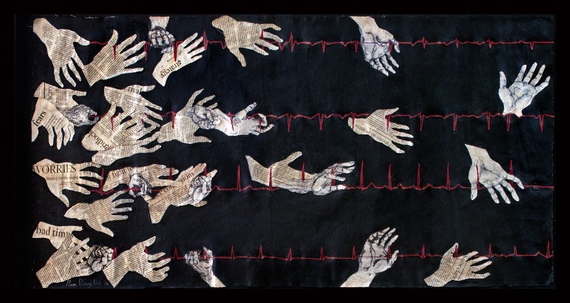 Her newest series, RHYTHMS, was inspired by the punctuated scrolling lines generated by EKG scan outputs. With an almost musical cadence and a seismographic syncopation, these machinist lines translate sound into image in the most compelling abstract way, but at the same time resist the label of abstraction since, in fact, they are as specific, literal, and as individual as portraits. Using the idea of rhythm as a bridge from human experience to the natural world, juxtaposing the imagery of the body's mortality with suggestions of the endurance of the soul, Douglas organizes a suite of complex yet meditative, powerful but gentle stories of fear, faith, crisis, and peace. In pigmentation, these works use a predominantly red, rust, black, white, and earthy palette -- though there is a broadly bright spectrum emanating from beneath the fixed sand surface of Mandala. Like all her work, this painting contains secrets in its depths that continue to reveal themselves, unfolding in the most engaging way with further and repeated contemplation. 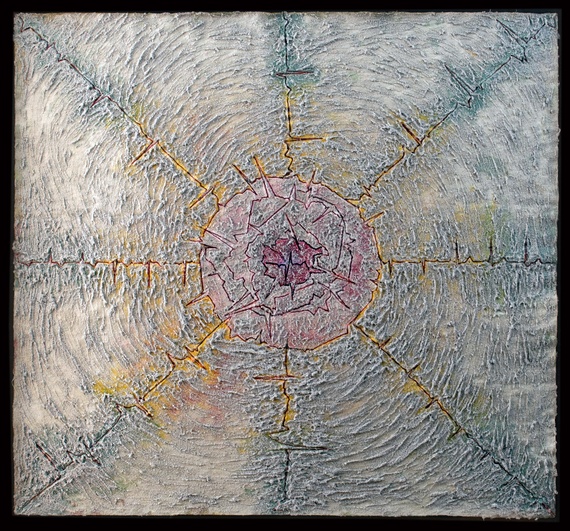 Currents, lava flows and the meaningful jagged horizons of mountains, clouds, and winter sunlight feel a presence in Texture of a Heartbeat and The Final Cadence. In works like Measures of Serenity and Waves of Change, Douglas uses string and rope in place of drawing, generating her own semi-abstract lines, placed according to the whims of gravity in ways both evoking and recreating fractal defaults like spirals and piles; at the same time evoking the witches of Macbeth who cut the string of each man's fate at the appointed hour. The hands in Letting Go create an organic smattering of images that pass across the dark background like leaves in a wind -- but in fact, some are fully rendered with advanced, expressive draftsmanship that shows each hand to be in its own state of tension or release. As with the similarly constructed flock of birds in The Pulse of Our Time, most are cut out from newspapers, and the texts of their contents is deliberately curated to tell the story of the burdens that threaten us and what it can feel like to move past them. 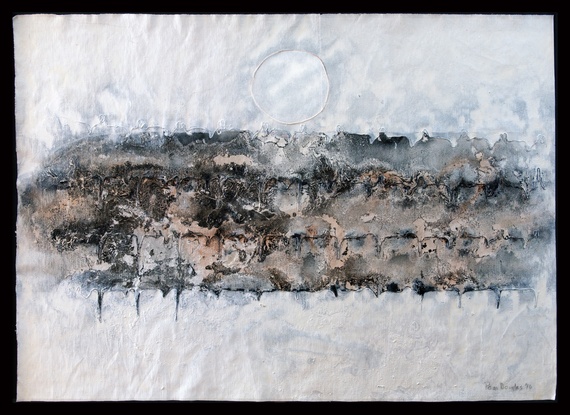 Pam Douglas: Texture of a Heartbeat 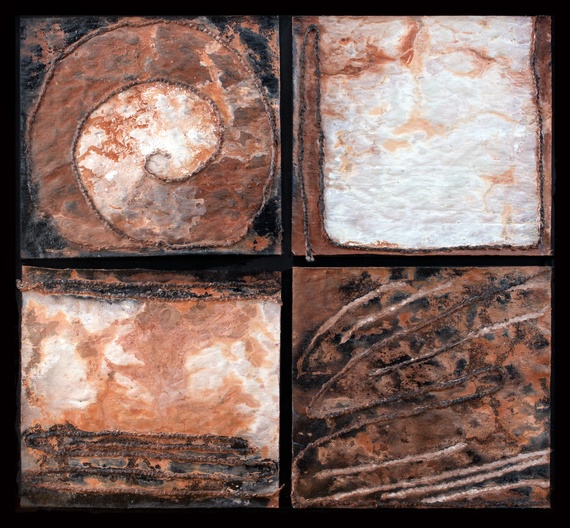