I wish you could've heard my reaction when my friend Sheva first told me last year that Pamela Des Barres was teaching a writing class in New York City for two consecutive nights. "Miss P," as Mick Jagger called her back in the day, was an icon of mine since the 1960s when she was a member of the all-girl LA-based rock band The GTO's (Girls Together Outrageously). The GTO's released one album in 1969 - the seminal and splendid Permanent Damage- produced by Frank Zappa. I could go on about this record's brilliance ("The Captain's Fat Theresa Shoes"; "I'm in Love with the Ooo-Ooo Man"; "The Moche Monster") but that's for another time, another blog post. Suffice it to say that Ry Cooder and Rod Stewart play on it, the songs were written by the likes of Lowell George and Jeff Beck, among others, and it has a gorgeous full color gatefold cover. Track it down, buy it, play it, and thank me later.

Miss Pamela kept a diary in high school that she continued through her young adulthood and her marriage to Michael Des Barres. Zappa encouraged her to keep up her writing, and she eventually published a book in 1987 that was based on the diary - I'm With the Band - an instant classic that has inspired other books, movies (Almost Famous), and of course, millions of young girls who also yearned to be "with the band." Pamela went on to publish other books about rock and roll from an intensely personal perspective and writes for several publications.

In the '60s, Pamela and her friends dressed in dreamy, flowing dresses with flowers in their hair, festooned with vintage jewelry, draped in feather boas. She had fallen under the spell of vintage clothing while in high school. While living in Laurel Canyon, Pamela served as de facto stylist to Led Zeppelin, Alice Cooper, and Rod Stewart at a time before stylists even existed for rock stars. Alice Cooper's entire look was directly attributable to Pamela and the other GTO's. She now runs an online site, Groupie Couture, which sells her own clothing as well as handbags and jewelry. "We have tons of vintage clothes, because that's what I love to wear." 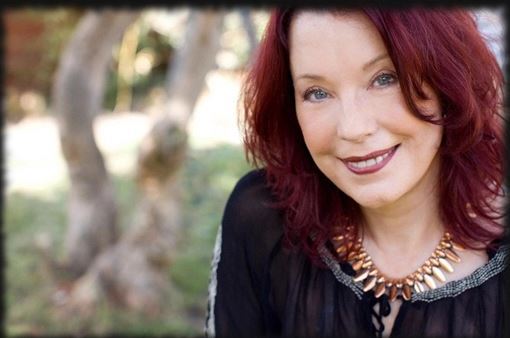 Miss Pamela has been teaching women's writing workshops for fourteen years. "It's not like any other writing class because the people who have read my books, or even if they just know who I am, they're music-loving people, they're creative people; they're a little oddball, they're a little unusual...much more expansive and accepting, open-hearted, open-minded people." After first conducting several workshops in Los Angeles, out of her home, she started to take them on the road. "I teach in ten cities now."

I had no idea what to expect as I entered the room the first time for class. What I found was astounding; a group of women that ranged widely in age from their twenties to their sixties. You would not think we would be able to find common ground - but we did, and easily. The nurturing space Pamela commenced to conjure up broke down any barriers and created, for those two evenings, a power circle. We shared favorite passages from books or songs that moved us. We wrote short essays responding to Pamela's prompts and read the pieces aloud to each other.

Hearing the writing of the other women raised and inspired us. I left that class fully rejuvenated and strengthened in my own writing, and signed up for the next one as soon as I heard about it. "The women open up almost instantly because of the camaraderie. Something I'm able to supply, and I still have no idea where it comes from, is a safe feeling in the room. A comfort level."

Currently Pamela is teaching a workshop in Toronto, and she will present a reading from I'm With The Band Thursday July 16 at Analogue Gallery in conjunction with an exhibition of portraits of her famous rock and roll boyfriends from the past.

A writing workshop is planned for Orlando at the end of August, and Pamela plans to spend the rest of the year working on her newest book, which Penguin will publish later next year or perhaps early in 2017. "I'm writing a book on the workshops, and that came about because an editor at Penguin came to my writing class. She was a fan, and just loved it, and suggested that I write a book about my classes. It is going to encompass a lot, not just the writing workshops, but how I got into writing; it's also going to have all the different prompts I have in class, and I'm using a lot of my students' writing - I love that I get to include my students' writing."

More information about upcoming workshops and other events can be found on pameladesbarres.com and Pamela's clothing line is at groupiecouture.com.