ABC's Pan Am is a bit dramatized when it comes to plot, but how accurate are the uniforms they use for their stewardesses and pilots? 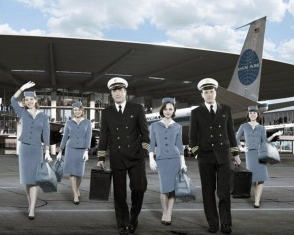 The original stewardess uniform was designed by the Californian couturier, Don Loper, who used a fabric shade called Tunis Blue. Suzi Callahan, a Seattle-based stewardess for Pan Am from 1967 to 1973, recalls the outfits, including the infamous hat. "Everyone hated the hats because they mashed down your hair; it was the age of big hair -- you'd rat your hair up a million miles high and then you had to put on a hat. Those bucket bags we carried often had hats sticking out of them," she recalls. Not wearing a hat or adding on a hair accessory, even something as simple as a tortoise shell barrette, could get you reprimanded.

All the stewardesses checked in at the airport with a flight adviser, who would give the women details about their flights, but more importantly, gave them the once over. "They made sure you were proper," says Callahan. Other rules she recalls include keeping hair above the collar ("Girls with longer hair would wear wigs with their hair stuck up"), and you couldn't wear eyeliner underneath the eyes ("The lighting in the cabin could make it look like you had shadows under the eyes"), and you had to wear a girdle with nylons ("They didn't want any flabby butts going up and down the aisle").

Stewardesses had to have two pairs of shoes: a 1 1/2-inch heel for wearing in the cabin and a 3-inch pair for walking through the airport and greeting passengers. Short white gloves were worn in the summer and to sunny destinations, while black gloves were worn to colder climes. The best part of the look? "We had marvelous purses," recalls Callahan. "They were big bucket bags that were well-designed for that age. Ours didn't have the big emblem on them like they do in the show promos, though."

Fred Reimers, who flew as pilot for Pan Am from 1967 to 1970, explains that the men's uniforms were modeled after the U.S. Navy uniforms "because the original Pan Am airplanes were called flying boats because they landed on the water," he says. "It was a black double-breasted suit jacket, white shirt, black neck tie and gold stripes to denote the pilot's rank." Like the stewardesses, men had to be well groomed. "They didn't allow beards and they had weight restrictions for both the men and the women," Reimers says. But the well-groomed emphasis fed the glamorous mystique of air travel: "People were very respected in their uniforms; they were distinct for both us as pilots as well as those in cabin service."