Archaeologists in northern Israel have uncovered what they believe to be a 2,000-year-old bronze mask representing Pan, the ancient Greek god of flocks and shepherds known for his love of music and sexuality.

A team of researchers from the University of Haifa’s Zinman Institute of Archaeology discovered the mask during a one-day dig at the Hippos-Sussita excavation site, just over a mile east of northern Israel’s Sea of Galilee and near what was once the ancient city of Paneas.

“The first thought that crossed my mind was, ‘Why here, beyond the city limits?’ After all, the mask is so heavy it could not have just rolled away,” Michael Eisenberg, the excavation director, said in a statement. 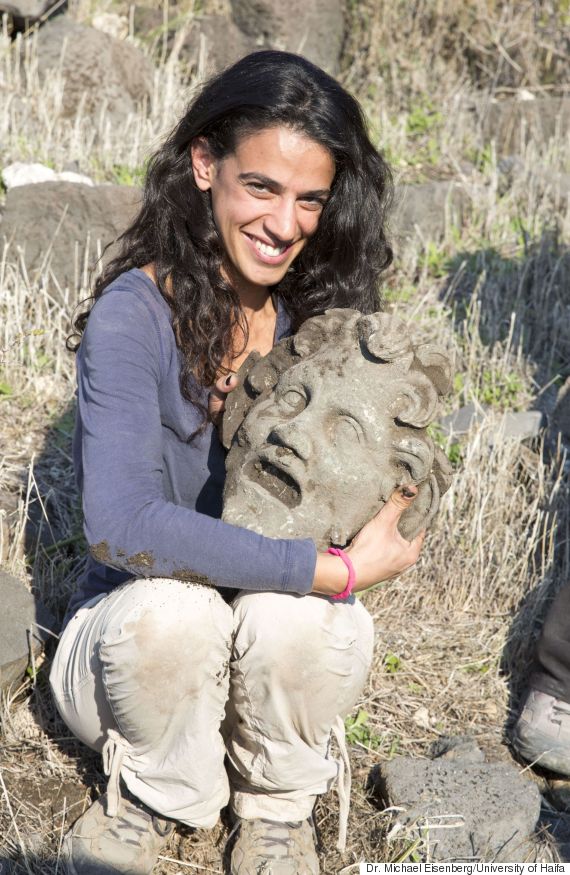 A researcher with the Hippos-Sussita excavation holds the bronze mask.

The mask is unusually large as compared to other such bronze Pan masks from the Hellenistic and Roman periods, according to a press release. It is, Eisenberg told HuffPost, "the only one of its kind" and measures a foot in height and width and weighs more than 10 pounds. The figure has long, pointed ears, horns, strands of a beard and other characteristics associated with the half-man, half-goat god.

The mask may have been used as part of an altar for Pan or as the head of a fountain and dates back to between the first and second centuries, Eisenberg said. It was found in one of the rooms of a large basalt tower, which may have served as part of the city's outer defense.

Although Pan hails from Greco-Roman pagan traditions, ancient worship of the god -- called Faunus in Roman tradition -- has been documented in Israel. Paneas, also called Banias, is now a nature reserve and archaeological site near the ancient city of Caesarea Philippi in the Golan Heights. The city was located within the region known as the "Panion,” named after the deity, and housed shrines and temples in his honor.

“A Pan altar on the main road to the city, beyond its limits, is quite likely,” Eisenberg said in his statement. “After all, Pan was worshipped not only in the city temples but also in caves and in nature.”

Paneas was home to a well-established cave temple to Pan, the researcher said, which may explain why the mask was uncovered just outside of city limits.

“Because they included drinking, sacrificing and ecstatic worship that sometimes included nudity and sex, rituals for rustic gods were often held outside of the city,” Eisenberg continued.

Excavations of the Hippos site will continue this summer with the goal of clarifying how and why this unusual mask came to be, Eisenberg told HuffPost.