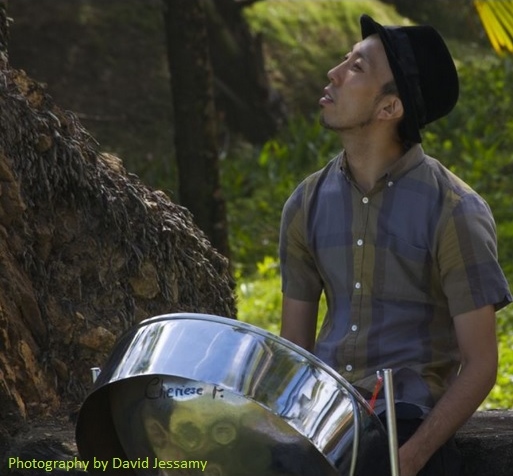 That was the European, Christian take on the pagan, pulsating, infectious beat of the African drum. Its primal edge scared the living daylights out of them. It unleashed sensuality, social revolt and spirituality of another kind, something forgotten, primordial, Mother Earthly and definitely anathema to colonial values.

"Surrendering to this music is essentially a communion." -- Thierry Teston, director, PAN! A Modern Odyssey

The shock to the system Europeans experienced when they heard this lower chakra vibration is not difficult to comprehend. Their primal connection to the drum had been violently severed more than a thousand years ago, when their ancestors were colonized by a Roman Empire that would soon become a Christian empire. The iron-fisted Church banned all displays of sensual, passionate self-expression tied to their pagan religious rites. Their Celtic, Norse, Gothic drums had long faded into the background, becoming one uniform, metronomic, marching beat for the new military empire. String and wind instruments took the spotlight. It was beautiful music that stirred the soul, but only from the waist up. As custodians of the imperial status quo, they would resist the influence of the African drum (among other indigenous tribal rhythms) in every territory they claimed for crown and church.

The demonization of "negro" music in the Americas would extend to blues, jazz, samba, calypso and rock 'n' roll, which met a wall of censorship and condemnation. From the censoring of Elvis' illicit hips on Ed Sullivan, to the mounting fear as white children began doing the Watusi and eventually wanting to integrate the concert halls and dance floors, to the fear of hip-hop's revolutionary edge, many commercially successful movies and documentaries hearken or hint at the establishment's fight against Afro-influenced music.

The soon to be released docu-drama PAN! A Modern Odyssey does more than hint at it. It tackles it head on with a heavy spiritual message of universality. It tells the story of the notoriously ingenious, multicultural people of Trinidad and Tobago, who fought to hold on to their African drum and in the process created the steel-pan, the only new instrument to be invented in the 20th century.

I had the pleasure of chatting with producer Jean Michel Gibert, a Frenchman who fell in love with the culture of the twin island and never left. Jean Michel is one of the most celebrated champions of Trinbagonian culture. He has produced musical artists such as 3 Canal and made several documentary films on Trinidadian musicians -- among them, Calypso @ Dirty Jims, Soca Power, In Trinidad (featuring the most successful soca artists such as Machel Montano and Bunji Garlin) and Calypso Rose, The Lioness of the Jungle.

Right away, he opened with the story of the struggle, stating;

"From the inception of pan, you can trace back as far as 1828, the banging of the drum was banned during slavery up to the Canbouley Riots (Canbouley is the patois of cannes brulées , or 'burnt cane.' The slave-tended sugar cane fields were burnt before harvesting, a dangerous process that often cost many slaves their lives). This gave birth to the Tambu Bamboo (percussive instruments made of bamboo) and it too was criminal. It is really a history of contestation and revolution and through this the people made the evolution to this incredible instrument. It was people fighting for their freedom of expression."

What, or rather who, guarantees PAN! will be the finest production Jean Michel has done to date are Dr. Kim Johnson, writer of the documentary and director Theirry Teston, or as I like to call them, The Steel Pan Guru and The Pan Devotee.

Dr. Kim Johnson is a Trini-born senior research fellow at the Academy for Arts, Letters, Culture and Public Affairs at The University of Trinidad and Tobago (UTT) and is the foremost expert on the historical, social and artistic poignancy of the steel-pan. A pan lover since childhood, he has dedicated his life to ensuring the steel-pan is remembered by generations to come, writing four books on his first love. The Illustrated Story of Pan (2011, Published by UTT Press) is a must-read for anyone who needs an introduction. Describing the music documented in PAN! Dr. Johnson says:

"The elaborate ten-minute arrangements on which every band has worked arduously for the preceding six weeks, players learning their complexities by rote, are our New World symphonies. They sing of our past and our hopes for the future, our imagination and our humanity. They are our Taj Mahal and our Ode to Joy. Yet the steelband movement is not primarily the creation of intelligence or creativity or talent, even though all of that and more went into the mix. Rather, steelband was and still is ultimately a product of the purest love. It is celebration of transcendent beauty and freedom."

French-born Thierry Teston is an award-winning documentary filmmaker, whose passion for translating the world of dance and music to the medium of film and telling the story within the story of the art can be seen in films such as La cité de la danse (2011/2012).

He was a child when his parents returned from their Caribbean vacation with a 33-inch vinyl record of steel-pan music and he was captivated. Unlike Dr. Johnson, Thierry would have to wait 25 years before he could visit the Mecca Of Pan, which calls thousands of people from around the globe to compete in the annual Panorama, with hundreds of orchestras, some up to 130 strong.

He describes his first visit to Trinidad thusly:

"My eyes met those of these people from the whole world, and I discovered the universality of their story, that carries in it the genesis of the all the political and cultural battles of our civilizations: the liberation and the affirmation of the individual through art, in the face of oppression."

The epic of PAN! takes the viewer on a whirlwind journey back in time to the 1800s and 1940s as Trinidadians resist attempts by their British colonial masters to stamp out their African drumming. When the goat skin drums of their African heritage were taken away, they turned to bamboo. These drums would also signal their emancipation from slavery and provide the soundtrack to the Trinidad Carnival, which would evolve into The Greatest Show On Earth and spawn the largest street festivals in the Western world, in Brooklyn, Notting Hill and Toronto.

Bamboo gave way to metal percussion and eventually the 55-gallon oil drum, which were readily available because of a dynamic oil industry. The pentatonic African drum became a fully chromatic instrument able to play increasingly intricate symphonies. When the colonial government came to take it away, the youth, seeing the beginning of something truly powerful, resisted the persecution of law enforcement, the church, condemnation of their parents and exclusion from "respectable society"; persevering until the pan worked its magic. Eventually, the entire country fell under its spell and soon the world, when they heard modern pop tunes, jazz and of course calypso (another musical art-form birthed in Trinidad which would later be infused with the rhythms of India to produce soca and chutney music), translated through the pan.

Interwoven with this dramatic historical retelling are compelling modern-day documentary tales of young people also struggling for their independent expression. Eva Goldstein is on a pan pilgrimage, seeking to honor her late father's unrealized dreams by playing in the Panorama finals. Can she get into the Desperadoes Orchestra in time to compete? Ten-year-old Jevanni Clairmont is the grandson of the founding member of the Trinidad All Stars Steel Orchestra. He hears pan calling him and must fight to play against his mother's wishes. Berklee College Music phenom Keith Marcelle is an American trying to internalize his Trinidadian heritage. Shivana Ragoonanan has been playing Indian music on pan since she was four years old and wants to branch out and make a name for herself like her father, a key player for the Tunapuna All Stars. Onishi Yukari, Tagaw Sayori, Sasaki Kentaro and Ninomiya Chihiro left job security in competitive Japan, for a chance to play with one of Trinidad's top orchestras Phase II. With little to no English to aid them, will they be able to keep up with the grueling rehearsals?

Whether it is a mass of sweaty, multi-hued bodies on a dance-floor transported to a higher mental plane by the thump, thumpa, thump or a mass of colorful people of every creed playing the pan, swaying in time, striking in time with split second precision, like one mass organism, the African drum has been calling us home. The beat reveals our common connection to the earth and each other.

As the director of PAN! so beautifully describes it:

"Surrendering to this music is essentially a communion. ... every steel-band is a united family, where everyone, players and guests alike, eats at the same table, no hierarchy, no class, no race, and everyone is served the same musical work. And in a world so divided and opposed, I cling to such stories of human transcendence."

PAN! A Modern Odyssey is in the final phases of filming the elaborate, costumed 1800's segment of the docu-drama. Want to support the movie or get involved? Visit the website.