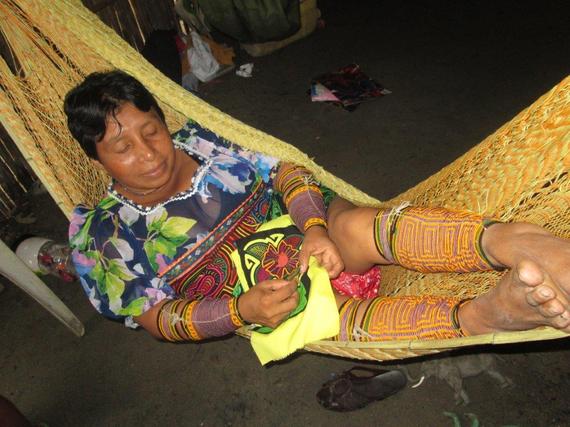 San Blas Islands, Panama...If you're seeking cutting-edge, off-the-beaten-path adventure rich in Mother Nature and Indian heritage, look no further. The rainbow parfait culture of the Kuna Yala Indians in the San Blas Islands off Panama warm your heart and soul. I have traveled to this remote paradise after earlier visiting the divine Frank Gehry BioMuseo, the Miraflores locks of the canal and other sizzling attractions in Panama City on other sojourns. I also visited the Embera Indians of the Darien Jungle. But this getaway is to fully embrace the Kuna traditions, legends, culture and their distinctive molas, a Panamanian native handicraft popular internationally. The molas are intricate reverse applique embroideries, sewn by the Kuna Indian tribes for generations. The molas are perhaps Panama's most famous handicraft and a "universal travel ad". The needle work is often crafted in geometric or animal designs, all hand-sewn. They are stitched on their traditional clothing, but tourists often grab a bag or shirt with the handiwork. The San Blas Islands, also known as the Kuna Yala Archipelago, will provide memory insurance for years to come. I have the double pleasure of an up close adventure with the Kuna Indians and the sheer beauty of the tropical Caribbean Islands. The Kunas sell millions of coconuts from the palms dotting their islands, as well as their exotic lush molas. Life is frozen in time, nearly untouched by civilization, with an alluring azure sea, embellished above with a flock of birds. You can feel the soul of this ancestral culture.

NUWEDI (Kuna Phrase for Good)
Clinging tightly to their vibrant indigenous culture, the Kuna fiercely defend all their traditions. This means a gift is available for tourists spending time with these proud, diminutive people as a startling deja-vu step-back-in time. They speak Duleigaiya, and strictly protect tribal bloodlines. Both men and women are highly skilled in paddling dugout cayucos, or ulus, (wooden canoes) between islands. Some anthropologists say their society is matriarchal, with women organizing and controlling the real estate (thatched huts) of the villages, which are commonly owned to promote equality. Kuna women are instantly recognized with bright skirts and blouses decorated with pairs of molas. They decorate their noses with a thin line of genipap or tagua dye. Deep believers in the spirit world, the Kuna think everything in nature possesses a positive guardian and they assiduously practice a kinship with the land and forests. The men collect and sell the coconuts and fish and the women craft the molas. The strikingly beautiful San Blas archipelago wilderness stretches for 140 miles, and the palm-lined island chain is occupied exclusively by 140 communities of Kuna. 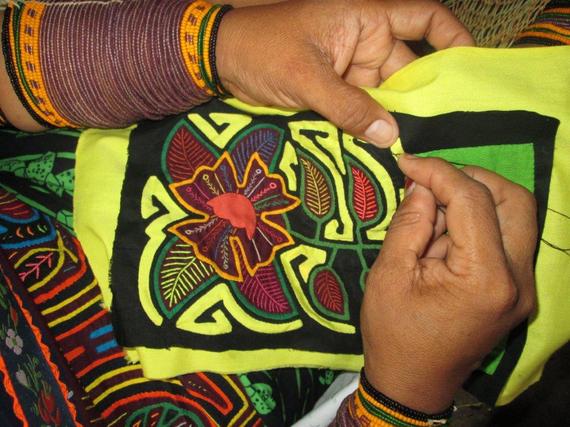 Molas are always made in pairs, as the Kuna believe beings have a double, or an invisible soul, or PURBA. This duality also applies to animals, plants and objects. Creatively, molas come from three sources: copying, from the head (NONOGI), or from a vision in a dream. The traditions are passed from generation to generation, and symmetry is at the heart of nearly all designs, which are metaphors for their philosophy. 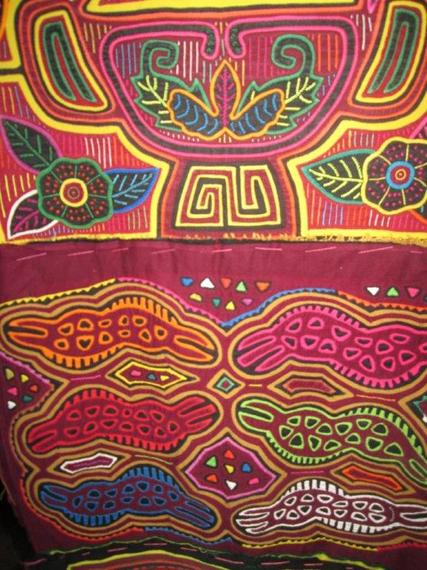 ALSO OFF THE BEATEN PATH
For high-octane ecotourism, Chiriqui and the Boquete Highland are stunning. In Volcan, include a stop at the fascinating Barriles Archeological site. Breathtaking mountains and billowing clouds offer a backdrop of Barriles, which is thought to have been the home to over 1000 people about 600-700AD. Near the border with Costa Rica, the highland attractions of Chiriqui province are home to two national parks, including Panama's highest peak - a 11,300 foot extinct volcano.

Attractive lodgings are nestled with quaint towns in cloud forests in Cerro Punto, Volcan, Bambito and Guadalupe. The area is mainly inhabited by Ngobe Indians who work on strawberry, flower and potato farms. Birding throughout Panama is spectacular, with nearly 1000 species of birds from the Canal to the highlands. In Panama City, don't miss Casco Viejo, the old city.

In Boquete, include a charming tour of the Finca Lerida, coffee farm, and some hiking. The central province is abundant with folklore and culture galore. I cherished the treks to Ron Abuelo for distillation tours and to La Haciendo San Isidro for more on harvesting.

THE BASICS
The stunning simplicity of the culture and islands intrigues and you'll want to plan several snorkel tours, as the azure water and palm-lined pristine beaches are among the finest in the world. With two coasts and over 1,000 islands overall, Panama has a broad selection of opportunities. Watersports, as well as verdant rainforests, provide a gigantic selection of sports and adventures. Accommodations range from rustic jungle eco-lodges to exotic 5-star island spas and retreats. The currency is the US dollar and there are no worries on weather since this Latin American country is hurricane and earthquake-free.

The world-class Panamanian Paradise comes with all the amenities you chose. As I return to "civilization", I long for the Kuna lifestyle and philosophy forever etched in my memory and soul.