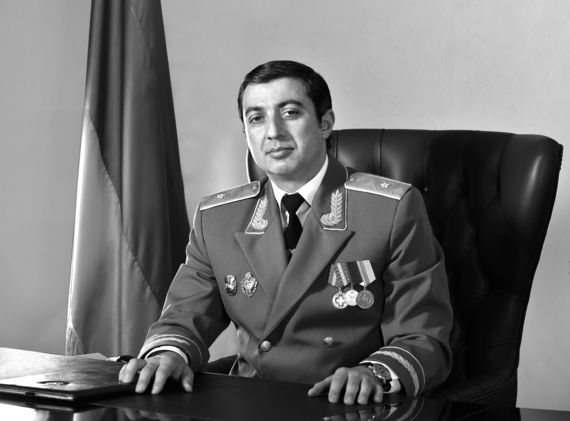 Compared with the tidal waves of fury that the Panama Papers have generated in some countries, the revelations about Armenia have produced barely a ripple.

The disclosures that government officials and business tycoons around the world have used a Panama law firm to hide wealth overseas has led to the resignation of Icelandic Prime Minister Sigmundur David Gunnlaugsson and to political crises for British Prime Minister David Cameron and Ukrainian President Petro Poroshenko. They have also caused political consternation in China by implicating relatives of several top government officials and in Russia by implicating cronies of President Vladimir Putin.

The three Armenians named in the disclosures -- justice-system official Mihran Poghosyan and his uncles Grigor and Mikhail Haroutyunyan -- have used shell companies set up in Panama to obtain Armenian government contracts. That is at the least a conflict of interest for Poghosyan and probably a violation of Armenian law.

Like most officials in the former Soviet Union who are caught with their pants down on corruption, Poghosyan has denied doing anything wrong.

Despite the gravity of the Panama Papers revelations, Poghosyan and his uncles are unlikely to face prosecution in Armenia because they are part of the system, and the system is designed to protect them. They may not even obtain a slap on the wrist for what they've done.

The Panama Papers disclosures could have a broader impact in Armenia, however.

By increasing rank-and-file Armenian anger about corruption, they may finally prompt the country to get serious about graft rather than continuing to sweep it under the rug.

At the moment, the country has two high-profile government organizations that are supposed to root out corruption -- but essentially do nothing.

The Panama Papers are 11.5 million documents that someone leaked to Germany's Suddeutsche Zeitung newspaper a year ago.

The papers were the Panama-based Mossack Fenseco law firm's records of how it set up shell companies to help hundreds of global big shots hide money outside their homelands.

The records include the names of hundreds of government officials, business tycoons and organized-crime figures, plus the names of the shell companies that were established, where they were set up, and other incriminating information.

Aware that it would take years to comb through the millions of Panama Papers on its own, Suddentsche Zeitung gave copies to the Washington-based International Consortium of Investigative Journalists, which shared them with the Organized Crime and Reporting Project.

The organized-crime reporters are journalists based in Eastern Europe, Central Asia, the Caucasus and Central America.

The Armenia revelations are that Poghosyan, who heads the country's Compulsory Enforcement Service, and his uncles own three shell companies that Mossack Fonseca registered in Panama, which is itself a tax haven. The law firm also registers shell companies in many other tax havens.

The Compulsory Enforcement Service ensures that all court judgments are carried out. That makes the chief's position one of the most powerful in the Armenian judiciary.

The Panama Papers show that in 2011 Poghosyan owned two Panama-registered shell companies outright: Sigterm Real Estates and Hopkinten Trading. In addition, he was either a full or part owner of another shell company, Bangio Invest.

The papers don't make clear the amount of his Bangio ownership. They also don't reveal whether he still owns the stakes he had in 2011, or whether he has disposed of some or all of them.

The option that Poghosyan chose for holding the shares is the most difficult to trace, Hetq reported.

He had Mossack Fonseca arrange bearer shares for him. These carry the shell company's but not the owner's name. The issuing company doesn't register the shares or track their ownership changes. So the owner of the shares is whoever has physical possession of them.

Poghosyan obtained the Bangio Invest shares in 2005, the Panama Papers show. That was before he became head of the Compulsory Enforcement Service.

He obtained the Sigterm and Hopkinten shares in 2011, after he had obtained his government position. This would appear to be a violation of an Armenian law that prohibits government officials from owning businesses on the side.

Poghosyan has used his hidden ownership in the shell companies to obtain Armenian-government contracts, according to Hetq's investigation. This would have been impossible had the companies' ownership been known.

Here's an example: Two of the shell companies, Sigtem Real Estates and Hopkinten Trading, are 50/50 owners of Best Realty of Armenia.

Best Realty has received hefty fees for appraising the value of a number of high-profile properties that the Compulsory Enforcement Service became involved in.

The upshot is that the money Best Realty obtained on its Compulsory Enforcement Service work ultimately ended up in the pockets of the man running the service, Poghosyan.

So far the Panama Papers revelations about Poghosyan's shell companies, and the connections that Hetq made between the companies and Armenian government contracts, have failed to generate either ethical or criminal investigations of Poghosyan. But at least one may be coming.

In early April, the national Ethics Committee for High Level Officials refused to look into the Panama Papers disclosures.

It maintained that someone needed to file a complaint with it before it could pursue an investigation.

Armenia's other anti-corruption body, the Anti-Corruption Council, which can look into and recommend criminal proceedings in graft cases, is also unlikely to go after Poghosyan.

Most of those on the council are government officials whom Armenians see as part of the corruption problem. Why would they pursue one of their own?

Although Poghosyan and his uncles are unlikely to face punishment for the Panama Papers disclosures, the revelations are likely to further galvanize Armenians who see corruption as a key reason why many people in the country are in poverty.

The disclosures are also likely to energize Western governments pushing Armenia to give more than lip service to its anti-corruption efforts.

Both the United States and the European Union have pumped money into the woefully ineffective Anti-Corruption Council, hoping it would do something.

If the Panama Papers disclosures can transform Armenia from engaging in the current anti-corruption charade into actually doing something about graft, they will have proved of major importance to the country's future.