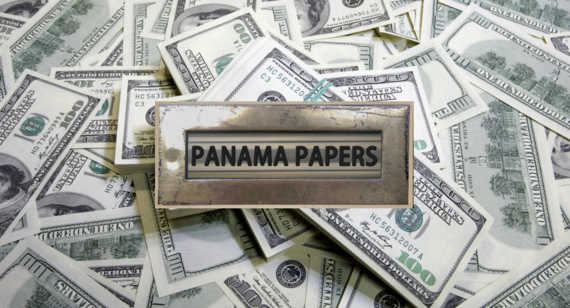 With the presidential primary spotlighting a bipartisan trade revolt, defenders of our status quo trade policies are on the defensive. Their latest claim: the Panama Papers leak shows that the U.S. free trade agreement (FTA) with Panama fixed that nation's infamous tax haven conduct.

An actual review of the data, however, shows that the FTA seems to have incentivized more tax haven activity in Panama, not less.

Of course, the leak only reveals the Mossack Fonseca firm's records, not Panama's overall tax haven activity. However, the documents show the firm increased its use of Panama to shelter its clients' assets at the very time that the trade pact talks were gearing up.

We added the FTA timelines to the Panama Papers chart. This makes clear that the firm began to shift to Panama as a prime tax haven venue in 2003, the year the Bush administration notified Congress it intended to start FTA negotiations. By the time talks were formally launched in 2004, the firm's use of Panama had doubled. When the pact was concluded in 2006, the Panama number had tripled. 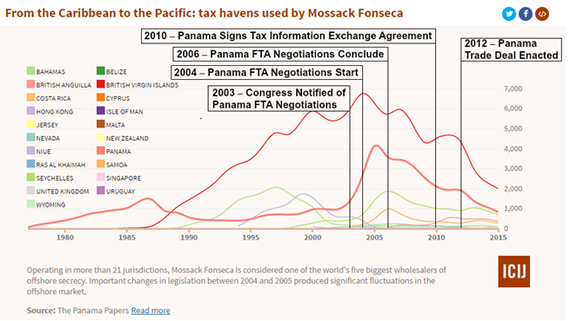 That was precisely what FTA critics predicted. The standard U.S. FTA model forbids limits on inflows or outflows of capital, providing security for those seeking to stash funds offshore. It also provides additional foreign investor protections that have been interpreted to require signatories to compensate an investor if the government changes policies, for instance its secrecy and tax haven laws, on which investors relied in making investments.

The narrative of those trying to defend our current trade agreement model relies on a claim that Panama was pressured into signing a grand tax transparency agreement as a condition for concluding the FTA and this squelched Panama's tax haven practices.

The agreement in question is a 2010 Tax Information Exchange Agreement (TIEA). First, as the chart above shows, Mossack Fonseca's overall tax haven business, including in Panama, began to decline in 2007 - three years before the U.S. tax agreement was signed.

Second, the 2010 tax agreement is a rudimentary protocol that the United States has with almost every country. It only requires Panama to respond to inquiries if a U.S. official already has information on a specific case and knows to ask.

And it contains a loophole that allows Panama to deny requests it considers "contrary to the public policy." That is an interesting concept for a country that earns much of its revenue by providing strict banking secrecy and tax-free status for foreign firms. In contrast, the tax transparency arrangements we have with Canada establish a duty to track and systematically report on U.S. firms' and citizens' financial activities.

More broadly, the chart above shows that Mossack Fonseca's tax haven services declined in all nations starting years before the U.S.-Panama FTA's 2012 enactment. Yet even as the firm ceased operating in many nations, three years into the FTA, in 2015, Panama was only second to the British Virgins Islands as the firm's choice tax haven venue.

Indeed, in 2015, the Organization for Economic Cooperation and Development (OECD) reported that Panama remained one of just 11 nations worldwide that has not passed a first-stage review of its tax transparency measures, due to nonconformity on basic checks against tax evasion. Even the Cayman Islands did not earn that dubious distinction.

Finally, FTA defenders' narrative claims the FTA ended Panama's use of the least transparent "bearer share" corporate form that avoids registering the names of firms' actual owners. The FTA did not ban bearer share corporations, nor was Panama required to eliminate them as a condition for joining the pact. Rather, as the chart below shows, the firm's use of Panamanian bearer share firms boomed during FTA talks. And, despite a "Know Your Client" policy Panama was pressured to enact, now Panama is the firm's only venue for such shell firms as most nations have banned them. 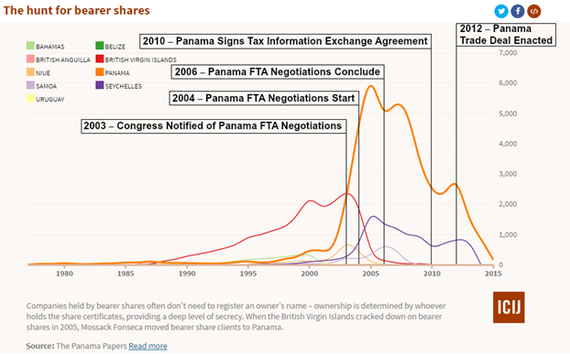 The bottom line: Panama has remained a prominent tax haven despite the overall progress achieved by a global OECD campaign to increase tax transparency.

This reality has broad relevance today.

The Obama administration sold the FTA with claims it would generate economic benefits and force Panama to end its tax haven activities. Instead, U.S.-Panama trade is flat. And Mossack Fonseca's records shows if anything, the FTA's investor protections and the U.S. stamp of approval made Panama a preferred venue to hide assets.

Yet today the administration is once again making equally outlandish promises about the economic and policy reform benefits of its latest trade deal, the massive 12-nation Trans-Pacific Partnership.

Given the wide gap between the promises and realities of the Panama FTA and decades of similar trade pacts, no doubt Americans oppose more of the same trade policies.