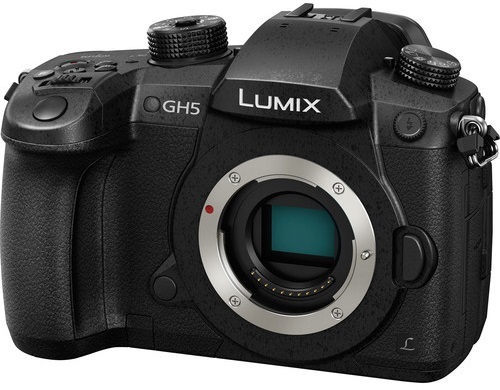 In what has to be the worst kept secret, the Panasonic GH5 has officially been unwrapped confirming everything we already knew.

On the video side of things we can now record 10-bit 4.2.2 up to 30p with Panasonic promising future updates as well for more abilities as well as reduced rolling shutter effects thanks to the faster readout. 4k video can now be recorded up to 60fps with no time limits for video recording and Full HD at up to 180fps. 4k is also shot without any additional crop (!!!!) so you should be able to use the full sensor (2.0x crop) improving low light performance and making it easier to find wide angle lenses. A new feature is the 5-axis in body stabilization system also seen on many Sony cameras as well as the new Panasonic G85 I just reviewed. To further the video capabilities, the body includes a full size HDMI socket with a cable retainer, a better location for the headphone socket, and additional buttons with better placement at the top, and a new joystick for adjusting AF points. On the photo side the new 20MP sensor has lost the AA filters, a larger viewfinder with 3.6M dots, and a new more photo centric battery grip. Dual card slots (UHS II) dominate the right side of the camera allowing hot swappable media for continuous shooting. Unfortunately Panasonic is still using their depth-from-defocus system which in the past has been great for point to point focusing but horrible for continuous tracking, especially in video. There are some software updates aimed at improving this system but even the new Panasonic G85 can't compete with systems like the Sony A6500 and Canon 80D. This is even more interesting given the Olympus OM-D E-M1 II which contains a 121 point dual AF system with both contrast and phase detection points for better tracking.

There are a ton of smaller features mostly geared at videographers bringing all the best professional tools to this less costly camera system. Look for availability in March at $1999 but you better order now as these will likely go fast!