We've seen our fair share of food-preparing robots and machines, but this contraption inspired by the cartoon "Wallace & Gromit" takes the cake... the pancake. 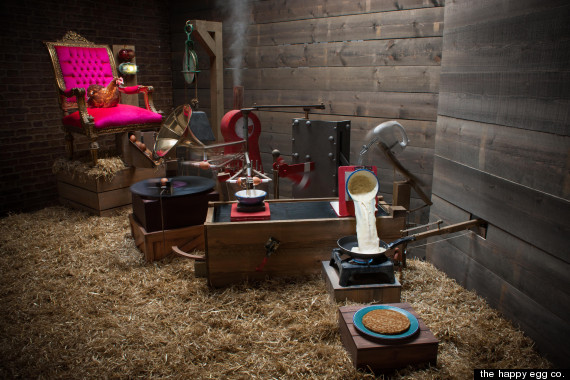 Bad puns aside, the "Pancake-omatic" was developed for free range chicken company the happy egg co. and will go on display at the Design Museum in London later this month.

We doubt the machine will ever be sold commercially, but it really does appear to make pancakes. It has the look of a Rube Goldberg machine, which the Oxford English dictionary defines as "ingeniously or unnecessarily complicated in design or construction."

Here's how it works: A hen lays an egg, which rolls down a ramp and pushes a wooden spoon that winds up a gramophone. The eggs drops into a holder on the spinning record, which swings around to a bowl filled with the remaining pancake ingredients. The egg is cracked, mixed and the resulting mixture is released in a hot pan, where it cooks for 30 seconds before being flipped onto a plate.

According to U.K. newspaper Metro, design engineer Dermont Doyle found the machine a challenge to build:

"It's no mean feat to create a machine that will break an egg let alone flip a pancake so this project has been a really exciting challenge for the team. ... We hope we've cracked it and our machine encourages others to make their very own egg-inspired inventions."

The machine required a team of four design engineers from Helix design production, who spent more than 200 hours constructing it and another 100 to carry out tests.

Food Robots Around The World
More:
pancakesVideorube goldbergWallace and GromitFood
Newsletter Sign Up
An essential daily guide to achieving the good life
Subscribe to our lifestyle email.
Successfully Subscribed!
Realness delivered to your inbox