Everyone knows pandas love bamboo: they can eat more than 80 pounds of it every day. But bamboo leaves and shoots don't contain very much nutritional value, and researchers believe pandas' gut microbes and intestinal structures aren't even well-suited to digesting the plant.

So how do these furry bamboo gluttons get by?

Pandas may survive because, on average, they expend much less energy than other land mammals their size, revealed a study published Thursday in the journal Science.

The research team measured the animals’ metabolic rate using the doubly labeled water method, which is also used on humans.

How do panda bears conserve so much energy? Along with certain physical adaptations, they don't move too much. The researchers observed the captive pandas for 100-minute intervals and recorded their activities, while the wild pandas' activities were measured using GPS collars. The pandas in the study devoted less than half of their time to physical activities.

Pandas have smaller brains, livers and kidneys than other bears, requiring less energy to function. They also have lower levels of two thyroid hormones, meaning they have a slower metabolism than similarly-sized mammals.

But they're not alone in their lazy ways. "Although the metabolic rates of the giant panda are exceptionally low, we do not suggest that they are entirely separate from other eutherian mammals" like three-toed sloths and red pandas, the researchers wrote.

You take it easy, Mr. Panda. Your life may depend on it. 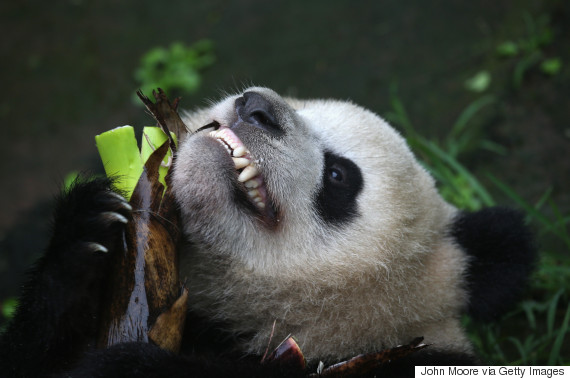 Pandas Get By On Bamboo Because They Don't Move Too Much, Scientists Find
Panda Overload!