First pangolins were being hunted toward extinction, and now the "scaly anteaters" are being smuggled, also leading to their demise.

Pangolins are the most illegally trafficked mammals in Asia, according to the Associated Press. It's been against the law to hunt them since 2002, but the ban is now leading to more and more incidents of smuggling -- and punishment for doing so is mild, with no offenders having faced jail time.

Some Chinese citizens have been eating pangolin meat for years, and now since the population has diminished in the country, the animals are being smuggled in from parts of Cambodia, Vietnam and Lao PDR, where the mammal's population has hence also decreased, according to National Geographic.

Officials recently discovered 20 boxes full of pangolins at an airport in Jarkarta, Indonesia. The packages were thought to have contained fresh fish, the Associated Press reports.

Their scales are thought to have medicinal healing powers, and some are bringing the animals into China because they're worth big bucks. AP estimates that ten tons of meat are worth about $269,000.

The nocturnal animals tend to keep to themselves, spending most of their time in trees. They move slowly, have no teeth, and their only defense mechanism is to curl up into a ball.

A Sindh Wildlife Department official from the Pakistan province, told The News International that pangolins "were one of the most timid mammals that ordinarily shy away from human contact."

Pangolins are hunted by animals such as hyenas and leopards, but today, their biggest threat is humans, the San Diego Zoo states.

The animals are a protected species by the Convention on International Trade in Endangered Species of Wild Fauna and Flora (CITES), an organization which strives to ensure that "international trade in specimens of wild animals and plants does not threaten their survival."

The animals used to be available for purchase for roughly $4 each, but now the scales are worth about $276, The Sun reports.

PHOTOS: (WARNING -- Some may find these images disturbing) 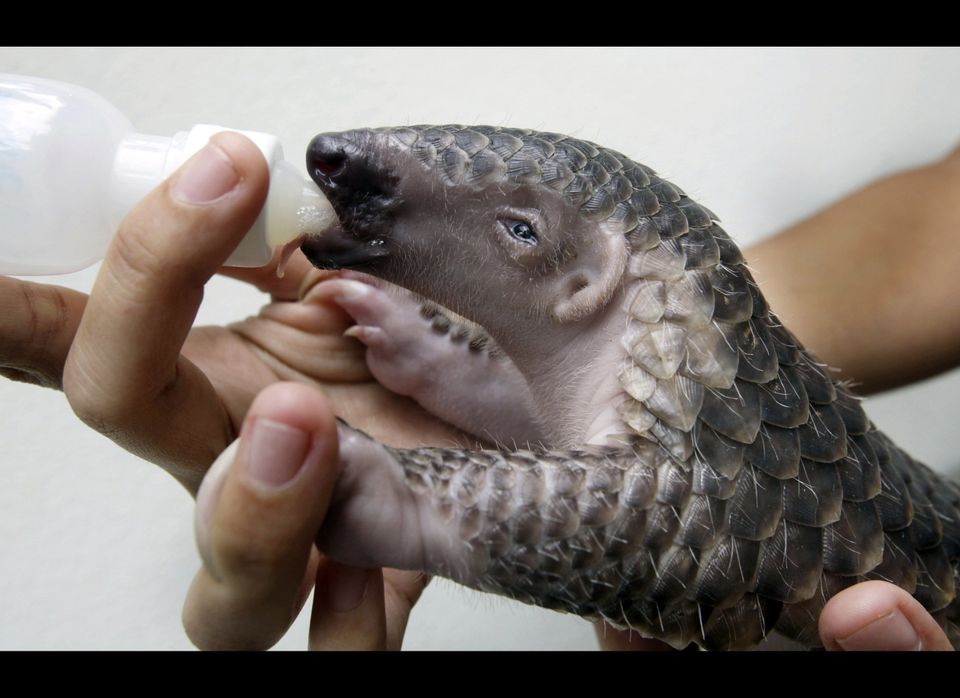 1 / 8
Asia Endangered Anteater
A Thai zoo official feeds a pangolin with milk at the Dusit zoo in Bangkok, Thailand in June 2009. The pangolin trade, banned in 2002 by CITES, the international convention on endangered species, resembles a pyramid. At the base are poor rural hunters, including workers on Indonesia's vast palm oil plantations. They use dogs or smoke to flush the pangolins out or shake the solitary, nocturnal animals from trees in often protected forests. (AP Photo/Sakchai Lalit, File)
AP