Indonesia's Papermoon Puppet Theater is taking an art form we often associate with children's stories and turning it into a vehicle for addressing the country's dark history. The company, started by visual artists Maria Tri Sulistyani and her husband Iwan Effendi, uses whimsical puppets and multimedia performances to recreate personal accounts of the mass jailings and executions that took place in Indonesia in 1965. They are harrowing stories, meant to shed light on the emotion and complexity of a time period often glossed over in contemporary history.

Papermoon's performances reveal intimate moments of Indonesia's past, but the company maintains that a discussion of politically driven atrocities is something accessible to international audiences. And the U.S. State Department agreed, recruiting Papermoon for its Center Stage program that will be touring throughout the country this year. Sulistyani and Effendi will be showcasing their work, “Mwathirika," alongside ensembles from Haiti and Pakistan, sharing their brand of art as an initiative of cultural diplomacy.

We asked Maria Tri Sulistyani about her beginnings in the world of puppetry, the heavy themes she's chosen to present and how she thinks art can interact with diplomacy in an email interview: 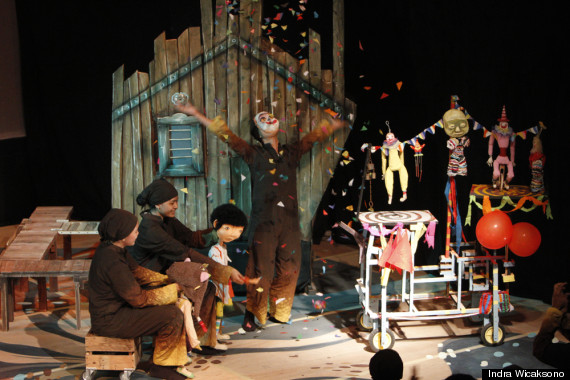 Can you tell us a little about traditional shadow puppetry in Indonesia? How does your style of puppetry compare?

Wayang kulit (Shadow Puppetry) has been an important art form – especially on Bali and Java – for almost 1,000 years. Its stories of good and evil, of love and death and transformation are most often taken from the Hindu epics Ramayana and Mahabharata. A single dhalang (master puppeteer) manipulates all of the many two dimensional leather puppets from behind a screen (to cast shadows). He also voices all of the characters. It is a virtuoso performance! While reaching back in history to tell his tales, the master puppeteer always makes reference to current happenings. Traditional puppet theater has played an important role in communicating values to communities.

There is also another kind of puppetry – Teater Boneka – that is generally just for children and it is a much less formal. Inspiration for the stories and the puppets come from lots of different influences – even Sesame Street.

The interesting part is that people in Indonesia had never connected these two types of puppetry before. Papermoon makes that link, and this is something new. Our pieces are performed on stages, like a theater play. Several puppeteers are on stage manipulating the puppets. Mwathirika, the piece we are presenting on tour, is really for adults, not kids and is a story told without words, without speaking. But we are telling stories about values, too -- about moral choices and conflicts and relating to everyday life. Our stories are really personal and focus on individuals. From there we can see the bigger issues. Though Papermoon is not really creating a performance in the traditional form, we too want to share and talk about the values and ideals and choices of Indonesian people's life.

Your earlier work, "Noda Lelaki di Dada Mona (A Stain on Mona's Chest)," used puppets to convey a politically and sexually charged story. What was the reaction in Indonesia to such a performance?

It was very interesting because Papermoon had created performances for children since 2006, and "Noda Lelaki di Dada Mona" was the very first time we created a piece for an adult audience. That was also the first time we sold tickets to a performance, 300 seats, and it sold out!

People were shocked with what they saw. Not just only about the theme, but also by the kind of puppets we performed with, how realistic they were, and how we combined puppets with the actors who spoke as individuals, which had never been seen by people in Yogyakarta. Together with our audience, we started to realize that puppet theater could reach many people, including adults. Instead of having one puppeter verbalize all the voices, we decided each puppeter will speak for his own puppet. I would say that "Noda Lelaki di Dada Mona" was a kick start for Papermoon to do more performances, based on social themes, to communicate with many different types of audience.

In "Mwathirika" you have again focused on more serious accounts, this time of imprisonment and violence. Do you think the use of puppets makes it easier to express these heavy themes? Or easier to digest on the part of the audience?

Yes. For us, puppets are the perfect medium to bring an unexpected moments or difficult subjects to the audience. Puppets always have the image of cuteness, happiness, sometimes scary, but mostly FUN. So when people come to the theater, with a certain expectation of puppetry, they can be surprised, because what they see is totally different from what they thought.

Many people feel like the story of 1965 is already over, it's expired, helpless, over-researched, or it's never been heard. By seeing a poster of two little boys with a red balloon, people will think about something sweet. They don't have fear to come, they feel relaxed, they are open. It’s perfect.

You spoke to a number of people - parents, grandparents, neighbors - who provided their stories for "Mwathirika." Could you tell us about one story in particular that sheds light on the historical situation in Indonesia?

We asked them about what they felt at those moments in their lives. There was a lot of data, books about the 1965 tragedy, but very few could give insight into their feelings. And by interviewing those people, we could see their eyes, and what they really felt in their hearts – uncover their personal stories.

One of our company member's uncle, told a story about how he, a 12 year old boy, had to take care of his little brothers and sisters, after their father was taken away by government officials, and didn't come back for 13 years. He had to catch frogs in the rice fields, for his family to eat. And how the family grew in the middle of these chaotic moments, with children with no parents, and no one in the village dared to help, because if they helped they might be caught by the army too. In Mwathirika, we are not pointing fingers; we are not saying that one person is right and one person is wrong. But we tell a story about the impact of political turmoil on those who lived through those terrible times and the huge effect it has had on the next generation.

Your project has now become a tool for cultural diplomacy, helping to foster greater understanding in the US in particular. How do you view art in the greater scheme of international cooperation? Do you think that art has the potential to bring people together in a way that other diplomatic tools can not?

Yes. What people know about other countries or cultures, is mostly from the media. And it's usually about all problems of economy, technology, war, conflict, and how to deal with that on a big scale. Of course people need to do big things, but sometimes people forgot how important it is to build a personal solution for the problems. And for us, Art is a personal thing. It’s about how we can reach out one person to another. When people meet, exchange their cultures, see another art from those who live in another country, then they see a different thing, they learn to respect each other. If people can share, talk more about their culture, the respect will go deeper, and hopefully an understanding of each other will be built there. Like we said, Art gets personal. This is where those big actions made by government might not reach.

Last question: Indonesia has become one of the region's largest markets for contemporary art. How has the art scene changed in Indonesia since the 1960s?

When Indonesia became an independent country in 1945, art was seen as a big strength and unifying force for the country. The government put a lot of attention on the development of the arts. Sometimes, art was also used as a political tool.

In 1965, the art scene was changed by the political turmoil, lots of critical artists were jailed, silenced, disappeared in the violent political battles between the government and the Army. There were three years of chaos. When General Suharto took power in 1968, the government centralized the arts. Artists that had not been caught, and were still active, could develop their careers, but always had to support – promote --the government. And though things loosened up little by little over time, that was really the case up until the 1990s. The government was still very oppressive, and they didn't want people to say bad things about them.

In 1998 when there were riots in the streets all over the country because of the falling economy, Suharto resigned and things began to change again – to open up and become less centralized. Since then, the art scene is changing (very quickly) again, because of the openness of information through internet, etc.

Papermoon will begin their US tour on September 8th, 2012 at The Kennedy Center Millenium Stage. For more dates, check out their schedule here.