In January, the Marsh Youth Theatre in San Francisco premiered a new musical entitled In and Out of Shadows which focused on the lives of Bay area families that included documented and undocumented immigrants. While Congress tackles immigration reform, many doubt their ability to produce a genuine path to citizenship.

I applaud today's Supreme Court decision in United States v. Windsor holding that the Defense of Marriage Act (DOMA) is unconstitutional. This discriminatory law denied thousands of legally married same-sex couples many important federal benefits, including immigration benefits. I am pleased the Court agreed with the Administration's position that DOMA's restrictions violate the Constitution. Working with our federal partners, including the Department of Justice, we will implement today's decision so that all married couples will be treated equally and fairly in the administration of our immigration laws.

Whether undocumented immigrants crawl through a tunnel linking Mexico with the United States or pay a Chinese "snakehead" to help them stow away aboard a container ship bound for America, every day of their new life begins with the fear that they will be approached by someone who says "Papers, please!"

In a new short entitled To The Bone, director Erin Li and her co-writer, Silka Luisa, look at a family of undocumented migrant workers out in the fields. Jaime Alvarez portrays an undocumented father who is picking vegetables as his two young children attempt to help.

When eight-year-old Marcos (Carlos C. Torres) cuts his hand, his ten-year-old sister Valencia (Naomie Feliu) helps him to bandage the wound. But when a car pulls up, word quickly spreads to move to the back of the field. A government inspector (Maria-Elena Laas) has arrived to check on the workers' conditions and see if they're receiving enough water during the day. 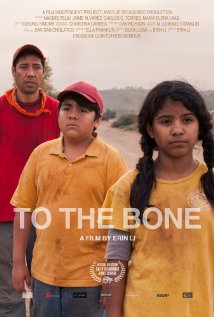 Poster art for To The Bone

The father quickly reminds his children not to answer any questions and stresses that if anyone asks their age, they should say they are 12 years old. But the inspector turns out to be a beautiful young woman who starts talking about the games her son likes to play on his XBox. After she's spent a few minutes chatting up the children in order to put them at ease, she asks how old they are.

When Valencia defies her father, and confesses their real ages, the jig is up. Only as they as they are walking home (after her father has lost his job) does Valencia begin to understand the unfortunate chain of events triggered by her honesty. At that point, tears begin to flow. If you click here, you can watch a free download of Li's poignant short which says more in its moments of silence than it does with dialogue.

Earlier this year, the American Conservatory Theatre presented the world premiere of Stuck Elevator, a new piece of musical theatre based on an incident that took place on April 1, 2005 in The Bronx when, after delivering some Chinese take-out food to an apartment in the 38-story Tracey Towers, 35-year-old Ming Kuang Chen was trapped in an elevator for 81 hours without food or water. It's a fascinating piece of performance art.

An undocumented immigrant from China's Fujian Province, Chen was struggling to pay off the $60,000 debt he still owed to the "snakehead" who had arranged his passage to America. Having sold his cell phone to another worker, he had no way of communicating with the outside world and was terrified that, if rescued by police, he could easily face deportation. 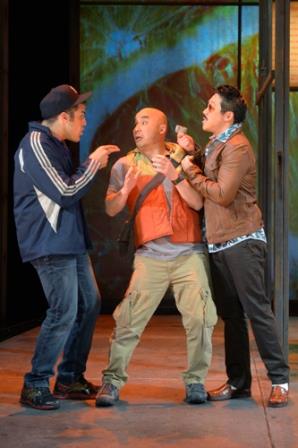 The creative team behind Stuck Elevator uses Gaung's hellish experience while trapped in an elevator as a springboard for the kind of artistic license which encompasses a wide variety of musical styles while embracing dream sequences, hallucinatory realism and abject paranoia as tools for bringing peripheral characters from Guang's life onto the stage. 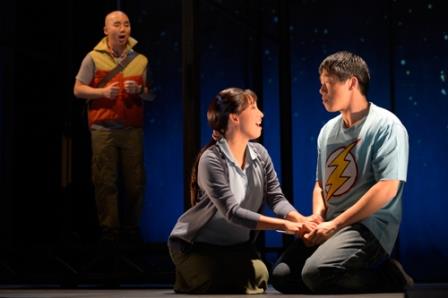 During the 30-year period from 1970 to 2000, many attempts were made to demolish the wall between opera and musical theatre. In trying to describe why so few operas were being written by composers of rock 'n' roll, Ben Krywosz, OPERA America's first project director for the Opera into the Eighties and Beyond program, noted that:

"Curiously enough, the operatic establishment does not speak the language that most people in America do. As a result, there's something which is not quite connecting to people on a core level. And that something has a lot to do with having a different cultural point of view."

According to its composer, Byron Au Yong:

Stuck Elevator (which is about being trapped) is part of a trilogy about Asian men who have become the subjects of American media storms.
The second part of the trilogy, Trigger, is about what Americans fear. Inspired by the Virginia Tech shooter (Seung-Hui Cho) who wrote poetry and theatre as an undergraduate student but ended up shooting 32 people and killing himself, Trigger aims to discuss America's approach to mental health and violence. The work is planned as an oratorio for 32 singers whose voices "will soar in an Artaudian fantasia about belonging and isolation."
The third part of the trilogy, Fallout, will be about the fear of being gay. Its protagonist will be LGBT activist Dan Choi (who chained himself to the White House fence to protest the military's "Don't Ask, Don't Tell" policy).

In many ways, Stuck Elevator is the politically relevant, contemporary multimedia chamber opera that Krywosz and his colleagues kept aiming for but often failed to achieve. Mixing hip hop with operatic voices and a variety of musical styles (accompanied by violin, cello and percussion), it is a theatre piece whose musical voice is very much its own. As Au Yong explains:

I live in Seattle, which is a 21st-century city, a high-tech city. Often, when I meet new people and I say 'composer,' they think I write for video games and the tech industry. When I was studying, there actually wasn't necessarily a connection between my music and my family. And yet, whatever I wrote, no matter what it was inspired by, it would be considered Chinese or Asian because the faculty would look at me and expect that. I don't want to sound like a victim, but as an Asian American in this country, I'm always a second-class citizen. Whatever music I am writing, whatever I am inspired by, it will be considered to have something Asian as part of it when people actually see who I am.

At one time, Au Yong (who calls himself "a composer of songs of dislocation") and librettist Aaron Jafferis described Stuck Elevator as "a comic-rap-scrap-metal opera." The young Asian-American composer is quick to clarify that:

Aaron is more politically active than I am. However, being an artist, I have a lot of agency. I do have some power and I am going to use that power to promote more equity for other people and for future generations. One of the most difficult things about Stuck Elevator is realizing that the people who are depicted onstage may not actually be in the audience. Hopefully, their children will be, though. And so, whether I"m an activist or not, I think I have to acknowledge that I live in this country and that there are certain rules by which America operates. 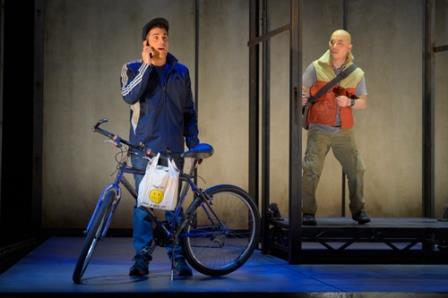 ACT's artistic director, Carey Perloff, was first exposed to Stuck Elevator when she walked into a rehearsal room at the 2010 Sundance Institute Theatre Lab. She quickly embraced the project (which would not only appeal to the Bay area's large Chinese community but could help open up some valuable new sources of funding for the company). As the composer notes: 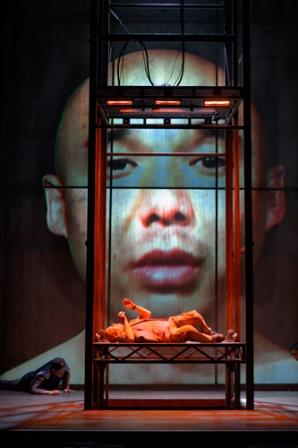 Thanks to Daniel Ostling's unit set, Kate Freer's projection designs and Mikhail Fiksel's excellent sound design, the production had a remarkable sense of style. Much of this was due to Chay Yew's sensitive direction and Stephen Buescher's choreography.

Julius Ahn gave a magnificent performance as Guang, with strong support coming from Joel Perez, Raymond J. Lee, Joseph Anthony Foronda and Marie-France Arcilla in a wide variety of roles. Under Dolores Duran-Cefalu's musical direction, the sounds of Au Yong's three-piece ensemble were piped in from a room backstage. 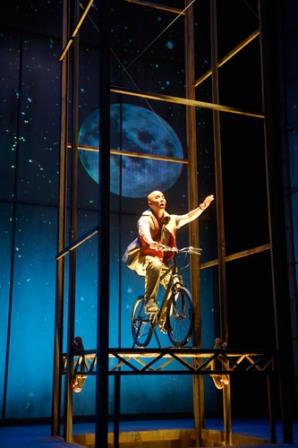 Stuck Elevator could be an exciting addition to New York City Opera's repertoire as well as a perfect attraction for audiences at the Brooklyn Academy of Music, Kennedy Center and venues like the Edinburgh Festival. If some kind of tour or cultural exchange can be worked out, it would be fascinating to see how this contemporary chamber opera fares with audiences in cities like Beijing, Taipei, Hong Kong and Shanghai (San Francisco's sister city). For opera and musical theatre enthusiasts, this was a rare artistic triumph.