It being summer, I've attended quite a few parades. The last two were the Coney Island Mermaid Parade and the NYC Gay Pride Parade. One would think that most people attending these two parades in particular would be pretty laid back, but not necessarily so. No matter what the occasion or how cool the crowd, parades bring out pushiness.

Here are some tips you can follow to survive parade season, as well as be a pleasant parade-going neighbor. 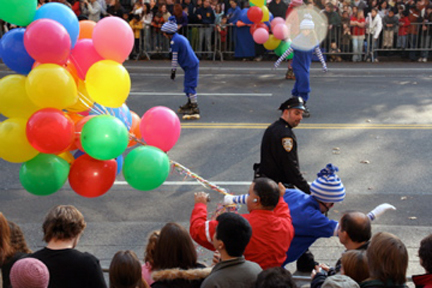 Establish your space: Get there early. Don't expect to push your way in after the parade starts. (Get real. This is the best way to incite a riot.) Stand in the gutter or on stumps or beams to created a tiered standing area, being conscious of those who may be behind you. Put bags and backpacks between your legs. If you can, stand behind a child (this is the best bet for me since I'm short). And please, please be a nice neighbor and wear deodorant. (Not wearing deodorant will surely establish your space in a rather distasteful manner.)

Make nice with your neighbors: Chat with them. If you are sitting down when they arrive and then stand, reassure them that they'll still be able to see: "It's OK, I'm short." Make them laugh: "Isn't that MJ drag queen beautiful?!," or "Crazy ass chaps on that guy, huh?" The point is to establish the fact that you're just like them; you want to see and enjoy the parade. You're not a human stump on a mission to block their view.

Maintain your space: Don't leave. Ever. (Where did you put those adult diapers from your grandmother?) Bring snacks and water, a hat, a poncho, and sunscreen with you so you don't have to venture out. Don't let anyone inch into your territory or let them in front of you if just for a moment (with the exception of people shorter than you). Your view will never be the same.

How to handle elbowers/rubbers: "I'm sorry, I didn't plan on sharing my sunscreen with you in such an intimate manner" or "I have a skin condition" might work. Honestly, I don't have very good advice for this situation. It's a toughie. Maybe asking nicely?

Now get out there and parade.

US Presidential Election 2020
Breaking news, analysis and the latest polls on the presidential race from HuffPost’s politics team
See More
More:
mannersparadehealthy livingcrowdspoliteness
Newsletter Sign Up
The essential guide to taking care of your mind and body
Subscribe to HuffPost’s wellness email
Successfully Subscribed!
Wellness delivered to your inbox