Blindfolding the critic: TEDXChelsea's "The true value of art is rarely what someone will pay for it" catapulted new stars into the art world filament.

For nearly two decades years now, TED has been perfecting its formula as a global media vehicle transforming innovators in technology, entertainment and design into cyberspace rock stars.

Art, however, needs apt timing, as well as the appropriate vehicle, to fulfill its essential mission: evolving the collective consciousness.

June 1, 2012 will be notable for the birth of TEDX Chelsea Conference. "The true value of art is rarely what someone will pay for it" turned the illogical "winner takes all" art market on its head by delivering a time honed TED "innovator as rock star" media formula into the concept-driven New York art world. 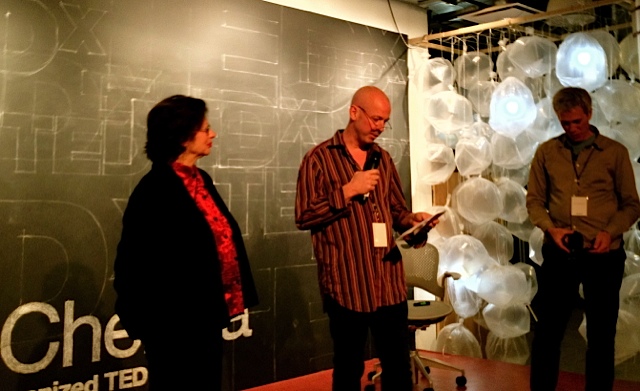 The six hour event did what no other entity has been able to do: cross Chelsea into the paradigm leap in one fell swoop, a convergence of inspired curation and cosmic timing. 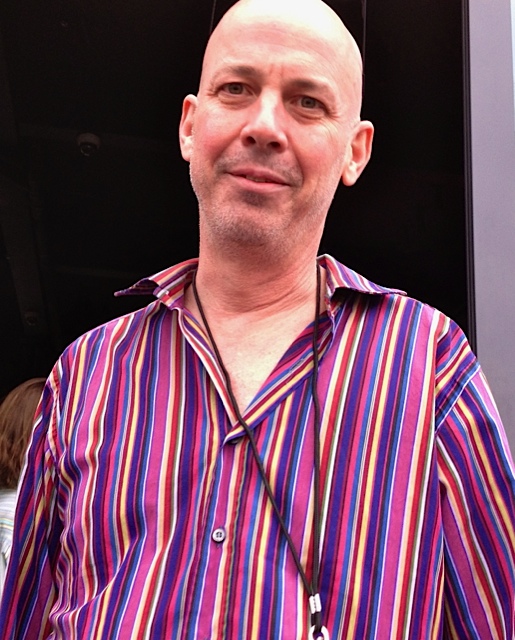 Reven Wurman, here at the after party, said he curated the event to emphasize personal narrative.

That it did so through Joseph Campbell's "follow your bliss" personal myth-making
forged by transcendent personal narrative made the event all the more significant for 2012, a time when the mythology surrounding the End Date of the Mayan calendar is converging with a global crisis of unprecedented proportion.

It is worth noting that there were no dedicated art critics in the speaker line-up. Yet, my participation as a paid audience member capped a personal milestone. TEDXChelsea brought me full circle back to my millennial dual focus: tracking innovations in web technology for Internet.com while reviewing breakthroughs in art for a daily newspaper. Balancing the cutting edge of art and technology in 2000, I came up with a list of characteristics identifying 21st-century art forms which I later wrote into manifesto: collaborative, holistic, interactivity with the environment, dynamic presence; transcendence and embracing uncertainty.

TEDXChelsea had them all, serving as a model for a 21st-century multi-media collaborative art form that marries heaven and earth through propelling a local live audience into cyberspace.

Reflecting the essential nature of art world exclusivity even as it tore down the old paradigm hierarchical art world structures serving as a barrier to the creation of new art stars defying the marketplace, TEDXChelsea was an invite only event, where the audience had to apply to participate, and then pay $75 for the privilege of attending.

The day started off with an inspired blending of art and mythology through the personal uncertainty narratives of former museum director David A. Ross and counterculture guide Daniel Pinchbeck, author of 2012: The Return of Quetzalcoatl. Melding medium to the message came into play with the slick presentation of, naturally, the most media-ready participant: 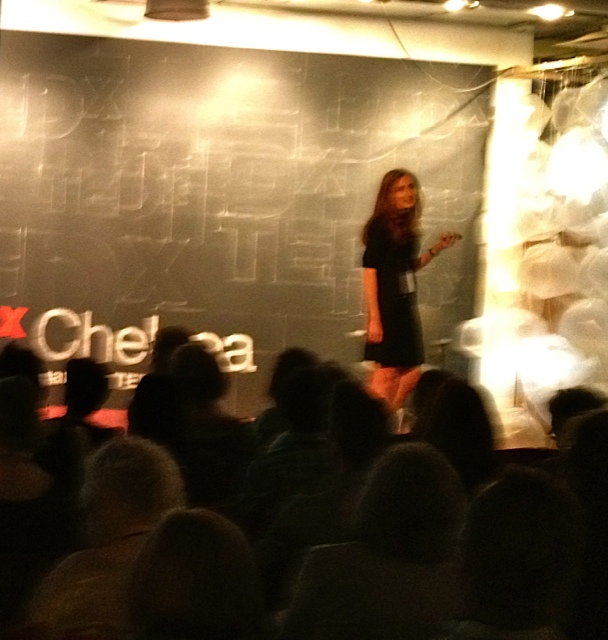 After artist/author Alexis Clements laid the groundwork for placing personal mythology in a contemporary art narrative to close Session I, individual pathways were presented. Session II consisted of the full range of art world players: dealers (Jim Kempner's hilarious videos parodying the New York art world), advisors (Candace Worth's anecdotes about the illogic of pricing strategies) back end operators (Aditya Julka establishing value in those who support the artist finding their way to the collective consciousness) and artists (Jennifer Dalton's "I think the culture is confused to the point of insanity about the value of art" personalized public investigation into worth and Eric Doeringer's mind-bending tale of appropriation ad infinitum).

The vibrational shift took hold in the third and final afternoon session with pioneering crossovers into the new paradigm offering insights into their personal evolution of consciousness:

Marshall Arisman, Founder and Chairman of the MFA Illustration as Visual Essay program at SVA.. 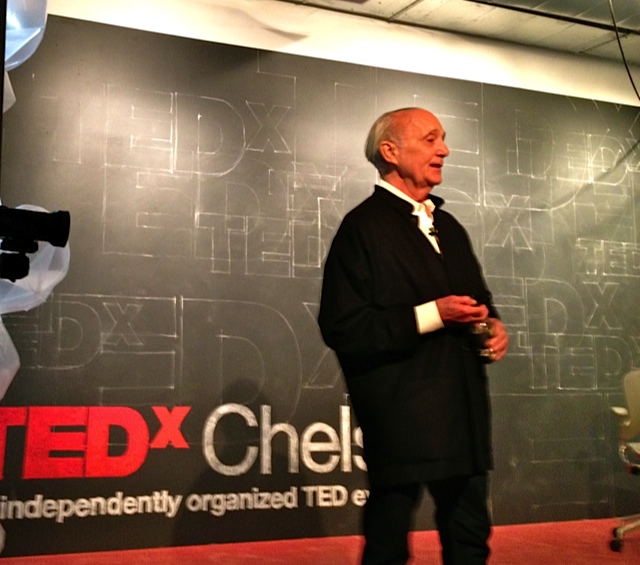 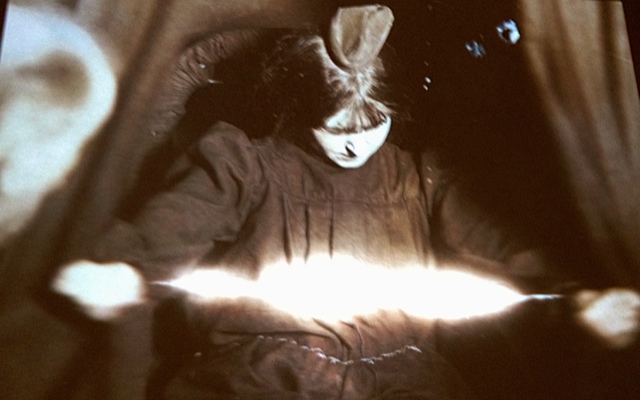 ...wove a fascinating narrative of spiritualist ancestry into his obsession with painting deer as ancient totems of the lost human connection to nature... 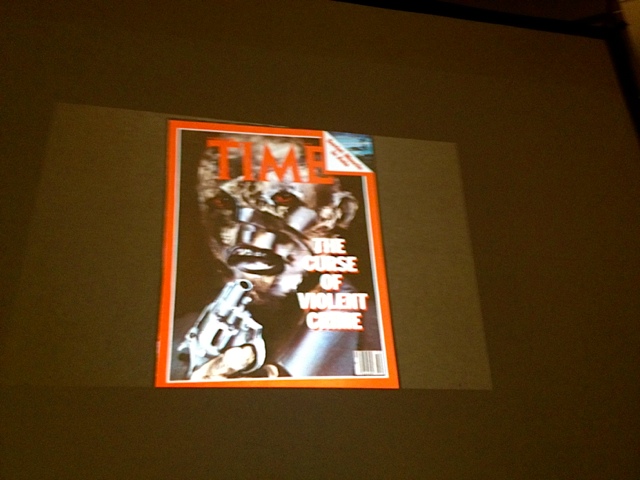 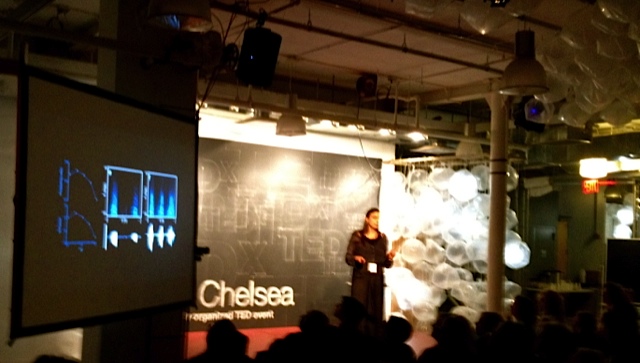 ...by way of a vibrational diagram of the caterpillar morphing into butterfly as she related her breakthrough discovery: change doesn't come in increments but great leaps forward.

Vesna's personal narrative related her alchemical blending of art, science and cosmology stemmed from an investigation into the sacred geometry of Buckminster Fuller... 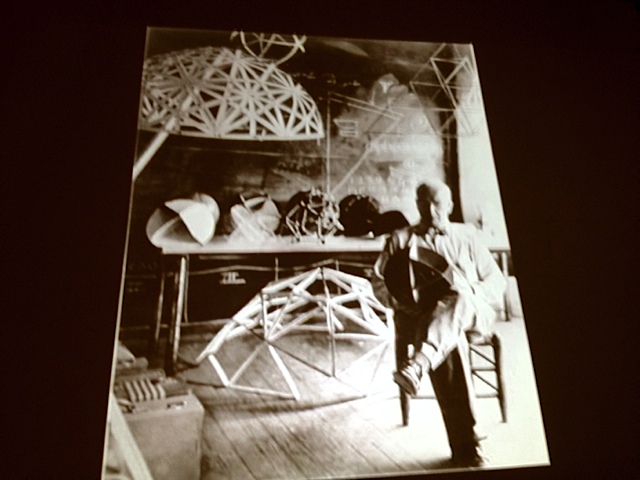 Buckminster Fuller with his hexagons, symbols of the 21st century icon, the hieros games... 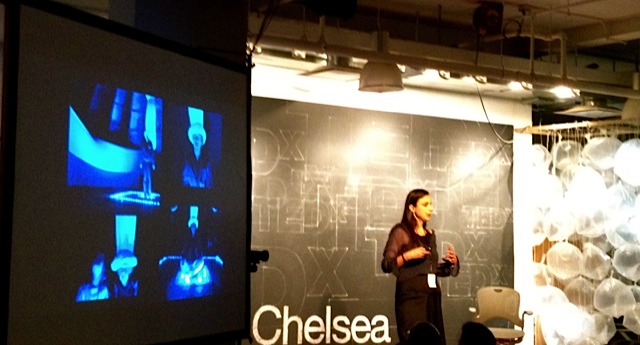 ... when she asked me to initiate the project on Governor's Island last summer.

Martha Buskirk author of Creative Enterprise: Contemporary Art Between Museum and Marketplace placed the TED formula into a sharp critical perspective when relating a visual diary of wanting for Robert Smithsom's Floating Island to appear so she could establish its critical importance via personal experience. She went on to interpret the strange phenomenon of... 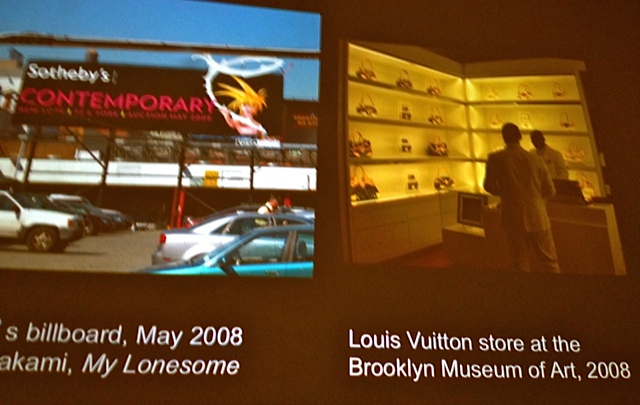 Murakami's store INSIDE his retrospective exhibition at the Brooklyn Museum, which visually summed up the theme of the day.

Yet, community activist Laura Braslow, co-founder of Arts in Bushwick and former co-organizer of Bushwick Open Studios brought the message down to earth by revealing, again through personal narrative... 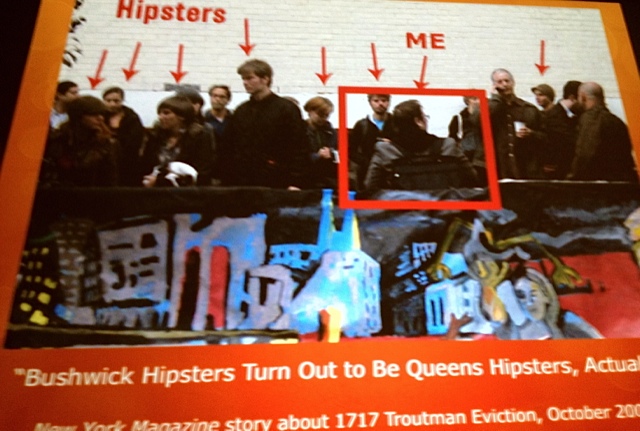 ..the potential for destabilizing mainstream media's art star making apparatus by way of collaborations between creative artists and the communities they threatened into extinction through their "hipster" presence.

Braslow's personal journey surpassed that of the artists in revealing the allure of being part of a supportive art community in a time of great uncertainty. Her heartfelt presentation laid the foundation for an expected finale that slammed the new paradigm message home via the time honed TED medium. 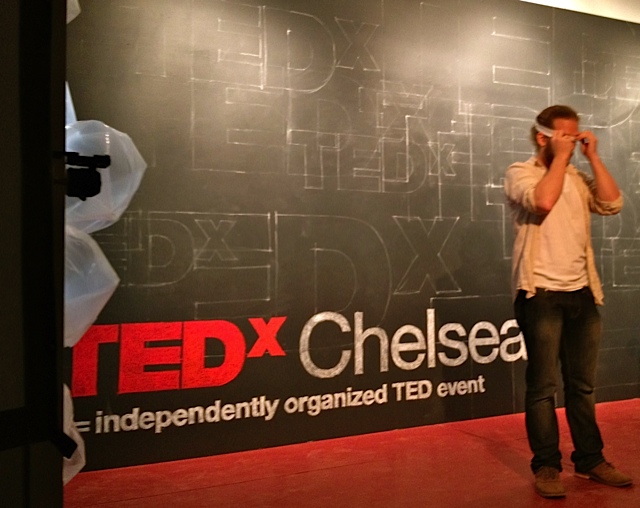 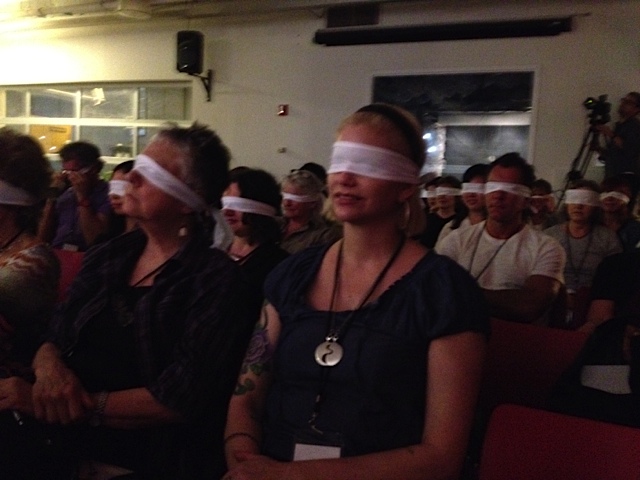 ...as the premeditated portion of an otherwise ad hoc performance sincerely demonstrating his feelings about not being paid to speak at a money making event.

Skewering the elephant in the room by utilizing the blindfold to strip down all barriers between stage and audience, the performer transcended his personal narrative by demonstrating the essentiality of the collective experience of the paradigm shift taking place at TEDX Chelsea: we are all entering the unknown together as a human species.

Lisa Streitfeld is a new media artist and cultural critic who has written about the international avant-garde from New York for the past 15 years. She paid $75 to be an audience participant at the first TEDX Chelsea and is not getting paid for writing about it. Yet, the value of what she received from the opportunity to participate in the making of a new paradigm art form was priceless.

All photos by Lisa Paul Streitfeld.

CORRECTION: In an earlier version of this article, Alexis Clements' name was misspelled. We apologize for the error.