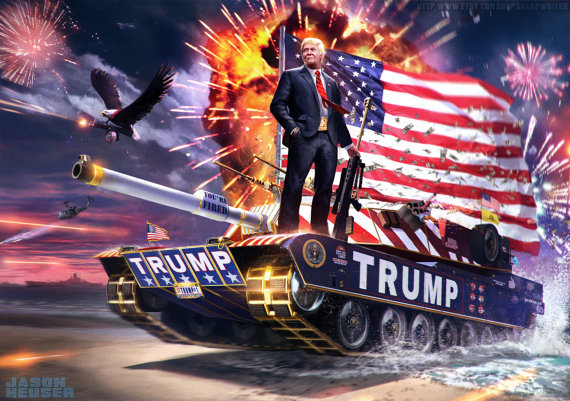 Although the scientific community has had an uneasy relationship with President Trump, a newly-formed group of physicists is seeking to legitimize so-called "alternative facts" utilized by the President and his administration. The group, whose name "Un-Cucked Physicists for Trump" appears to throw shade on more politically moderate peers by labelling them "liberal cucks", has started a petition claiming "'Alternative facts' are completely factual - just not in the reality we happen to physically inhabit." Further, the petition argues: "We demand 'universe equality'. And we demand equality of facts between these universes." Under a particular interpretation of quantum mechanics subscribed to by some physicists, objective reality is comprised of numerous parallel (or alternative) universes within a multiverse in which "all alternative histories and futures are objectively real."

Beyond this argument for fact equivalency between universes, "Un-Cucked Physicists for Trump" demands that the "fake news media and their liberal snowflake accomplices" practice a more ethical form of political discourse that does not "prioritiz[e] facts from our own universe over facts from parallel universes." By practicing a form of journalism that privileges the legitimacy of facts from our own universe, the media "creates sensationalistic articles that claim the Trump administration is selling lies" and also "promotes politically correct narratives that limit facts the Trump administration can effectively utilize to support its agenda."

Unfortunately, fact equivalency between universes, the group contends, will lead to some "inconvenient truths" for liberals:

"Among other inconvenient truths for liberal snowflakes, there is no question that Donald Trump has had the biggest most bad-ass inauguration in US history, that America's murder rate has been at a 45 year high, and that the Bowling Green Massacre was one of the worst tragedies in American history."

Moreover, these "inconvenient truths" not only exist in other universes, but may also exist in ours as well: "Initial findings from our research group indicate that within our own universe, in addition to matter and dark matter, there may also be 'alternative matter', which operates according to rigid rules of alternative facts and alternative laws. Like dark matter, alternative matter is not clearly visible." The astounding implication of this research if proven correct would be that events, such as dozens of terror attacks, have occurred in our own universe but have not been reported by the news media because no one has knowledge they occurred in the first place.

Although the petition garnered praise from an anonymous member of the Trump administration, who said he was overjoyed that "Science finally got something right", it gained harsh rebuke from a spokesperson for Kellyanne Conway who stated, "No! Bowling Green happened! Here! Not in some other dumb universe or because of 'alternative matter' or some other stupid scientist thing." A competing critical perspective came from the International Association of Physics, which released a statement asserting that "Although IAP is reticent to comment on political matters, we feel strongly that political discourse should be based on clearly demonstrable facts existing in our own physical universe." Referencing a claim in the petition that liberal journalists practiced something akin to "white male privilege" by privileging facts from our own universe over others, physicist Stephen Hawking remarked, "I'm not sure physicists are in the best position to talk about white male privilege."

Several lawmakers also expressed concerns about the future implications of a world where all alternative histories and futures were treated as real. Most vocal among them was Senator Elizabeth Warren who said, "What is this fact equivalency nonsense for parallel universes or alternative matter?! What would then stop this administration from claiming a terrorist attack on US soil supports drastic measures such as suspending the writ of Habeas Corpus? Or creating a registry for all Muslim US citizens as Trump promised to do after the San Bernardino attack in 2015?"

Newly confirmed Secretary of Education Betsy Devos declined to comment on whether she would support charter school curricula that taught fact equivalency between universes or that "alternative matter" events may occur in our own universe. She did however revise an earlier statement provided during her confirmation hearing that schools should be allowed to determine their own gun policies in order to protect against threats such as "potential grizzlies." The new statement read in part: "In light of new information we have received from these scientists, schools in rural districts will now be required to allow guns on their campuses in order to end the brutal grizzly massacres that have killed thousands of school children across the nation."