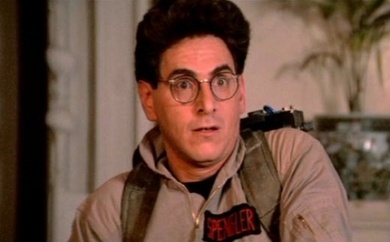 To borrow from comedian Patton Oswalt, who paraphrased the man himself on Twitter, the death of Harold Ramis Monday at age 69 left a Twinkie-sized hole 35 feet long and weighing approximately 600 pounds in popular culture. A comedic genius who was involved as writer, performer and/or director in Caddyshack, National Lampoon's Vacation, Animal House, Meatballs, Stripes, Groundhog Day and more, Ramis quite simply made movie-going fun in the 1980s.

But arguably it is his turn as Dr. Egon Spengler in 1984's Ghostbusters, which he co-wrote with Dan Aykroyd, that he'll be most beloved for. As I've previously written, Egon was a cool nerd; Ramis created in him an earnest parapsychologist from Columbia University who applied his science training to a belief in the paranormal. For a fictional character, it almost seemed like Egon (along with his ghostbusting team Peter Venkman, Ray Stantz and Winston Zeddmore) cast a long shadow over Syfy's paranormal investigative docudrama Ghost Hunters when it premiered 20 years after Ghostbusters.

The visual cues and familiar look from Ghostbusters were present when Ghost Hunters launched a modern genre of paranormal reality-TV in 2004 -- which continues today across multiple television networks. Instead of scientists by-day, we got plumbers with Grant Wilson and Jason Hawes. They were as ready to believe their clients and inject humor into an investigation, while rocking logo-ready TAPS (the acronym for The Atlantic Paranormal Society) clothing. Instead of a 1959 Cadillac ambulance/hearse, it was a black van. Instead of proton packs, they used digital audio recorders and nightvision cameras. And P.K.E. meters were swapped for K-II EMF meters. What's more, the impact of Ghostbusters, then Ghost Hunters (and Ghost Adventures, Paranormal State, Destination Truth, etc) influenced individuals across the nation to form groups and take up the hobby of paranormal investigation. It even kickstarted an entire paranormal tourism and event industry.

Of course, this can't all be traced back to Harold Ramis alone. His co-writer/co-star Aykroyd was raised as a Spiritualist, a philosophy/religion that encourages belief and communication with the afterlife. Aykroyd brought a lot of the theories from his upbringing to Ghostbusters, but he and Ramis together brought the funny, which was then improved upon with Bill Murray. It is up for debate but without the humor, the paranormal element would not have had the ripple effect we still see on unscripted TV and in the subculture of amateur ghosthunters.

Plus, Ramis and company made the admittedly surreal notion of pursuing the unexplained seemed so much fun and worthwhile, which inspired me in the realm of Paranormal Pop Culture studies and on my show Paranormal Paparazzi.

But don't just take my word for it. I wanted to get buy-in from other personalities within paranormal television so I approached some of the most well-known names from current and past ghost hunting shows for their take on the legacy of Harold Ramis and Ghostbusters on the paranormal community.

Grant Wilson, Ghost Hunters:
I was heart broken to hear that Harold Ramis had moved on to the other side. I am a fan of all his work. It was a key part of the laughter in my life. Of course, as a paranormal investigator, Ghostbusters was a huge inspiration. The success of those movies boded well for the potential exposure the field would one day have. What struck me even more than the comedy and special effects was the attention to detail. The science behind the equipment, the quirkiness of the crew, and most of all, their passion for the paranormal all ring true in the real world of paranormal investigation. To this day, when people accidentally call me a ghostbuster, I am instantly flattered yet I have to correct them -- but only out of respect for Harold and the crew. There was nothing quite like Harold Ramis and, unfortunately, there never will be again. But if there is a good side to this, it's that heaven is now a lot funnier.

Amy Bruni, Ghost Hunters:
I think Harold Ramis probably didn't realize the pedestal he and his Ghostbusters cast mates were put upon in the paranormal community. We worship that film. It all at once mocks us and gives us legitimacy when the "ghostbusters" become heroes. I saw him as a comic genius because of all his contributions to great comedies of my generation. But Ghostbusters was my clear favorite -- and frankly, I'd been holding on to this hope that we would see a third installment in the series and now that's impossible. It can't be made without Egon.

Aaron Goodwin, Ghost Adventures:
Harold Ramis did a great thing by co-writing and acting in ghostbusters. It allowed the public to see ghost hunting as a hot topic, and you could say it started a trend. After my years of hunting the dead, I have realized Harold was ahead of his time and must have known all about the paranormal. I only wish I could have had a chance to hunt with him

Katrina Weidman, Paranormal State and Real Fear:
Ghostbusters was a staple in my childhood and one of my most favorite and beloved films. As a kid watching these movies, and later the cartoon, over and over again I must have thought at one point, "Wow, that looks like a cool job." Let's be honest, these guys made it look good! What kid didn't want to be a Ghostbuster? Did Ghostbusters help shape the paranormal field? I think so. When people think of paranormal investigators running around in the dark looking for ghosts, the images of Harold Ramis, Dan Aykroyd, Bill Murray and Ernie Hudson usually come to mind. I'm often asked, "So... do you have a proton pack?" (Sadly, I don't) and it delightfully sparks a conversation of our favorite scenes and quotes, "Don't cross the streams." The success of Ghostbusters definitely opened the door for the paranormal to be more mainstream which in turn I think allowed people, who otherwise felt the topic was taboo or didn't even know there was such a thing as a "ghost buster," to get involved in the field

Chip Coffey, Psychic Kids and Paranormal State:
I've been in touch with Harold Ramis. He says the afterlife is a very nice place and he hopes he doesn't run into the Stay Puft Marshmallow Man. Seriously, Ramis and others involved with Ghostbusters provided us with a fun and fanciful film about the paranormal that has become a cinema icon.

John Zaffis, Haunted Collector:
I definitely feel Ghostbusters had a big impact on ghost hunting. Back then, things were just opening up about the paranormal. Harold Ramis will always be known for [his part] in that. To this day, we all say, "Who you gonna call? Ghostbusters."

Josh Gates, Destination Truth and Ghost Hunters Live:
As any kid of the '80s would attest, Harold Ramis was a grand-master of comedy. As someone who went on to spend a lot of time bumping around in the dark, hunting for ghosts for a living, he was also something of a professional role model. The tone that Ramis and Aykroyd struck in writing Ghostbusters made for the perfect approach to the paranormal. No matter how high the stakes (armageddon, by way of colossal marshmallow), there's a goofy, good-natured and electric humor that runs through the characters of the film like the lightning out of Egon's proton pack. It's the counterpoint to a topic that, by its very nature, stands to be weighty, morbid and, depending on your beliefs, utterly ridiculous. On Destination Truth and Ghost Hunters Live, I always try to keep that humor in mind. The investigation should be serious, but if you can't have an occasional laugh in the face of the immortal unknown, the whole thing threatens to collapse.

Ben Hansen, Fact or Faked: Paranormal Files:
Ghostbusters was one of my very favorite movies as a kid. I knew the theme song forwards and backwards. What I didn't know was that I would believe more in ghosts as an adult than I did as a kid watching those movies. I laugh that some of our current-day ghost hunting equipment is quite similar to what the Ghostbusters used. What I'm waiting for, though, is the "containment unit" and the ghost trap. If we could only find a way to develop technology to catch ghosts instead of just try and talk to them, then we'd be in business!