Indulgent, neglectful, authoritarian. Three types of parenting. Just seeing the letters that spell these words out sends chills up my spine. The names alone are enough to scare me. I don't want to delve further into descriptors because I know I'll identify with 8 out of the 10 characteristics posted.

Have I bought my children what they've asked for?
Many times, oh so many times. BINGO! Put your red marker on the Indulgent square.

How about that time you didn't make dinner for four five days straight?
BINGO again! You get to fill up the Neglectful row.

And then when you didn't budge about getting them a smartphone even though every kid in his class had one? (that one time? Who are you kidding it's still that one time)
Winner! Pile all your red chips in the center for Authoritarian.

Parenting is the most important thing in my life. It's what I think about when I wake up and right before I pass out at night. Parenting absorbs me and replenishes me. I love being the mother of my children. It's been my life for 20 years.

And I still don't know what I'm doing. I'm as terrified at times as I am at ease at others. Even when I had that high school boyfriend who convinced me that I could do a Civil War reenactment weekend doesn't compare to how at a loss I am for what I'm doing as a parent.

I whisper to myself at night, Forgive yourself as you forgive them. I've written on a note I keep in my purse, Mistakes are part of learning. Taped to my dresser room mirror is a yellow post-it, You don't just move on, you learn.

All these words I write to myself, meant to keep me going just until the point I feel like I'm not groping in the dark anymore and then someone rearranges the furniture on me.

It's the secretive way that I was as a child, never feeling that I would be understood or accepted. That memory of feeling so lonely in a houseful of people keeps me second-guessing if I'm giving my children what they need. There is a balance to them feeling in control, intact, independent and me guiding, encouraging, instilling.

I never felt I was able to have a say as a kid, and that made me give up. It took decades to find my own voice from that.

My three children turn to me. In their joy and in their anger and questioning of the 100 percent say I have in their lives. I'm at the receiving end of gratitude as well as the backlash that goes with looming so large in someone's life.

They have always felt safest with me. When I would shower, and they were infants, my husband would have to hold them up and to the side so they could peek in past the curtains to keep me in their sight. It was the only way to keep them from screaming their heads off. I would stand in the shower and soap up, singing-weeping a lullaby from the force of that maternal link.

I now shower without Peeping Toms. I don't even have to announce I'm going upstairs to do it. I used to wonder if the day would ever come when I wouldn't have to stand in the center of a room and megaphone my hands over my mouth,

"Mommy's going to go to the bathroom now. I'll be right back."

"Mommy's going to go downstairs and get the laundry. I'll be right back."

"Mommy's going to make a phone call. I'll be right back."

The land has leveled and I've got my own oxygen now. But it's only been a few minutes of free-breathing and the air has thinned again. My youngest has started conversations that sound less like an offer of ringside seats to a fight and more like being in the ring.

As he tries to find himself, I see how he's the one groping in the dark now. I have to remember I don't want to stop that process of him discovering who he is and the power of that. He is a child becoming a teen and he's caught between wanting the days of yesterday with the want to keep up with his peers. We all know it's easier to blame someone else for those feelings of still wanting to be with his mom than it is to know that it's him who does the opposite of what the world shows.

After all, our world doesn't have any video games, movies, or music that reward liking your parents. "You still like your mom? SO COOL! Extra points for that!"

Just because he hands me an invitation to a fight doesn't mean I have to show up jabbing. I can refuse the boxing gloves and stand holding my two arms open instead.

Whether he falls into them or not, it's his independent decision. But I never want to miss the chance of being the one they feel safest with. 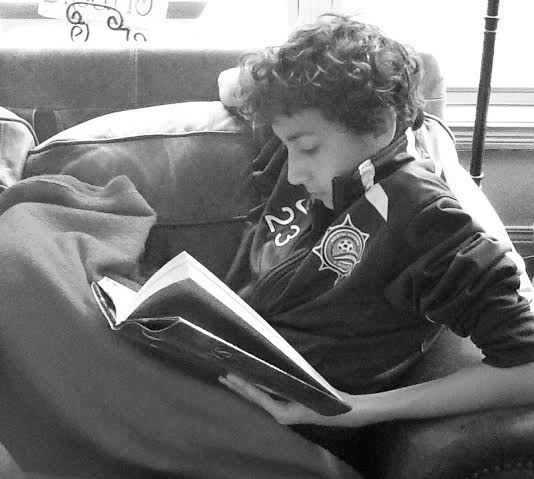 More:
Parenting ChildrenParentsMotheringTeens
Newsletter Sign Up
Raise the kind of person you'd like to know
Subscribe to our parenting newsletter.
Successfully Subscribed!
Realness delivered to your inbox

The Mothers Of America Need A Bailout. This Could Be The Answer.