There was a day last weekend when I had to fend off three separate sets of parents at the playground who wanted to square off in a heated match of Your-Kid-Hit-Mine-And-Now-I'm-Going-To-Hold-You-Accountable-For-Everything-Bad-In-The-Universe.
Like all gripping playground dramas, this one started over by the monkey bars. Boaz, my behavior-challenged 6-year-old son about whom I've previously written, had apparently pushed another little boy, whose father charged toward me, fire in his eyes, to alert me of the incident. Did I believe him? Of course. Boaz runs around hitting everybody, why is why taking him to the playground is nothing short of an exercise in masochism. But we were meeting up with friends and sometimes you just hope for the best, and I'd only turned away for a second to give his little sister, Ayla, a push on the swing. Which is when it all went down.

"I'm so sorry," I said to Angry Dad. "He's got problems and we've been working on them with doctors and therapists and medication and his kindergarten teacher. Is your son hurt?"

The boy was running around, smiling, his blond bangs flapping against his forehead.

"Oh, good. I really am sorry about that." But as I pulled Boaz aside -- his face flushed red, hot tears running down his cheeks; he knew that what he did was wrong, he just couldn't help it -- and massaged his shoulders in an effort to calm him down, a dark shadowy image loomed large overhead.

"That's it?" Angry Dad hovered above me. "That's all you're going to say?"

"What else did you want me to say?"

"You're a negligent parent. Your son is a terror. Do something about it."

"I'll get on that right away," I told Angry Dad. "Thank you so much for the advice."

Angry Dad retreated and I steered Boaz toward the sandbox area, where he quietly began digging a moat, filling it with water from a nearby fountain. Peace restored. Until all of a sudden, a woman wearing a long, white skirt, a pair of brown Birkenstocks peeking out from underneath, stormed straight toward us. She looked like a fuming white cloud.

"Is this your son?" asked Hippie Skirt, pointing to Boaz.

"I just want you to know that about half an hour ago, he hit my son."

"Sorry about that," I said. "It's been happening all day."

"Well, I just wanted you to know. It was really, really hard for me to watch my son get hit."

Hippie Skirt made a tight fist and placed it over her heart in that emotional Céline Dion sort of way. "It was just very, very upsetting for me."

"I really wish there were something that I could do. Does he need medical care?"

"Because if he needs stitches or he's badly bruised then you can send me the hospital bill. I mean it. Seriously."

I'm not sure why my offering to pay for their kids' (non-existent) injuries throws parents off so much. Are they looking for me to help fix the situation or just feel bad that it happened? Is shaming me the goal? Was Hippie Skirt hoping I'd get down on bended knee and kiss the hem of her trendy bohemian garment (I'm guessing Free People) like she was the second coming of Maharishi? Did she want me to congratulate her on being a way cooler parent whose kid would never hit anybody? Or, wait -- did she honestly think she was telling me something that I didn't already know?

When I was in seventh grade a fellow classmate named Kelly slammed me up against a locker in the hallway of our Massachusetts junior high and called me a "f**king f**kface." I was scared that she was going to smash my face in, but I was also thinking, Wow, her hair is so cool, all straggly and straight, she could totally pull off a tattoo and a morose record collection in a way that I never could. Oh, and I really liked her raglan AC/DC T-shirt (because I've always felt you need to have long, stringy hair to properly pull off a heavy metal tee.) Obviously, Kelly was just having a bad day, because two weeks later she was asking for my help in writing an essay on Otis Redding for music class.

Fast forward to now and it feels as though all the bullies have doffed their concert tees and curse words and grown into parents screaming at me that I've ruined the life of their kid. Whatever momentary humiliation Kelly might have inflicted upon me, nothing compares to the parental viciousness that permeates the modern day suburban playground: the histrionic eye rolls, the long, lugubrious sighs, the huffs and puffs and incendiary accusations.

Look, I know what you're going to say. I'm being flippant. And if it were my kid on the receiving end, I'd be just as upset. And you're right, and I have been on the other side. But that's missing the point. The point is that when you're parenting an explosive child and you're endlessly bombarded by a stampede of irate mothers and fathers it just doesn't do any good. It solves nothing. It's a complete waste of time. For both me and them.

Meanwhile, a group of boys surrounded Boaz, dumping sand into his swelling river. Boaz burst into tears; the other kids laughed, Lord of the Flies style. Boaz threw punches at the air. He went to throw sand but I grabbed him just in time. Parents pointed, they whispered. Thank God for the tinkling bell of the ice cream man as he rolled his cart across the playground. Popsicle distraction! I picked up Boaz, fetched Ayla from the swing and dug franticly around the bottom of my purse for cash. When all I came up with was my ATM card and a few orphaned pennies, Boaz erupted into a full-blown tantrum. Kicks, screaming, the works.

Which is when a man and a woman -- each of them carrying a toddler -- waved us over.

"I just want you to know that your kid was being rough out there on the playground," said the man.

"Oh my God, I had absolutely no idea," I gasped, dragging Boaz and Ayla toward our car. "Thank you so much for telling me." 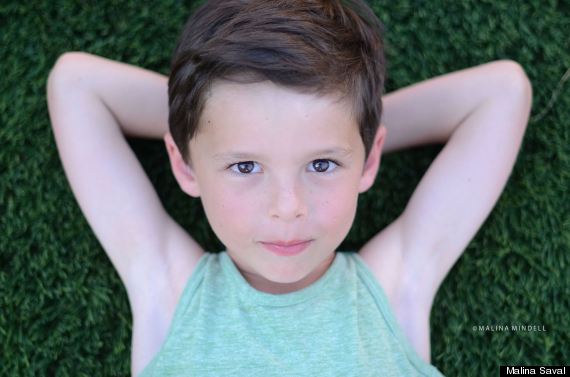 Author, "The Secret Lives of Boys: Inside the Raw Emotional World of Male Teens"