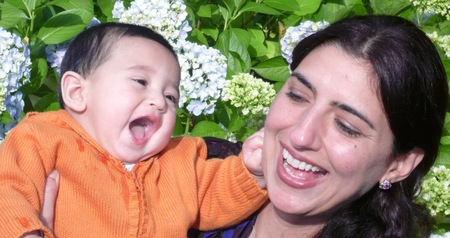 Whether you're a parent in the US or anywhere else in the world, raising your first child is invariably a steep learning curve. With so much on our plates, it's easy for parents to overlook caring for baby's teeth, but a few useful tips will keep us on track.

Aww...the First Tooth
A baby's first tooth erupts between four to eight months of age and typically by the time he or she is two-and-a-half to three-years old, every baby tooth should have erupted. Some children have a difficult time during teething, while others sprout teeth effortlessly. When babies are teething, they tend to be droolers and often refuse to eat because their gums hurt. Excessive drooling can irritate skin around the mouth causing rashes. Babies can become restless and fussy; the pain even keeps some from sleeping well. Tiny hands in the mouth and a willingness to bite on everything are sure signs of the baby being uncomfortable. You may even find them rubbing their cheeks to deal with the discomfort associated with teeth erupting at the back of their mouth.

What Should Parents Do?
Massage baby's gums with your finger or damp gauze. Keep the area clean and use teething rings. Chilled teethers are the way to go. Do not freeze the teether. Cold carrots are good substitutes if your baby can chew on solid food. To prevent skin rashes caused by excessive drooling, dab dry their chin regularly.

Tooth Care Starts Early
Start cleaning baby teeth and gums as soon as they erupt. Use damp gauze to clean them when they are just peeking and graduate to a soft tooth brush once they have erupted. Brush twice a day and floss once. Stick flossers are ideal for babies. Use safe-to-swallow, no-fluoride training toothpaste until your child learns to spit it out and then move on to the fluoridated toothpaste.

Save Your Child from a Nightmare: Nursing Bottle Syndrome
Nursing Bottle Syndrome (NBS), also known as Baby Bottle Syndrome, affects children less than five years of age. NBS is caused when baby teeth have prolonged contact with liquids containing sugar such as milk, formula or juice, resulting in extensive decay. I frequently see children as young as two years old who need fillings, crowns or extractions. 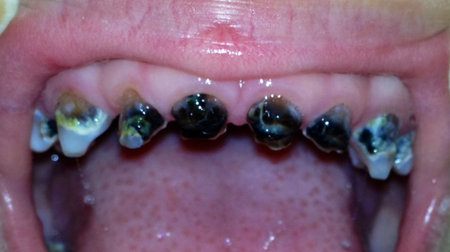 What's to be done? Wean babies from the bottle around 12-14 months. Never let your child walk around with a bottle filled with milk for more than 20 minutes. When children fall asleep while having a bottle or breastfeeding, the milk remains in their mouth all night long. Bacteria present in the mouth breaks sugar down into acid causing tooth decay. Breastfeeding is great for children but after their first birthday, have a bottle of water ready to swap after feeding so that any residual milk or formula is rinsed down. Aim to gradually reduce the frequency with which you feed at night.
Juices and sodas cause erosion of teeth and should be avoided. 4oz is the maximum amount of juice a child should consume in a day. Limit sticky snacks to once a day. Children should be fed every 2-3 hours. A typical schedule could be breakfast at 8:00 am, snack at 10:00 am, lunch at 12:00 pm and so forth. Water is the only thing they should be consuming between the meals. Also, dental examinations should begin at 12 months.

Here Comes the Tooth Fairy
Time does go by fast and before long, your six or seven-year-olds will come and tell you that their teeth are loose. Some may start losing their baby teeth a year earlier or later. Often, kids avoid brushing around loose teeth, so it is important to help them keep those areas clean. 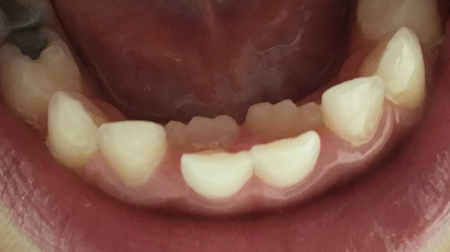 Over retained lower anteriors
Baby teeth usually fall out on their own. However, in some cases they can stubbornly stick around even after permanent teeth have erupted. Often, this happens with lower front teeth, resulting in 'shark teeth'. The permanent teeth grow behind the over-retained baby teeth. If the baby teeth are loose, they will fall out in a week or two and the tongue will push the permanent teeth forward. Sometimes the roots of baby teeth don't get resorbed; in that case, they might need to be extracted by a dentist. 'Shark Teeth' in upper arch often needs to be extracted and might not be a self-correcting issue. If neglected, it can require orthodontic intervention in the future.

The Six-Year Molar
Another important development is the appearance of the first permanent molar, also called six-year molar. This is a very important tooth that erupts behind the baby teeth. The jaw grows to accommodate the molar. 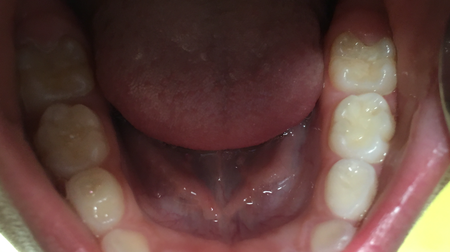 
Children aren't used to having a tooth so far behind in their mouths and can inadvertently skip brushing them. Given how big a tooth this is, it can cause considerable pain if it gets infected with food collecting around it. Salt water gargle, brushing and massaging the area will help ease the discomfort. As soon as the six year molar makes an appearance, it needs to be sealed. Sealant is like a nail polish coat that goes on top surface of the molar. It prevents food from collecting in groves and helps reduce the incidence of cavities.
Yes, dental care starts young. The better and more regular the care, the smaller your future dentist and orthodontic bills!

More:
healthy teethParenting Parentsbrushing teethteething
Newsletter Sign Up
Raise the kind of person you'd like to know
Subscribe to our parenting newsletter.
Successfully Subscribed!
Realness delivered to your inbox

Dentist and an author of children's books