When she gazes at her 4-month-old daughter, Toni finds it hard to believe that her own father has not reached out to her for months.

Growing up, the 24-year-old preschool teacher from Texas had a strained relationship with her father. He was an alcoholic, she said, who frequently lied to her and struggled with mental health issues. When her parents divorced last year, Toni recognized an opportunity to sever ties. In September, not long after her own daughter was born, she wrote her father a letter, explaining that she no longer wanted any contact with him.

“Part of my thinking was, ‘I don’t want to voluntarily put bad people in my daughter’s life,” Toni said. “I kind of see it as protecting her.”

Toni was surprised and hurt when she didn’t hear from her father. A part of her, however small, thought her letter might spur him to action. “I look at my daughter and I say, ‘I don’t care what she says to me, I could never not be a part of her life,” said Toni, who like all of the estranged adults in this article, asked that only her first name be used. “Sometimes, I don’t know whether I’m sad or angry. … Right now, I think I’m both.”

There are no clear estimates of how many grown children in the U.S. are estranged from their parents, either by their own choice or their parents.’ But experts say estrangement is on the rise, and far more common than is widely believed, presenting challenges for a new generation of men and women on the brink of parenthood.

Estrangement is neither an illness nor a condition that can be diagnosed, but the fracturing of a family can be no less devastating -- and there are no clear treatments or doctors to help. With few obvious avenues of support available to them, men and women who are estranged from their parents are often left alone to wrestle with what, exactly, it means for them to become moms and dads themselves. Where do you turn for guidance and support when your own parental relationships are emotionally fraught and your role models have fallen short?

Few psychological investigations have delved into the causes of parental estrangement. In some cases, adult children cut off contact with one or more parents because of mental health or substance abuse issues; in others, they are fleeing emotional and physical abuse, or were abandoned. According to Joshua Coleman, a San Francisco-based psychologist and author of When Parents Hurt: Compassionate Strategies When You And Your Grown Child Don’t Get Along, the uptick in parental estrangement is also due, in part, to broad cultural factors.

“In the past five decades, there’s been much more emphasis on the self -- it’s a culture of individualism,” Coleman said. “Children ask, ‘Does this work for me?’ ‘What am I getting out of this relationship?’ ‘Does it make me happy?’ That’s a big force.”

Another is divorce. Coleman estimated that roughly 80 percent of the families he works with in his private practice have experienced divorce, which increases the risk of estrangement. Children may become allies with one parent, he said, or may be poisoned against one parent by the other. (Studies suggest that “parental alienation,” in which one parent turns a child against the other, occurs in 10 to 15 percent of divorces involving children.)

While the contributing factors vary, the hush that surrounds parental estrangement is a constant, Coleman said, which is why he calls it a “silent epidemic.”

“It feels shameful to admit to. People worry that if they do talk about it, on either side, they are going to be blamed,” Coleman said. “There aren’t the normal kinds of support groups that exist for other sorts of traumatic or life-stressing experiences.”

With so little awareness, children who are estranged from their parents often feel isolated and afraid of falling into familiar patterns, so much so that in some cases, they simply opt out of parenthood altogether.

“There’s not an insignificant number of people who just don’t have any confidence that they could raise children, because they feel like their role models were so terrible,” said Coleman.

But others, like Mike, a 35-year-old who lives in Virginia, work through it. Mike, who served in the military for four years and now works in logistics operations for the government, has had virtually no contact with his father since his parents divorced when he was a baby, and his father left (though he did try, unsuccessfully, to reach out to his father when he was a teenager).

Growing up, he regarded his mother as a hero who sacrificed for him, he said, even though she frequently kicked him and hit him with “anything in reach.” By his mid-20s, when he returned from the military, his view of her soured.

“My mother would say things like, ‘You owe me. You ruined my life,’” Mike said. “She knew I would feel bad, and that I would give her what she wanted.”

Mike helped her buy $2,000 worth of furniture he could not afford, and a $12,000 car that she defaulted on that was in his name. She was, he said, “unkind” to the woman he fell in love with, who eventually became his wife. She tried to sabotage their relationship, writing letters to his future wife’s father, accusing Mike of being physically abusive, and out to steal the family’s money.

Eight years ago, Mike cut all ties with his mother, and he and his wife moved to another state. As they thought about becoming parents, he worried about his own parents’ legacy. He fretted that he might somehow pass along a “crazy gene,”) as well as how his relationship with his parents might sculpt his own parenting.

When he and his wife attended a childbirth education class and were asked to share their fears, other attendees talked about no longer being able to hang out with friends, or sleep deprivation. “My concerns were like, 'Am I going to be a good parent?'”

Unsurprisingly, experts say that many men and women with extremely troubled parental relationships often are particularly mindful of how they want to act as parents themselves, as well as the behaviors they hope to avoid. Psychologists use the term “post-traumatic growth” to describe people who are changed for the better by a traumatic event, and it is both an outcome and a process, explained Richard Tedeschi, a professor of psychology at the University of North Carolina at Charlotte.

In Tedeschi’s estimation, half to two-thirds of people who survive a trauma -- whether it’s a particular event, an illness, a troubled relationship or any experience in which their “philosophy of living” comes into question -- later undergo changes that they value and maintain.

For her part, Joanna, a 33-year-old former high school teacher who has stayed home with her now 2½-year-old son since his birth, feels estrangement has been a positive force in her parenting. Joanna has not seen her father since she turned 17, when he refused to sell his portion of the home where Joanna and her three siblings had been raised to her mother and soon-to-be-stepfather. It caused a “huge rift,” she explained, and “a bunch of horrible things were said.” She and her siblings decided that they no longer wanted their father in their lives, and he, in turn, made no effort to speak to them again.

The estrangement is not something Joanna thought much about until she became pregnant. Then -- full of hormones and on the precipice of parenthood -- she began to ruminate, thinking how strange it might feel for her father to not know her baby, or what she would do if he ever called. After her son was born, she and her husband talked, deliberately and often, about how, exactly, they wanted to parent in direct response to her father’s behavior.

“For us, it’s really been a lot of talking about, ‘How do we do things differently, so we don’t follow in those footsteps?’” she said. They make a point of not yelling, and regularly stop and make sure they’re tending to the basics: Are they treating their son nicely? Does he feel like his parents are present? Are they talking about things as a family?

For his part, Mike agrees that being estranged from his parents motivates him to be a better father -- though fear, about what might happen should things go wrong, always lingers.

“I hesitate to say that I’m different, but I do think I’m self-aware, as a parent, because of the things that I’ve gone through,” he said. “I don’t want to fail him. I don’t ever want to feel like I wasn’t the best I could be for him.” 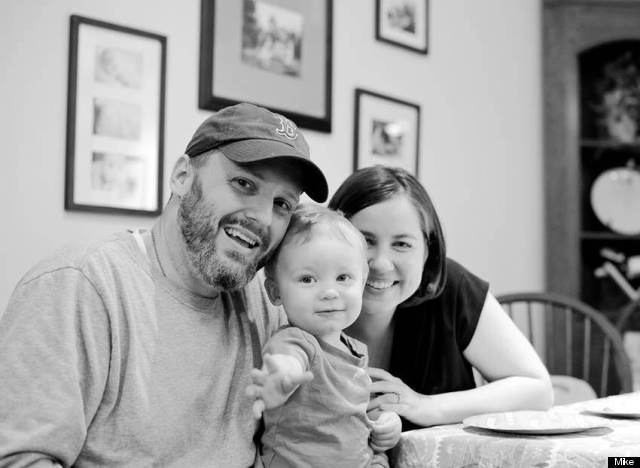 Mike believes that in many ways, estrangement has made him a better father, despite his fears.