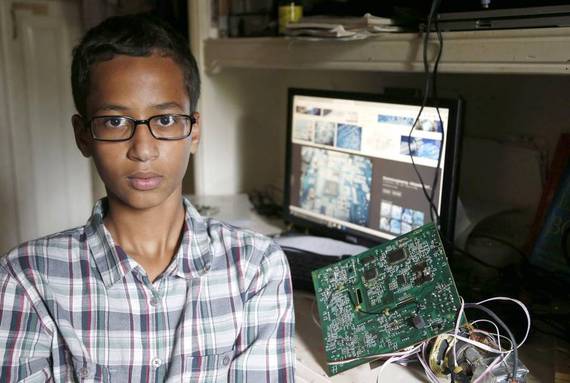 It's OK to shine, just not too brightly if you're a young brown Muslim in Irving, Texas.

14-year-old Ahmed Mohamed who tinkers in electronics with dreams of attending MIT, simply wanted to impress his new teachers by showing off his homemade digital clock. Instead, the 9th grader was later detained, arrested and relocated to a juvenile detention facility, where he wasn't permitted to see his parents until his release.

I immediately thought of my own son, Noah, who at the age of eight informed me that he wanted to be a "blowupintologist" when he grew up given his love for all things Minecraft. Now 11, his sights are set on inventing the prototype for a sound-proof "gaming pod simulator" engineered to customize music, games and educational applications. Wow. Ready, Set, STEM...here we come!

Like other parents, I want my son to feel as though his options in life are limitless. With budding career interests, he needs to feel supported at home and in the classroom along that journey. And yes, part of my responsibility is to help him navigate inherent roadblocks along the way.

This brings me to a challenging dilemma for parents of young aspiring children of color: At what point do we caution our kids that their own dreams and achievements may be eclipsed by racism, bigotry and injustice?

Imagine being that kids parents and having to say, "We know you just want to learn and create, but the world isn't ready." Imagine it.

I was in the 5th grade when my parents comforted me after a racist encounter with a teacher from school. My mother and father listened closely as I recounted how Ms. Booth told the entire class that I would "never have what it takes" to go to college. The absolute shame I felt on that day is unforgettable. I was actually one of the top students in the class, and a member of the GATE program at school. Why didn't she believe in me?

Nearly every time I relay this story, I'm met with accounts from other people of color with similar stories of their own. While I would go on to graduate from Berkeley, later also acquiring an MA in Education, the incident with my 5th grade teacher stays with me. In fact it's fueled my commitment to supporting minority youth advancement in education for nearly two decades.

But it's also left me with a hyper-awareness that racism continues to detour some of our best and brightest minds from reaching their full potential. We may be able to shake our heads in momentary disgust at incidents like these, but when it happens to our own children, the task of reconciling overt racism and discrimination is far more difficult.

So how do we best support our kids after encountering racism?

Even though they may not have the language to effectively articulate their feelings, creating a safe space for our kids to express their vulnerability without judgement is worth its weight in gold. Listen to your children. Sometimes it's easier to project our own experiences with racism (or lack thereof) on to our kids, and overshadow their ability to process painful emotions and be heard. We must be mindful to listen from where they are, not the other way around. Beyond acknowledgement that racially motivated incidents are morally wrong and clearly unacceptable, our first line of defense as parents against injustice should be that our children know we stand in support of them unconditionally. 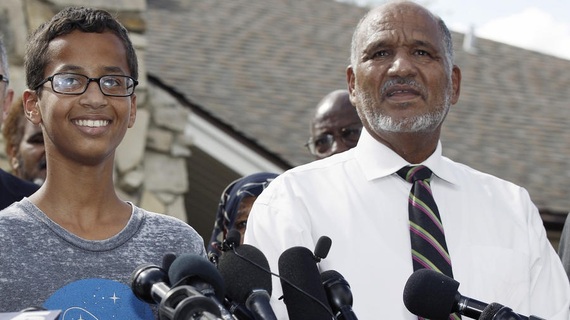 The silver lining for Ahmed Mohamed is the tremendous outpouring of support across social media, - a seemingly "good ending" to what began as a sickening illustration of racial and religious injustice beginning with his teachers at school. From scientists at MIT, to Facebook's Mark Zuckerberg, and a personal invite to the White House from President Obama, thousands of people across the globe are rallying in support for young Ahmed.

But even while the social media hashtag #IStandWithAhmed continues trending, many of us know he's not out of the woods yet. The impact of racially motivated incidents can have long lasting effects beyond a high-profile trip to the White House or a tour at Harvard. When our children are repeatedly targeted or discriminated against, those initial feelings of self-doubt, shame and rejection can also resurface later. Familiarizing ourselves with local and national organizations promoting youth empowerment through social justice work is a great place for parents seeking ongoing support.

A former mentor once advised me to be careful of seeking counsel from those who had never reached where I was aiming to go. Ahmed Mohamed now has a great team of mentors in his corner. Let's make sure our kids do too.

This article first appeared on Literatigurl.com

Kimberly Cooper, MA is a writer, activist and former chief of operations for the "Reducing Childhood Obesity" initiative -- a partnership between First 5 LA and the Los Angeles County Department of Public Health. She's spent nearly 20 years working in project development for nonprofit and community based organizations throughout Los Angeles. Her writing has also appeared in the Huffington Post, Los Angeles Times, San Francisco Chronicle and Literatigurl.com.