One of the most humbling things about my kids growing up is realizing that I still have growing up to do myself.

I'm a reluctant empty nester. And while I'll always be my kids' mom, having the chicks out of the roost and on their own means I've had to adjust the way I parent. Contrary to the hardwired inclinations that tempt me to coddle and meddle, I'm learning to stay out of their way and let them live their lives as the adults they've become. It's not easy. Sometimes I want to have a tantrum. 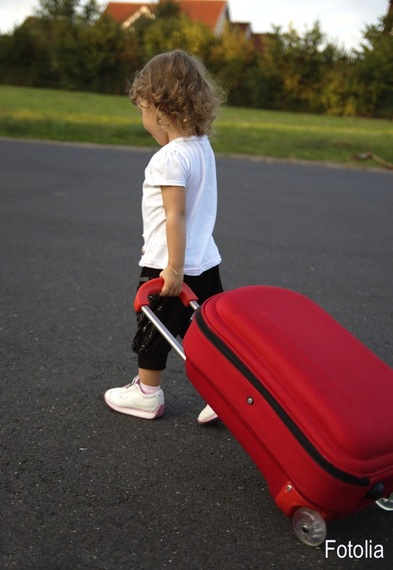 I swear yesterday I was driving the middle school carpool, but suddenly, somehow, both of my children are in their 20s. They also live 2,000 and 1,600 miles away, which, while gut wrenching at times, just might make it easier for me to live and let live and more difficult for me to become a stalker. This way, I can't drive by to see if their cars are in the driveway, show up with a healthy lunch at their workplace or introduce myself to bosses and college professors.

I figure there's got to be a happy medium between helicopter parenting -- like the friend who has a GPS tracker on her 30-year-old's phone -- and utter detachment. I want my kids to know I take an interest in their lives but I recognize, even though inquiring minds want to know, there's also such a thing as TMI. All I have to do is think back to my own 20s to realize there are plenty of things we don't want our mothers to know.

My daughter was excited about the new life she was starting when she moved half a continent away, but I was nervous. I wondered if she was ready to be on her own. I didn't understand then what I do now: Much of my reluctance was because I didn't know how to be a parent from 1,600 miles away. At the time, a family therapist gave me this crucial piece of advice:

"The best thing you can do for her is let her know you have confidence in her ability to make her own decisions and manage her own life."

Based on that wise counsel, I continue to adjust the way I parent my adult children. I'm learning as I go. Here's what's working for me right now:

1. No advice unless they ask. I'm sure I slip up on this one in my efforts to be helpful, but I strive to remember that "unsolicited advice is criticism." I don't want my kids to stop sharing the details of their lives because they think they'll be corrected and judged. And really, don't we all just want someone to listen without trying to "fix" us? And if they do ask for advice? Let them know it's okay if they don't take it.

2. Compliment, don't criticize. Or I just try to zip it if I can't dish out the compliment. Whether it's clothing, friends, facial hair or piercings, like the old saw says, "If you don't have anything nice to say, don't say anything at all." Of course sometimes I mess up, like on a recent visit when I said to one of them, "Gee, your toenails are kinda long," and asked another, "Is there a plan to grow out your hair?" Honestly, I kept my mouth shut that time my kid texted me a selfie sporting a newly shorn Mohawk, but it was really hard. And when I admire something -- whether it's commitment to studies or career, a new apartment, a fabulous shirt or even (gulp) a cool tattoo -- it's important for me to let them know.

3. Don't demand their time and attention. In other words, no command performances. No one likes to feel pressured to spend time with their parents. And, as tempting as it is to succumb to emotional blackmail, I won't guilt my kids into choosing me over other family members or obligations. I once felt that kind of pressure from my mother-in-law and vowed never to inflict it on my own kids and their partners. I also try to be discerning about how much I contact them. If I called or texted my kids as much as I thought about it, I'd make a colossal pest of myself. I've learned it's okay if they don't respond right away, too. It doesn't mean some terrible fate has befallen them. They're simply busy living their grownup lives.

4. Stay out of sibling and partner conflicts. It's rare that I'm even aware there's an issue between my kids or their significant others. If they seek me out, it's best if I just listen, speaking up only to assure them their happiness is of utmost importance and that disagreements almost always blow over or work themselves out. No unsolicited advice. No piling on. No blame. No triangulation by running interference and brokering peace agreements.

When we have independent, adult kids, we're no longer haranguing them about grades, curfews and leaving the car without gas. We can share a bottle of wine over dinner, discuss mature, worldly topics and even, occasionally, ask them for advice, which I've had the privilege of doing several times lately -- and the advice they give is good!

I love them like crazy, but hopefully I don't drive them crazy. If I do, I hope they'll let me know. I'll try harder to be a grownup parent who respects her adult children's boundaries and encourages them to spread their wings. And whether they're well grounded or prone to flights of fancy, I think they know they'll always have a soft place to land.

What lessons have you learned from your adult children?