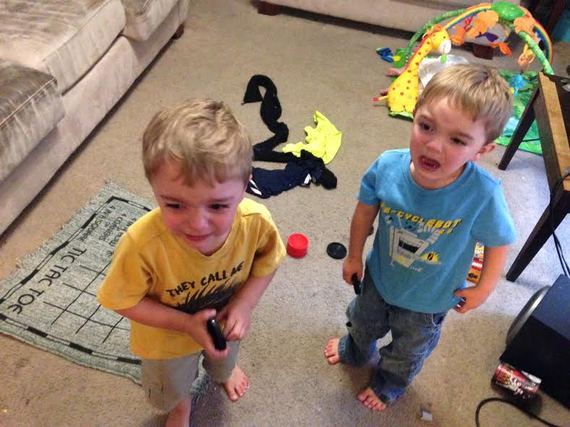 Sometimes I feel like I'm doing a pretty good job as a parent. Relationships are good, all those consequences we've put into our Family Playbook--a list of infractions and their expected consequences--are well understood, the house is in almost perfect order.

And then my children wake up.

It only takes seconds to realize that they are completely different people today.

Not only have they forgotten all the new infractions and consequences we brainstormed yesterday, but they also no longer care about getting to school on time or wearing clean clothes or keeping their room even the slightest bit tidy.

Yesterday they liked the grilled broccoli and cauliflower and carrots we brushed with olive oil and sprinkled with sea salt and roasted in the oven. Today they gagged just looking at them.

Yesterday they all sat perfectly still in their separate spaces while their daddy read two picture books and I read a Narnia chapter book and again while we engaged in our ten minutes of Sustained Silent Reading time and then again while we did our meditation breathing and prayer time. We didn't have to remind them once to get back in their spots or stop talking or that, no, an art journal is not a book you read and, no, the pen in your hand is not necessary during reading time (unless you're taking notes--which he was clearly not).

These kids are insane.

I've often joked that parenting is like living in an insane asylum. But the joke is usually true.

Insanity is defined by Albert Einstein as "doing the same thing over and over again and expecting different results."

THIS IS WHAT KIDS DO, EVERY SINGLE DAY.

They try to write during story time, even though we've told them a billion times it's not allowed. They try to sneak that LEGO toy into the bath tub, thinking this time will surely be different and we won't object. They seem surprised that 8 p.m. is lights out, even though nothing has changed in their thousands of nights.

The problem is, our kids are the least consistent people on the planet. Every single day they wake up completely different people.

The bigger problem, though, is that they give us that one little taste of expectation realization, and we think they CAN sit still for two stories and a chapter book.

And we keep expecting it every other day.

For as long as we've had twins (three years), I have fantasized about two boys napping in the same bedroom for more than an hour and a half.

We were spoiled, because our older boys took three-hour naps and could be trusted to sleep in their rooms with their doors closed.

The first time we left the twins for three hours with the door closed, they pulled down the forty-four shirts in their closet, painted with poop and ate the cardboard pages of Goodnight Moon.

So the next time I set a timer for two hours (because surely they'd just woken up early) and I sat outside their door to work on some deadline material. I could hear them shrieking, but we'd baby proofed everything, and there were only two mattresses on their floor (not even beds, because twins can destroy furniture in 3.4 seconds). Nothing they could get into. Nothing that would hurt them. Nothing to occupy them for two hours.

They got really quiet, but I didn't worry. We're all quiet when we're sleeping.

When the timer went off, I opened their door and found them sitting on clouds, all the stuffing ripped out of the lone Beanie Boo someone had left in their room.

The next day, I opened their door. I sat right outside. I corrected them when they so much as moved.

AND THEY FELL ASLEEP. FOR TWO WHOLE HOURS.

Oh, thank God, I said. It is possible.

So, of course, the next day, I did the exact same thing. Except as soon as they were asleep, I went to my room to do some more involved work. Two hours later, they had knocked their (babyproofed) closet doors off the hinges, strung all their ties from the ceiling fan and neatly lined up all their shoes under their mattresses.

It's maddening and confusing and impossible to keep up with these every-day-different children.

It's impossible to know that today the 6-year-old will follow all the rules and help with everything around the house, and tomorrow he will wake up a defiant little monster.

It's impossible to know that today the 4-year-old will love reading those books to me but tomorrow he will wake up acting like he'd rather eat spinach than finish the last five sentences of that Little Bear story.

What's a parent to do?

We just keep doing the same thing over and over, expecting different results from this insane asylum. Because, you know. Consistency and all.

And if they're not, well. At least there's red wine. And chocolate.

And a lock on our bedroom door they haven't learned to pick. Yet.

More:
parenting humorParenting parents-dadsParentsmodern parenting
Newsletter Sign Up
Raise the kind of person you'd like to know
Subscribe to our parenting newsletter.
Successfully Subscribed!
Realness delivered to your inbox