One of the greatest lessons I've learned as a parent is that parenting is not about me or my husband. It is, and always will be, about our child. From the earliest days, our lives were dictated by our infant's most basic needs: breastfeeding on-demand, dry diapers, warm clothes. Those early choices had nothing to do with our wants and needs as parents, they had everything to do with what our son needed (and continues to need). 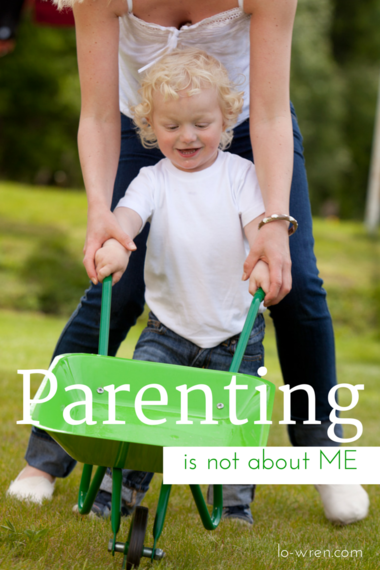 Too often, I see parents caught up in a battle between their own wants and their child's, and it is typically a cause of stress and strife in their lives. I don't mean to infer that one's life stops once s/he becomes a parent, but life definitely does change. One of my first conscious thoughts about this change was having my son in the back seat of my car; it dawned on me, as I was out attempting to run errands (in-between backseat breastfeeding and diaper changes) that the pace of my life was forced into change. This realization came about from the oddest of things: the routine of strapping my son into his car seat, arriving at our destination, unbuckling him, arranging him in his carrier and repeating again after our first stop. Gone were the days when I could simply hop out of my car and run into a store for a quick errand.

As my son grew older, I became even more aware of how his routine dictated my life. Errands had to be planned for the lightening-quick periods between naps, and outings with other moms required skilled planning and coordination between our children's schedules. Having invested in a healthy sleep routine for my son often meant that we had to forego many of the activities new moms do with their babies (we didn't attend our first story time until well after my son's first birthday because it was always held during his first nap of the day). My wants, my need to socialize with other mothers was often put on the back-burner, because my son's need for sleep (and the health benefits associated with adequate sleep) was greater than my own need to socialize.

As my son approached toddlerhood, parenting became more of a challenge, as my role became much greater than caring for his basic needs. Parenting became modeling, balancing nurturing and fostering my son's need for independence. When D abruptly stopped nursing at 21 months (to the day), it marked a significant change in our relationship, one that I felt with an intensity that matched the milestone. The end of breastfeeding, while an end to a physical act, also carried enormous symbolism; it was as though an invisible cord, stretching between myself and my son, had been severed, releasing the two of us to go about finding our respective selves. Never having bottle-fed (my son wouldn't drink what little breast milk I could pump from a bottle), the end of breastfeeding meant that I now had the freedom to create space and pursue some activities without my son. For my son, the end of breastfeeding signified one of his first acts of independence, something I love to foster.

As D approached the age of 2, he was continually experimenting with his newfound independence, which marked yet another stage of parenting: setting boundaries and expectations. This marked the 'trying' period of parenting, one which we're still in, as repetition and constant reminders are how we remind and teach our son cause and effect, proper behavior, manners and respect for others. Again, none of this is about my husband and myself, this is about how our son relates to the world and the people in it; it is about how he relates to you when he meets you on the street. Is he polite? Does he approach and treat your child with respect? This is where my focus lies these days.

Nurturing is not lost now that my son is 2 1/2, but I find myself constantly balancing the lines between meeting my son's needs and overindulging him. My job as a parent is to help shape my child(ren) into being a respectful, conscientious, independent person. As a parent, I remain accessible, but do not hover (I believe in children exploring new things, bumps, bobbles, burns and all). As the parent of an only child, I continually balance meeting my son's needs without overindulging him. This translates into me having to 'stick to my guns,' even when it can often be tempting to become a pushover with my only child, giving in to his every desire. In my heart, I know that granting my son's every wish will create unrealistic expectations for him, and set him up for disappointment later in life; my job as a parent is to teach my child how to stand on his own.

These days, life is all about consequences for my son. I teach D about the consequences to bad decisions and inappropriate actions each day, and often use the removal of 'privileges' to drive home this idea. Going to the library is a privilege, as is a trip to the store (my son loves to go on outings); if bad behavior and failure to follow instructions leads up to our planned outing, that outing is canceled with an explanation and a review of expectations.

Do I like having to cancel plans or leave fun activities early? No, but parenting isn't about me, it's about my child. Missing a playdate or postponing an errand is a small price to pay in the long run...

Lauren Stevens is a freelance writer and editor, whose work can also be found on Scary Mommy, BlogHer, and Mamapedia. When she's not chasing her rambunctious toddler, Lauren can be found blogging at lo-wren.com and tweeting nonsense from @lowrenblogs.

More:
parenting advicemothersMotherhoodParenting Parents
Newsletter Sign Up
Raise the kind of person you'd like to know
Subscribe to our parenting newsletter.
Successfully Subscribed!
Realness delivered to your inbox