A few days ago we had a drywall repair guy in the house fixing up a few things. The boys and I spent the morning building train tracks in the living room, hanging out in our pajamas, being calm, being well-behaved. I found myself taking extra care in talking to the boys, using my soothing voice to explain why we had to share the diesel engine even though everybody really liked the diesel engine. I used my calm words to remind Teebs to use his words. I took extra, extra care to make sure the boys were well-behaved, to make sure I was well-behaved... because heaven forbid this old guy patching up some drywall in the basement heard me get frustrated with my kids. Heaven forbid this guy that I've never met before and will probably never see again would think my kids ever get rowdy and I ever have to call them down.

When the guy left he gave me a really sincere smile and remarked how well-behaved my kids were, I replied with a nervous laugh just hoping he would close the door before the boyish bickering, poking, and name calling started. But really, I was amazed at how much of an impact my patience had on Bub and Teebs.

It's not that I'm impatient, but with three boys I can get rushed. Like when Bub was debating between two Lunchables, trying to decide which one would make the perfect lunch that day, and I've got a kitchen counter full of cold groceries getting warm, and a plate full of my warm lunch getting cold, and I want to just roll my eyes and say Would you just pick one already!... but something stops me. Because in the second before I say it, I realize that this is probably the most exciting decision he'll make all day. The most important. And this matters to him. That little bit of waiting, that little bit of patience, it goes a long way.

And nothing says patience like a rainy morning (this was a few minutes before the repairman arrived.) 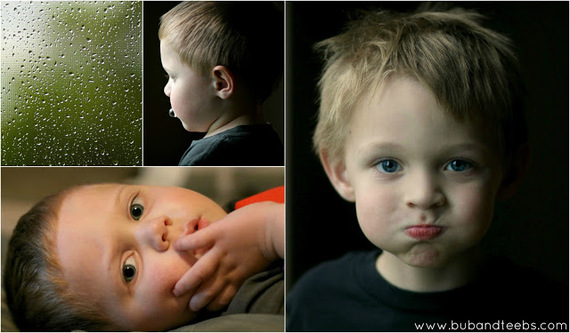 Teebs blowing spit bubbles while staring out of a rain spattered window. Bub taking a rare moment to volunteer to be in front of the camera. Scooter snoring softly in the bedroom.

It's hard with three kids, but I'm learning how to slow down. We're slowing down like there's a drywall repairman in the basement.