When my daughter, now 4, was an infant, I thought having a baby was the hardest thing in the whole entire world. It was my Everest. Everything about it was hard. The nonstop crying, the constant breastfeeding, the being exhausted and hormonal all the time. There's a pretty good reason why I thought that: because it is hard. And no matter how many people have said it before me, that doesn't make it any less true. It is just so damn hard.

But the mistake I made was waiting, hoping, wishing for it to get easier. All this waiting I did for things to get easier and while the postpartum fog did lift at some point, as I slowly came out of the trenches and back into the world where actual human beings lived, it never really did. The demands of parenting never really got easier. They just shifted.

Dirty diapers turned into potty training and for a brief moment, I said "hooray!" but then were the terrible twos and maybe worse, the threes. There was learning how to discipline and trying to navigate shifting my social circle to a more supportive mom-friendly one and feeling my own growing pains. Then there was preschool and separation anxiety (mine and my daughter's). There was deciding to do it all over again and vomiting up my insides and feeling so sick I wanted to die while trying to parent a 3-year-old. There was feeling so insanely divided when my baby came and wanting time to bond with him so badly and feeling layer upon layer of guilt. There was being exhausted again and easily frustrated and so many other painful and frighteningly hard things about parenting.

Here's the truth that I know no one wants to hear: Parenting doesn't ever get easier.

I know when you're covered in baby vomit with your boobs out 24/7 and the mailman lingers just a little too long and you feel so conspicuous and uncomfortable and you're really, really just right there -- in it, you think this is the hardest thing you've ever done. And maybe it is. For most of us it is.

But the truth is there will be more hard things, maybe ever harder than you can imagine right now. They will just be hard in different ways. Like teenagers who hurt you, not by accident like a toddler who head butts you in the nose every morning without fail. But on purpose. An intentional "I hate you, Mom," that cuts you so deep you start to believe every choice you've ever made for your child is wrong. And you will cry and maybe scream or yell or wish you were anywhere else.

No, parenting doesn't get easier, but there is a silver lining. While your job as a father or a mother will likely never be easy as you wish it was (even if the hard part is just watching from a far and trying to be good at that), you will get better.

As a parent, you can't help but grow and to learn. Every conflict, every sassy attitude or untimely spill is an opportunity for growth. Every time we fail or raise our voice or give in when we know we shouldn't, we're growing. There's fading away and coming back to yourself and discovering and rediscovering what everyone needs and what to do and how to be the kind of parent you want to be. And it will break you down one hundred times, but you'll keep doing it because there's a better you on the other side.

Parenting doesn't get easier. It just changes color and shifts it's shape. One day your 4-year-old will be throwing the most massive public tantrum and you'll be staring into you cuddly baby's eyes thinking, what's so bad about this? Did I really think this was so hard? I could stare at this blubbery, smiling boy all day. And when he's up again to nurse at 4 a.m., you'll think the opposite. "Gosh, 4 is really where it's at." There isn't one version of hard. It's all hard and that's why we have to be shape-shifters ourselves.

Instead of waiting for calm waters, somewhere along the line we learn to navigate the rough waters. We can't help but become more in tune with the current. And one day, no matter how big the storm, we find we are still in awe of how big and beautiful an ocean we have to ride on. 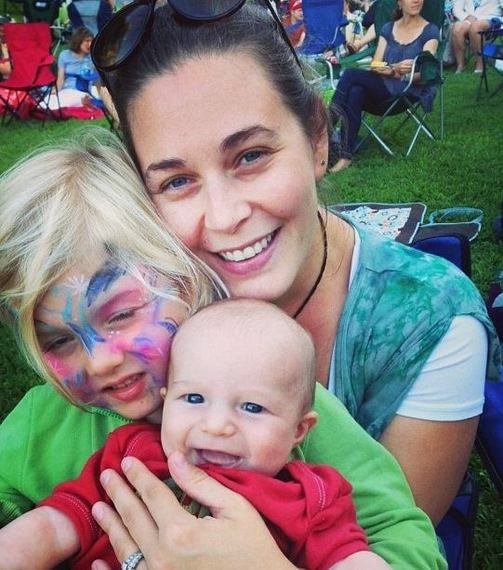 More:
parents-having-a-babyMotherhoodParenting Parentsfatherhood
Newsletter Sign Up
Raise the kind of person you'd like to know
Subscribe to our parenting newsletter.
Successfully Subscribed!
Realness delivered to your inbox