I've often marveled at how some adults who had the most horrific childhoods are so resilient and successful while others continue to suffer as adults. Likewise, affluent and relatively uneventful childhoods do not reliably predict later happiness in life. Research demonstrates that while some outcomes are largely due to our genetic blueprint, how we shape that blueprint is the key to thriving.

As a parent, I have always been preoccupied with figuring out how to help my children process new experiences in a healthy way. Would the tragic death of a teacher who was hit by a car in front of her students scar my daughter? Would being late to learn how to read erode my son's confidence? And would something as frustratingly commonplace as losing my patience with my children impact their development? As a trial lawyer accustomed to relying on evidence and expert opinions, I wanted neuroscience to help guide and improve my parenting.

Research shows that one of the best predictors of success in school and in life is not IQ scores (no surprise), but capable executive function. Executive function is essentially the Chief Executive Officer role of the brain, i.e., the job of integrating key systems of the brain to execute high-level cognitive tasks, including planning, problem-solving, and decision-making. According to a study by Harvard's Center on the Developing Child, executive function skills help us "focus on multiple streams of information at the same time, monitor errors, make decisions in light of available information, revise plans as necessary, and resist the urge to let frustration lead to hasty actions."

For children, emerging executive function skills are the building blocks for learning to read and write, remembering the steps for performing arithmetic, participating in class discussions and group projects, and interacting socially. In short, executive function, depending on its strength or weakness, will assist or impede the development of both cognitive and social capacities.

While there has been much attention focused on strengthening executive functioning in children with Autism and ADHD, there is little focus on boosting executive functioning in all children through practice. And from a parenting perspective, there is almost no discussion of ways to help your children build these skills during the stages when the pre-frontal cortex of the brain is developing and maturing, from as early as the age of three through adolescence. Yet researchers at the Harvard Center on the Developing Child have long concluded that providing the support that children need to build these skills at home, through practice as applied and honed with experiences, "is one of society's most important responsibilities."

I will be exploring and writing about the ways that researchers, experts, and parents strengthen children's executive function skills as they encounter universal life experiences. My philosophy (and that of little BLUEPRINT) is this: Teach children to L.E.A.D., and they will thrive. That is, regularly help children as part of their daily routines to integrate:

How does this work in practice? By empowering children to develop their own plans as they encounter new experiences -- for everything from celebrations (e.g., creating a plan to make a holiday meaningful) to the most difficult of life's challenges (e.g., creating a plan to mourn) --children integrate the key systems of the brain and boost executive functioning. Their ability to do this at a young age is astounding. 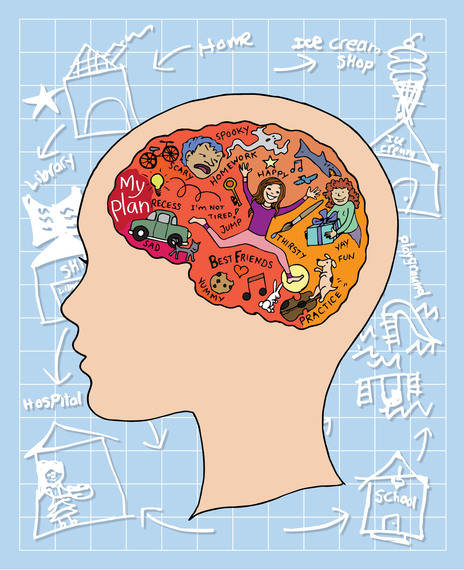 Mounting empirical evidence demonstrates the enormous value of encouraging children to develop their own plans. A large-scale study was conducted of the research-based early childhood program Tools of the Mind, a key part of which involved pre-school and kindergarten children creating, with the aid of a teacher, individual "play plans." This plan-based curriculum was developed from groundbreaking neuropsychological research. In their plans, children as young as three draw pictures of themselves in their chosen role, practice writing out their plans, and then attempt to execute (and as necessary, adjust) their plans. The results are overwhelming: Only half the kindergartners in the non-Tools group scored "proficient" at their grade-level, while 97 percent of their peers in the Tools group scored "proficient." Additional testing of the program had demonstrated among the Tools groups increased IQ scores and significant improvement in behavior ratings. Award-winning journalists Po Bronson and Ashley Merryman conclude in Nurture Shock that through a plan-based curriculum "the child's brain learns how one symbol combines with multiple other symbols, akin to high-order abstract thinking."

From yet another perspective, Malcolm Gladwell has popularized the 10,000-hours rule for exceptional performance. As it turns out, this rule finds support in brain science. While early theories of the brain depicted it as unchangeable, we now know that due to the brain's plasticity it can strengthen and increase connections with practice, especially for youth. Consequently, if we want children to strengthen their executive functioning to achieve social and academic success, then they need to practice executive function skills, i.e., developing and executing plans.

Just this December at the 2013 Evolution of Psychotherapy Conference, Dr. Martin Seligman, the leader of the positive psychology field, referred to our species as "Homo Prospectus" ("the one who plans"), instead of "Homo Sapien" ("the one who knows"), emphasizing the profound importance of the skill of planning. Seligman asked the question: "Can we become better 'prospectors' and then become happier?"

Our blueprint for parenting should include plan-based tools for children to help them LEAD their futures in healthy and meaningful directions. We can't control all of the good and bad things that will happen to our children, but we can give them the tools they need to make their experiences, whether joyous or painful, opportunities for growth. Stay tuned, as I explore the many ways we can empower children to boost their executive function skills through plan-based practice.

More:
empowermentParenting child developmentParentsneuroscience
Newsletter Sign Up
Raise the kind of person you'd like to know
Subscribe to our parenting newsletter.
Successfully Subscribed!
Realness delivered to your inbox