I wrote the following piece for a writing contest (which I didn't win) about three years ago, and I've debated -- for a long time -- whether I wanted to share it or not. But October marked the three-year anniversary of my life without my dad on this earth. And I realized there are absolutely days I still feel this way. But this year, I didn't. This year, October 12th was a day of celebration in our family. We honored my brother's bride-to-be and looked forward to the future with joy, rather than back to the past with sadness. It was just as my dad would have wanted it to be, no question.

And that night, as my son was falling asleep, I noticed him cuddling up to the pillow that was my dad's, but hasn't smelled like him in years. I whispered, "Do you still think of Grandpa when you use that pillow?" His eyes remained softly closed, and a big smile filled his angelic, sleepy face. He gently nodded.

I was unprepared. Unprepared for the way my heart filled with love and my eyes filled with the soft, sentimental kind of tears... at last.

Usually, the sound of my children's laughter leaves me giddy with adoration. Usually. And today shouldn't have been any different. There was my little kindergartener -- whose brand new pants happen to be too short again, because he's bigger than I like to admit -- gasping for air as his grandpa tickled him silly. Though the corners of my mouth crept up watching them, I felt my eyes suddenly filling. Only the tears weren't the usual soft, sentimental kind, they were explosive and relentless.

Surprised by my reaction, I quickly ducked out of the room. How could I explain that while I adored watching a relationship grow in giggles, I was furious. Not at the moment that was, but at the moments that will never be.

Now that I think about it, I was really just a kid myself when I started to say goodbye to my dad seven years ago. Daddy's little girl playing grown up. All I wished was that the deadly cancer in his brain would be kind enough to let him meet his grandchild. Frankly, that grandchild was nothing but a passing thought at the time -- and with six months to live, it wasn't a very practical wish. But I wished it. And it came true. Then, a couple years later, I found myself wishing it again. And a couple years later, again. I was getting greedy, tempting fate.

But my dad seemed to have a deal worked out with God. He would suffer humiliating moments of physical weakness, sacrifice his memory and sleep away day after day after day if he could just live to know my three children. They both held up their end of the bargain.

When my first son was born, about a year after my dad's brain surgery, he was still fairly strong -- tickle monster strong. As his daughter turned into a mom, my role was simply to bring him and his grandchildren together, then stand back and watch. Watch as they laughed, sang and fell head over heels for each other. 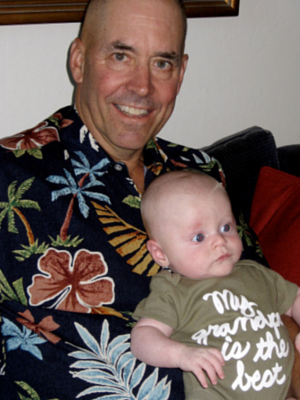 But over time, my dad slowly disappeared. By the time my second son was born a few years later, the tickle monster was gone, along with my dad's short-term memory, ability to walk steadily and our hope that he might regain any of himself that had been lost along the way. My firstborn was old enough to see the changes, to ask questions, to digest the answers.

And what did I do? I parented the heck out of my kids. I bought children's books about memory loss. I interviewed a grief counselor and practiced her tips for talking to kids about illness and death. I spoke honestly, with age-appropriate language. While I didn't want to be, I was prepared for the worst.

A few months after my baby girl was born, it was time to say goodbye. My dad smiled, patting her foot and mumbled, "Love you," before drifting off to sleep, never to say another word to me -- to her -- again.

As his daughter, I was devastated. As my kids' mom, I was prepared.

But since that day -- with the words and the books and the hugs -- I keep finding myself alarmingly unprepared.

Unprepared for the way my oldest came undone, sobbing in my arms as friends spoke with kindness and humor about the man we all loved. Unprepared to find him sleeping with my dad's pillow, because it still smelled like his grandpa. Unprepared for my middle child to "read" an inscription in a book, "Dear Baby Sister, This is from Grandpa... before he was sick and couldn't walk." Unprepared to be angry with my kids on a daily basis for crying about everything that's nothing at all, when I'm supposed to be keeping it together. Unprepared for my toddler's answer when I impatiently asked why he was crying yet again and he answered, "Because Grandpa died." Unprepared for the anguish that consumed me as I watched my father-in-law playing with my son. Unprepared for my baby girl's innocent laughter as I clung to her weeping.

I'm unprepared to be a mom who no longer has a dad. But that's who I am. So instead of looking to my dad for advice, I'm looking for signs of him as inspiration. In my oldest son's kindness. In my middle's mischievous side. In my baby girl's easy smile. And I'm holding on -- with all my love.

A version of this post originally appeared on Using Our Words.

Amy Heinz is a San Francisco Bay Area mom of three and the writer behind Using Our Words -- a parenting blog filled with lessons she's learned (usually the hard way), laughs she's enjoyed (mostly at her own expense), and tears she's shed (this mama's got heart). You can also find her on Facebook and Twitter.