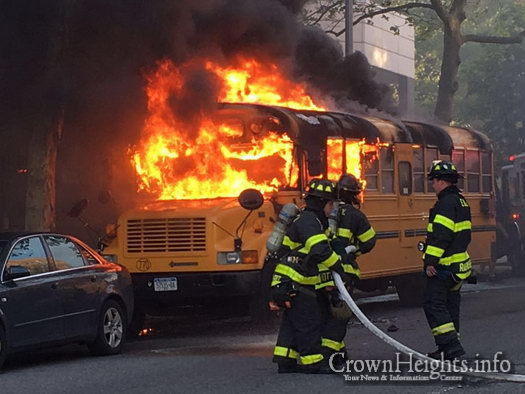 On Sunday May 8th, a group of African-American children set fire to a parked school bus in front of a Jewish elementary school in Crown Heights. The incident was caught on a surveillance camera. The New York Police Department arrested one the arsonists that same night and three more were arrested later in the week. Two of the boys are 14 years old, one is 12 and the fourth is 11.

The police initially charged the culprits with arson and criminal mischief, as hate crimes. The media later reported that the hate crime charges were dropped since there was insufficient evidence to prove that the crime was motivated by bias. This prompted an important debate on the perceived spike of anti-Semitic incidents in Crown Heights.

The arson charges will be tried in Family Court due to the young age of the offenders. Judges have huge discretion in Family Court and it likely won't make any difference in terms of sentencing or rehabilitation whether or not these kids are charged with conduct constituting a hate crime. Still, I question the rationale in charging an 11-year-old with a hate crime in the first place.

To be classified as a hate crime, an incident has to be motivated by prejudice or intolerance toward an individual's ethnicity, disability, color, religion or gender. Does an 11-year-old even have the intellectual or emotional maturity to commit a hate crime? We have all heard kids angrily yell at a parent or sibling "I hate you" or even "I want you to die". All fair minded adults would agree that the child doesn't mean or even understand what he or she is saying.

Ironically, in my experience, the New York Police Department avoids classifying attacks as hate crimes since it attracts unwanted media and political pressure. I recall several instances where hate crimes were committed but the police or District Attorney refused to classify it as such. This is why Jewish leaders sometimes rush to call attacks on Jewish institutions, or individuals, hate crimes. There is a distrust in the system that If we don't call it a hate crime then no one will.

It is undeniable that this was a very serious incident. Lighting fire to a school bus is a despicable act. Had the bus exploded, there would have been fatalities. The footage shows the kids entering the bus and lighting the fire from inside, putting themselves in genuine danger as well. But instead of focusing on whether the word "hate crime" should be attached to the criminal complaint, we should be asking what went wrong with society that children, even 10 and 11-year-old, could be so oblivious to the dangers and consequences of torching a school bus? Is there an atmosphere at school that encouraged anti-semitism or vandalism? And most importantly, what educational initiatives can we launch to better address the issue of violence and hate perpetrated by young children?

While the owner of the bus can seek damages from each parents of up to $5,000 per kid, it would be a costly and burdensome process. The parents should pay for the damages to the bus because it is the right thing to do. When parents teach by example that can be more rehabilitating for their kids than any sentence or punishment.

Yaacov Behrman is the director of a substance abuse prevention program in Crown Heights.