Yet another teen’s parents have chosen a public humiliation as punishment for their child. Last Wednesday, 15-year-old Jasmine (whose full name has been withheld) was made to stand on a busy Florida street corner wearing a sign, according to WESH 2 News. 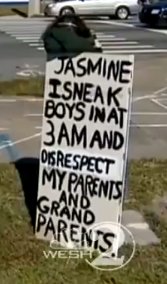 ("I sneak boys in at 3 a.m. and disrespect my parents and grandparents.")

Jasmine's mother, Melinda, and stepfather, Mike, told the news station that their daughter has been misbehaving -- lying, drinking, sneaking out –- and that they have tried conventional discipline methods in the past.

"I've taken all her toys or her electronics away; her phone, no privileges on the TV or computer and still she just laughs about it," Melinda said.

Throughout the WESH 2 News interview, Jasmine hid her face but was clearly in tears when asked if this punishment would make her rethink her behavior and nodded her head yes in response.

Melinda and Mike are not the first parents make news for shaming a child in this way. In June, a mom of two in Indiana forced her children to wear signs when they were "disrespectful." That same month, a 12-year-old in Maryland strolled on a sidewalk with a sign because he forgot to call his parents (for half an hour). Often, parents report that the public humiliation “worked” and taught their kids a lesson.

In Jasmine’s case, if her behavior doesn’t improve, Mike and Melinda have they plan to shame her in other more extreme ways such as forcing the 15-year-old to shave her head.

However, experts warn that humiliation is not an effective or appropriate way to discipline a child, under any circumstances. When HuffPost senior columnist, Lisa Belkin, reported on the sign-wearing trend in April, Alfie Kohn, author of "Unconditional Parenting: Moving From Rewards and Punishments to Love and Reason," explained that this type of punishment could do more harm than good because it postions the parent as an enforcer to avoid, rather than an ally to trust:

"It's not just that humiliating people, of any age, is a nasty and disrespectful way of treating them; it's that humiliation, like other forms of punishment, is counterproductive," Kohn said in an interview.

Andy Grogan-Kaylor, an associate professor of social work at the University of Michigan, agrees that public punishment serves the opposite of the desired effect. "The research is pretty clear that it's never appropriate to shame a child, or to make a child feel degraded or diminished ... Positive things have a much more powerful effect on shaping behavior than any punishment," he told MyHealthNewsDaily.

Kids Who Have Worn Signs As Punishment