Because of a work deadline, Jeremy Collins, a 36-year-old artist and father of two, didn't sit down to read about the Sandy Hook Elementary School shooting until 9 p.m. Friday. Full of tears, he immediately began to draw -- sketching a single figure, crumpled in a chair, comforted by a line of faceless people.

"Being a parent, and especially a parent of someone that exact age … I placed [my son's] face in that room," Collins said. "I placed the faces of his friends in that room."

"My sketch," he said. "Was a response that I couldn't keep inside." 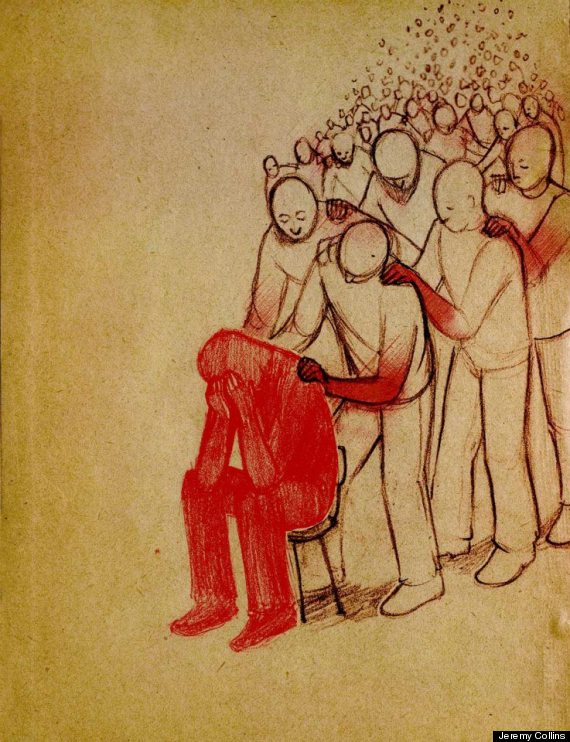 Though the school shootings in Newtown, Conn., have resonated universally, parents across the country have been among the most emotionally affected. In his first address to the nation after the tragedy, President Barack Obama gave voice to their feelings, saying he had responded to news of the shooting first and foremost as a father and was sure every parent would share his "overwhelming grief."

"As a parent, this hits at your deepest fear, which is 'Oh my goodness, my child is vulnerable in an environment where I didn't expect them to be vulnerable, and I can't protect them'," said John Fairbank, co-director of the national center for child traumatic stress at Duke University Medical Center. "I'm a parent myself and I can tell you, the last three days have been pretty rough."

Few parents have outlets as powerful as Collins'. (Prints of his drawing, which has received a significant response, are available for sale and 100 percent of the proceeds will go to families of the victims.) Betsy Brown Braun, a child development and behavior specialist and parent educator and a HuffPost blogger said that every person processes information differently -- some are talkers; others "bury their heads" -- and stressed the importance of parents exploring what works best for them.

"Knowing that children absorb our affect and our tone, it's of critical importance that parents take care of themselves," she said. "For some people, it's talking to their partner, for some people it might be reading everything and mulling it over, for some people like me, there's a tremendous need to talk with colleagues."

Agata Rocka, a 28-year-old from North Carolina who has an 18-month-old son, said that hearing about the shooting brought back fears she had not felt since the first shaky weeks of new parenthood.

"It hit me so hard, I could not stop crying," Rocka said in an email to HuffPost. "All I wanted to do was run from my work to get [my son] Mati and just hold him." To help cope, she has turned to something simple and fun: dancing with her son. Rocka blasts Pandora's toddler station and lets herself go, not just because it makes her son happy, but because she needs to hear him laugh in order to keep herself going.

Carissa Kapcar, mother to an 8-, 5- and 2-year-old, has stopped frequently in the past few days to read quotes about courage from anywhere she can find them, be it the Bible or movies. Though the practice has provided some relief, she is struggling through the five stages of grief, including anger.

"I'm pissed off that I have to be giving myself these pep talks and looking up quotes on courage just to take my children to school," Kapcar admitted.

Another mother, who wished to remain anonymous, told HuffPost she met with parents in her neighborhood to discuss what, if anything, they can do. They have talked about upping their schools' budgets for mental health and security guards. "It's making us feel like we're doing something," she said. Otherwise, what she feels is fear.

"It was terrifying!" she said of dropping her kids off at school. "It was terrible. I had to pretend like nothing was going on, but I'm sure they felt something."

Getting children back to their routines can be wrenching, but Steven Meyers, a professor of psychology at Roosevelt University and a Chicago-based clinical psychologist, said it is one of the best things parents can do both for themselves and their children.

Parents can reintroduce their children gradually, he said, but it is a bad idea to keep them from their normal routine for more than a few days in situations where there is no safety risk: "Often, we need to experience those situations we're afraid of in order to resolve our worries," said Meyers.

Overall, parents must be "thoughtful self-diagnosticians" he said, meaning they must be responsible for recognizing when normal fear and sadness have morphed into something more serious. That may be signaled by an inability to sleep or stop thinking about the tragedy, as well as changes in eating and day-to-day behavior.

The good news, Fairbank said, is that many parents should begin to feel "back to normal" in a few days or weeks, and after three months, the majority should be pretty much back to how they felt before the shooting. For now, he said, the simplest actions are often the most helpful: Limit news consumption, seek comfort from family and friends and give yourself permission to both grieve and feel joy when it's warranted.

"This event is unprecedented," he said. "We're all figuring it out together."