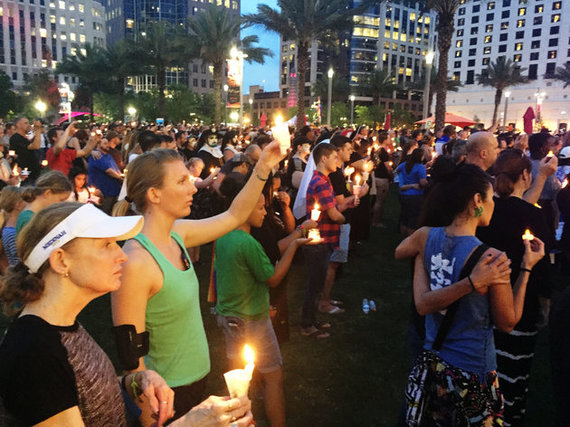 He didn't say much, but he wasted no time. The day after Sediqque M's son committed a brutal massacre at an Orlando nightclub, leaving an astounding 49 people dead, the father of the murderer immediately surfaced and apologized:

I am really sorry and have expressed this to the people of the United States, especially in this holy month of Ramadan. What he has done has shocked me ... I ask God for help and guidance.

Those people who lost their loved ones, they are my family. I am as sad and as mad as you guys are. I'm very, very mad.

I don't know anything about the man's politics, what kind of father he was, if he made other inflammatory statements, took questionable actions. The man deserves credit, though, for immediately coming forward. It's not how the parents of rampage shooters used to act.

What will the reaction be from surviving victims, or those struggling to survive devastating injuries? What about the reaction from the scores of grieving family members of those young men and women whose lives his son tragically cut short?

Some will simply ignore him as inconsequential and meaningless as they cope with despair. Others may react with anger. Still others might find some quiet measure of appreciation, if not now, eventually. The victims, the survivors, in fact the world, cries out with one simple question: Why? What did my son or daughter, my sister or brother, do to deserve this? Why did your son take them away from me? What were their last words? What made your son act in this barbaric fashion?

One thing Sediqque's expression of sorrow, shock and anger was not: it was not silence. Silence was the default position taken by the parents of rampaging murderers in the past. The disbelief expressed by Sediqque is common. It is common that parents of rampagers cannot fathom their children could be capable of the unimaginable carnage they unleash. Parents are blindsided by the event and are simultaneously engulfed with an international media tidal wave. Police in arrive in SWAT gear and forcibly remove them from their homes, interrogate them as suspects: what did they know about their children's plans and how did they obtain their weapons? The media camp out on their lawns, visit their employers, family members and friends. The images of their children and themselves are plastered on the television, newspapers and web and in infamy.

If their child is dead, as if so often the case, the parents, too, are in mourning. They have to figure out what to do with the dead body. Funerals and burials are difficult, or impossible, in fear of vandalism. The parents are blamed, vilified, and hated. They receive death threats.

Expecting lawsuits and even possible arrest, parents huddle with lawyers. Lawyers advise silence. Statements made could be used against parents in big multimillion dollar lawsuits, which in the United States will, no doubt follow. Statements might be used by criminal prosecutors looking to charge somebody, anybody, with "aiding and abetting," accomplice criminal liability, or failure to prevent a crime, something called "misprision." For lawyers, silence helps shield clients.

Parental apologies seem to have started in the age of Columbine. Prior to Columbine, parents often maintained silence, as did the parents of the 14-year-old boy who, in 1997 killed 3 classmates in a school prayer circle at Heath High School in West Paducah, Kentucky. And in the late 1999 when the parents of mass shooters made a statement, it came after a few days and great deliberation with attorneys. The statements were typically written and released by parents' attorneys.

An example is the brief and statement released by the lawyer for the parents of one of the Columbine High School murderers:

Wayne and Kathy...have been devastated by what their son...did.'' They continue to grieve for all of the victims and their families. "Hopefully, there will come a time when they feel they are ready to speak publicly about their son and the horrible acts that he committed. But now is just not that time.

Sediqque's brief but immediate apology is more common now. It's how most parents now react. In 2013, for example, a mother held an impromptu press conference in her Brooklyn, N.Y. apartment the day after her son murdered twelve innocent people at the Navy Yard in Washington D.C. She stood in her living room and with clergy standing beside her, read a brief apology, concluding that she was now was glad in her son's death he could "no longer do harm to anyone." Her words were preferable to the deafening silence of bygone eras. There are countless examples of the newer trend.

A second development, much rarer but even more remarkable, is that parents of shooters conducting private meetings with parents of victims. One such meeting occurred in 2013 following the Sandy Hook elementary school tragedy where the father of the shooter met privately with grieving parents of one of his six-year-old victims. Another such meeting between parents occurred between two fathers in 2014 near Los Angeles, California. The meetings offer the slightest possibility of making sense of the senseless.

Experts like psychiatrist Aaron Lazare say apologies are "a validation of another person's feelings, intuition, and perception," and, when sincere, are an important component of the healing process. The apology, he wrote in 2004 (On Apology), "is a method of social healing that has grown in importance as our way of living together on this planet undergoes radical change." Radical change, indeed.

The meetings, the prompt expressions of apology and remorse like the one uttered by Sediqque don't bring back the dead. But they just might help the living live another day.