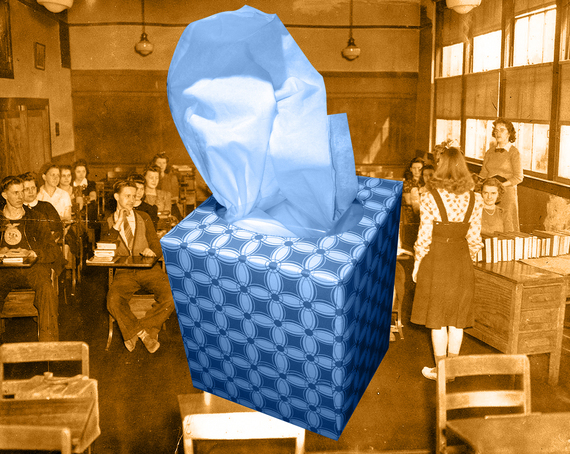 Many university students are afraid of some pretty rough bullies: their parents. For years now, I've had a box of tissues permanently on hand in my office for when students come to see me. Often, their parents have forbidden them to study what they want and have pushed them into studying what the parents want, such as marketing instead of music and business instead of game design. "You can't eat your dessert first, kids. You must earn it by eating your vegetables first."

Helicopter parents -- parents who micromanage their kids' every decision -- strong-arm their adult children into being "mini-mes." When they were young, parents dreamed of getting a "good job," meaning one with high pay, good benefits and opportunities for advancement. Happiness wasn't a priority, but a perk. Financial security was the vegetable that earned them the dessert of happiness.

Parents mean well and do these things because they love their kids and want them to get along in life, and they believe that choosing a financially "stable" job is the way to ensure that. Some students, particularly those who are unsure of what they want to do in life, buy into the idea that their parents know best, so they follow the plan that their folks have mapped out for them. Nevertheless, too many of them wind up in my office, miserable and with tissues in hand. When push comes to shove, these students define success the "no-no" way: being happy in life and work.

We've all heard the saying that money can't buy happiness, but in many cases, happiness can buy money. If a person loves what they do, they're more likely to excel in it, which can lead to financial rewards, and conversely, a person doing a job without any passion for it probably won't invest much sweat equity in it. A career built on shaky ground isn't likely to stand the test of time.

So, who doesn't want a good job? "My kid, that's who. He wants to make video games!" Wrong. He wants financial security, too. He's not an idiot. But he just wants his "good job" to be making video games and not doing tax law or selling stocks. Over-involved parents view their children as career-impaired drunk drivers who are going to steer their lives straight into the Breakdown Ditch of Failure. So, heroically, they muscle the decision wheel away from them and head straight toward good old Successland, where they grew up. As Chuck Palahniuk, author of Fight Club says, "First your parents, they give you your life, but then they try to give you their life."

But parental meddling is costing kids a whole lot more than just lost dreams. More and more university students are feeling anxious, depressed and dissatisfied than ever before and this is due, in no small part, to the message many of their parents have been pounding them with: They can't be trusted to govern their own lives. According to a study in the Journal of Child and Family Studies led by associate professor of psychology at the University of Mary Washington, Holly Schiffrin, "Parents are sending an unintentional message to their children that they are not competent." Time notes that the study lists three elements that must be present in people's lives for them to be happy: feeling autonomous, competent and connected to other people. Clearly, helicopter parents are depriving their kids of the first two, and I don't think that being joined at the hip to one's parents qualifies as being "connected to other people," so nix the third one, too.

Most of my students love and respect their parents but are terrified to confront them or go against their wishes, which is the power dynamic the parents have set up in their family. They're also terrified of disappointing them. The students who come to me... basically a stranger... feel desperate, lost and hopeless. (Wouldn't it be nice if they could go to their own parents?) They feel they are being forced into a life they don't want and never will and worse, one that will strangle their uniqueness. Jim Morrison, lead singer of the "Doors," said it best, "The most loving parents and relatives commit murder with smiles on their faces. They force us to destroy the person we really are: a subtle kind of murder."

Some of my students who have graduated feel tremendous pressure to give their parents an immediate return on their investment, and I've seen them beat themselves up if they aren't stepping directly into that dream job they spent four years studying for when they graduate. They feel like failures because they see graduation as the official starting gate in life's race to success. It's hard for a young person to win a horserace they don't even want to run in the first place.

But, life is only a horserace if one chooses to see it that way, something I highly discourage when I speak to young people. The reality is that life unfolds at its own pace and in its own way based on factors a person can control and many that they can't. Having a wonderful life isn't about chasing a job and salary on some distant horizon; it's about the richness of the journey along the way. Truly happy people never even notice the horizon; they're too engaged in the exciting life going on around them. And the kicker is, if they work hard and do good work -- what's on the horizon will come to them.

Helicopter parents, some advice: First the Don'ts: Don't bully your kids to do what you want by threatening to revoke money, love or whatever. Don't insist that they "owe" you for paying for their upbringing or for college. The first is your job and the second is your choice. Pay for their school or not, but let them decide who they want to be in life, and if you don't agree, well that's your problem. Don't ever call a teacher or your kid's prospective employer and don't go on a job interview with them! I mean, really? Don't meddle in their lives while they're in school or after they graduate, unless they ask. Now the Dos: Do respect and trust your kids. They'll rise to the occasion. Help them find a way to be successful doing what they want, whenever that is, which may be years. Support them when they fail without saying "I told you so." Get involved if it involves you. If they can't pay off their student loans, help, but don't demean them for it and don't order them around. Keep going with this and up your own list, with your child.

Oh, and one more "don't." Don't be too hard on them if they seem incapable of thinking for themselves. You supported this dynamic all their lives. Deep wounds take time to heal.

(Coming next: "College Students: How To Combat Your Helicopter Parents Who Are Micromanaging Your Lives")

More:
helicopter parentingmicromanaging ParentsStresshelicopter parents
Newsletter Sign Up
Raise the kind of person you'd like to know
Subscribe to our parenting newsletter.
Successfully Subscribed!
Realness delivered to your inbox