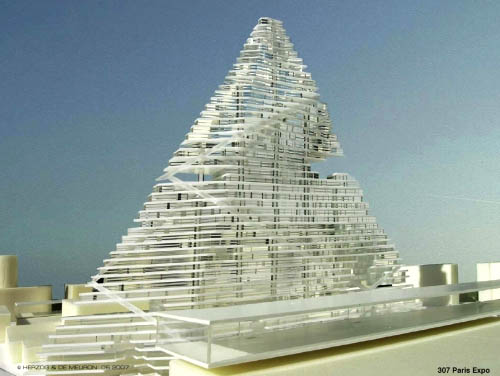 It's the most popular city in the world -- 28 million visitors a year, bringing in 84 billion euros to the city's coffers.

Yet this, apparently, is not good enough for Bertrand Delanoë, the Socialist mayor of Paris. Nor for François Hollande, the Socialist president of France.

Both men are promoting a plan that would change this "City of Light" into a city of shadow -- a city ringed with possibly a dozen skyscrapers, each one more bizarre than the last.

Originally called Le Grand Paris, and enthusiastically endorsed by former president Nicolas Sarkozy, the idea was to construct huge buildings outside the city limits, as defined by the Periphèrique (the outer ring road). Thus, the city's 11-story limit on height would not be challenged. The plan also envisaged new rail lines that would bring people in from the suburbs to work in these buildings, which were conceived as strictly commercial, not residential.

This grandiose project, running headlong into the economic crisis, eventually got watered down. Today, the promoters are planning to build three skyscrapers that will be built within the city limits. And they plan to follow up these three with at least three more. SOS Paris, an organization founded in 1973 to fight French president Georges Pompidou's plan to build highways along the Seine, is the most outspoken opponent of the projects.

The plan, as they see it, is sheer folly -- urban hubris run amok. First of all, Paris does not need more office buildings. The cluster of office towers at La Défense, begun 40 years ago on the edge of the city, is falling into disuse as many businesses are leaving. What Paris needs is residential construction -- there is an appalling shortage of housing.

But that's not where the glamour lies. Many cities today, from St. Petersburg to Dubai, think that by erecting weird new skyscrapers they will enhance their global image. City planners and -- sadly to say -- architects, too, tend to denigrate the old and the traditional, and promote instead what is brazenly nonconformist. It's fine to be culturally avant-garde (buying art, composing music), but living in a city is serious business and should not be the subject of wild experimentation. Someone has even suggested a Hippocratic oath for urban planners: Thou shalt do no harm.

There is much harm to be done to Paris if these new building projects go through. One, in the 15th arrondisement, is a 50-story glass triangle designed by the reputable Swiss firm, Herzog & de Meuron. It is ludicrous to think that they may have simply magnified I. M. Pei's glass pyramid at the Louvre.... but the suspicion lingers. They claim that their Tour Triangle would not cast a large shadow on the neighborhood, but it would definitely require the demolition of half of Paris' main convention and exhibition center at the Porte de Versailes.

The second project, planned for the 17th arrondissement, is a boxy, three-tiered, 48-story courthouse, designed by the Italian architect, Renzo Piano, who sees it as "a setting conducive to the exercise of Justice." (Opponents call it a Tower of Babel.) It would replace the venerable Palais de Justice on the Ile de la Cité. Understandably, the entire legal community is opposed to this project, so there is a good chance that it will be dropped.

The third project is already underway in the 13th arrondissement, in the neighborhood behind the Gare d'Austerlitz and the Bibliothèque Mitterrand. The site is euphemistically named Paris Rive Gauche. It is indeed on the left bank of the Seine, but there the resemblance ends. Developers are throwing up a haphazard assortment of residential and commercial buildings that range from bland to ugly. And although they boast that there is new office space for 50,000 people, there will be housing for only 15,000.

The rationale for these new projects, and the ones that may follow, is seriously flawed. When it comes to architecture, bigger is not better. It has been shown that skyscrapers are not more energy-efficient. Also, they are extremely difficult to evacuate in case of a fire or other emergency. And as they draw large numbers of people into a single high-rise building (where an estimated 20% of their time is spent in elevators!), the place of work becomes an artificial neighborhood, devoid of authentic urban activity.

Messrs. Hollande and Delanoë warn that Paris will become "a museum city" if these skyscrapers are not built, and that foreign visitors and foreign investment will dwindle. In fact, Paris will probably be less desirable if its traditional attractions are (literally) overshadowed by modern monstrosities.