Like so many in my Facebook circle, I was horrified by what happened in Paris Friday night. But I'm ashamed to say that when I learned of and wrote about the attacks in Paris, I had no idea that an entire day before they occurred, two suicide bombers attacked a crowded shopping area in the city of Beirut, Lebanon, killing 43 people and injuring 240 more.

I had no idea that on the morning of the Paris attacks, a suicide bomber killed 19 people and injured almost 40 others who were all attending a funeral in Baghdad, Iraq. This is what I get for relying on Facebook for almost all of my breaking news, a habit I clearly need to change.

Where is the button that lets me change my Facebook profile to stand in solidarity with them?

I judge no one here except myself.

I completely understand why America's collective outrage and grief is so much greater over the Paris attacks than it is over the hundreds of other terror attacks that have happened in non-Western countries just since this year began. Many of us, including my husband and me, have traveled to Paris. Paris is familiar, iconic, Western, and largely white. It's easy for me to picture myself in the shoes of any one of those people victimized by terror last night -- cheering on my national team in a large stadium, enjoying a meal in my local favorite restaurant, dancing to a favorite band inside a loud club.

But why should it be so much harder for me to picture myself in the shoes of a person doing her weekly shopping at her local bakery? Or attending the funeral of a beloved? Or just trying to live my life from day to day without constant fear?

Is it simply because some of those people are brown or black? Is it because they live in parts of the world that feel strange, unfamiliar and too far away to feel threatening to me? Is it because their experiences with terror are so tragically commonplace that it's nearly impossible for me to imagine myself in their shoes?

I think it's probably all of these things and more. But if I am who I say I am, if I believe that connection is the reason that we are here, that our most important role as humans is to bear witness to one another's grief and pain, then the boundaries of my empathy must extend beyond the borders of the white Western world. I must find a way to put myself into the shoes not only of the Parisian, but of the Syrian, the Iraqi, the Nigerian, the Kenyan, the Afghani, the Pakistani.

And of course, I must find a way to put myself into the shoes of the African-American, who experiences terror here within my own country on a daily basis.

I am naïve. I am sheltered. I am privileged.

My understanding of these huge problems in the world is limited. But when it feels, as it so often does, like I am powerless to do much else, I understand the power of bearing witness, of empathy, of solidarity. I can start there. 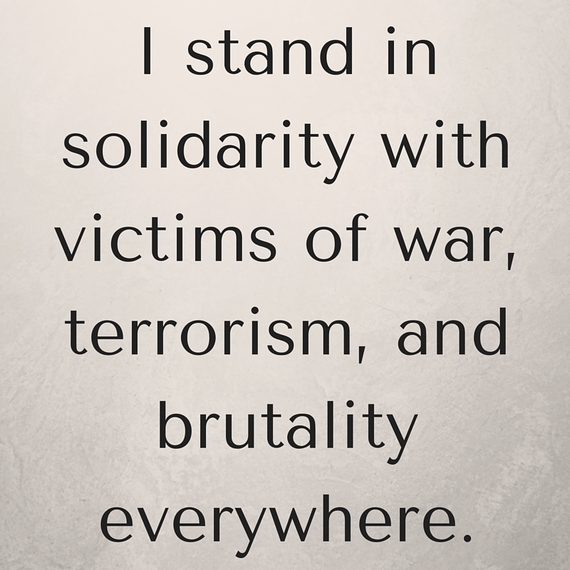 Mandy Hitchcock is a bereaved mother, cancer survivor, and recovering lawyer. She lives with her husband and two living children in Carrboro, North Carolina, where she writes and practices just a bit of law on the side. You can follow her on Facebook and Twitter, and read more at mandyhitchcock.com.