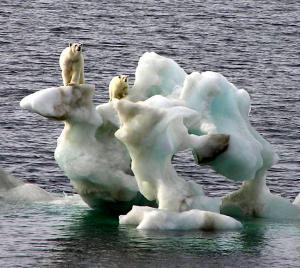 The challenge of climate change is widely held to be an obvious instance of The Tragedy of the Commons, Garrett Hardin's argument that individuals pursuing their self-interest will produce an outcome that is sub-optimal for everyone, including themselves. Overgrazing of the commons occurs in the absence of an effective way to collectively limit the number of cattle put out to pasture. Restraint by one herdsman simply creates an opportunity for others to do the opposite. The result is restraint by no one.

Optimism about the recent climate agreement in Paris seems to ignore the logic of the Commons. Not only do country pledges to limit carbon output fall short of what would be needed to limit global warming to 2 degrees Celsius over pre-industrial levels, but there is no mechanism in place to hold countries to their pledges. This looks like a case in which agreement between the herdsmen is only won by allowing overgrazing to occur.

Still, as long as the agreement results in some restraint over business as usual surely that is a virtue. And when it comes to climate, business as usual is projected to produce a likely increase of 3.7 degrees Celsius by the end of the century and 8 degrees Celsius by the year 2300 according to the most report of the IPCC. But the problem is that every smart herdsman has an incentive to pledge restraint and then take advantage of others who follow suit.

So why isn't the Paris agreement doomed?

But wait! Is the logic of the Commons undermined by any of this? Surely it does not demand that everyone march to its drum beat. As long as some people do, and their needs outstrip available resources, the problem will arise. One farmer stepping outside this logic does not change this. Nor do many. As long as there are remaining farmers with enough resources to buy more and more cows, enough stay in place to create the problem, irrespective of the actions of others, and the logic of the Commons still holds us in its grip.

Suppose most farmers follow the leader but some do not. But suppose the holdouts do not have enough resources to create the problem. They will show no restraint but their lack of restraint won't be enough to create the Hardin's outcome. Why might this be? A lemon tree stands on the village green. Villagers are asked to take no more than their fair share. Most do but some do not.

What would it take for such a partial cooperation to obtain in the aftermath of Paris? In the short term, enough countries need to cooperate so that the benefits of their restraining carbon output outweigh the costs to them even in the face of unrestrained output by others. In this sense, size matters - on both sides of the ledger. For the cost-benefit calculus for those cooperating will require them to increase their level of restraint to offset the unwillingness of the non-cooperators to do the same.

That said, in the long run, size can also matter in a different sense. If the cooperating countries constitute a large enough slice of the export market of countries that choose not to cooperate, reforming the WTO to allow the imposition of tariffs could be used to move the world to full cooperation. (Such punitive tariffs were included in the American Clean Energy and Security Act of 2009 which was approved by the House of Representatives but not in the Senate.)

That partial cooperation might be stable is surprising at first blush, even when the damage of non-compliance is limited. At the level of the day to day, it offends cannons of fairness. If you won't show restraint, why should I! Of course one can witness the destructive downward spiral that this sentiment can lead to in daily life as much as in international affairs. Whether it is road rage or bar fights, when one party's lack of restraint is mirrored by another, it can provoke the first to escalate their behavior and we are off to the races. Blocking things from spiraling out of control means allowing oneself to be taken advantage of. As such, the prospects for the Paris agreement may hinge on how willing the community of nations that follow through on their commitments are willing to be taken advantage of by those that do not. But perhaps more importantly, it will also depend on how political leaders who lead countries that allow themselves to be taken advantage of fare with their own electorate.