Designing a long-term strategy and implementing effective policies to successfully deal with radical Islam on Western soil can no longer be delayed. In the immediate future, strong rule of law nations must deal with enemies within our midst which are facilitating:

In each of these areas, the Balkan region and the perilous Balkan Route continue to play a major role. 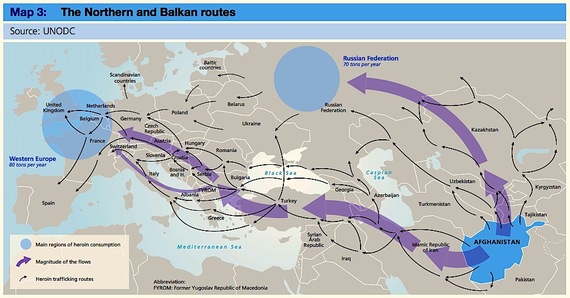 Radical Islamists brutally killed 17 individuals in the twin Paris attacks. The UK's Telegraph reported on January 11 that the Paris state prosecutors' office believed that firearms used by Charlie Hebdo attackers likely came from the Balkans: "Police estimates suggest that there are over 4,000 military-grade weapons from the former Yugoslavia in France." French Ambassador to the US Gerard Araud recapitulated with Bret Baier at Fox News' Washington, DC, studios on January 14, "Now, weapons in Europe are coming from the Balkans - lots of Kalashnikovs."

The Balkan Route originates in Afghanistan, where 75% of the world opium is produced (and trafficked via Iran, Turkey, and the countries of the Balkans to Western Europe).

In 2006, US Embassy cable stated, "Heroin from the Middle East transits Albania and Kosovo, crossing Montenegro before being transported further into Western Europe."

In June 2014, the Council of Europe Committee of Experts on the Evaluation of Anti-Money Laundering Measures and the Financing of Terrorism (MONEYVAL) issued the statement of concern regarding deficiencies in the anti-money laundering and combating the financing of terrorism (AML/CFT) regime in Bosnia and Herzegovina - placing it on the watch list together with North Korea and Iran.

On January 11, 2015, an AP report stated, "...[I]t is relatively easy for terrorists with underworld connections to obtain heavy weapons on the black market, particularly in the Balkan countries of Bosnia, Serbia and Croatia."

EUROPOL's Organised Crime Threat Assessment from 2011, reported on military grade arms which are trafficked from the Western Balkans and pose the EU's internal security threat, "The figure of 4 million unregistered illegal war firearms in the Balkans is well-known and remains deeply worrying."

Croatia was selling arms to Syria via Jordan in 2013. The unanswered questions remained: Where did all these arms come from, to whom were they sold, and, who got the proceeds from the sales?

A relevant US Embassy cable from 2007 reported: " ... several groups in Montenegro that deal mainly in drugs and arms smuggling are connected with criminals from neighboring countries, Western Europe and South America."

Although we assume that the Balkan Route operations are driven primarily by financial gain and radical Islam by ideology, in the areas of arms and drugs trafficking, the distinction between organized crime, mafia states, terrorism financing and radical Islam becomes blurred. 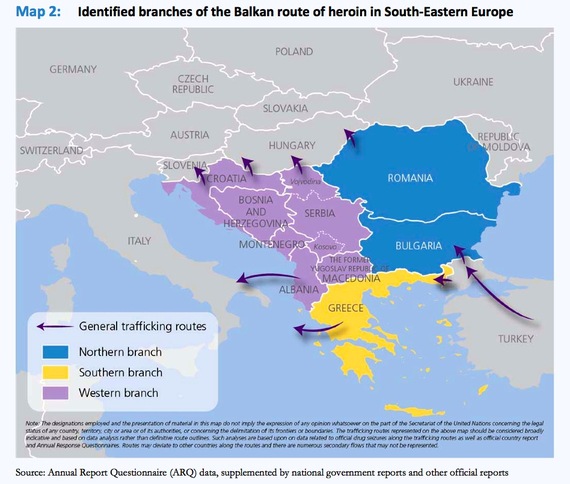 With the Balkan Route operators able to cross the borders and maneuver unobstructed, the same porousness of the Balkan borders allow radical Islamists to use land routes to travel from the Middle East to Europe. They may even get an official passport en route.

In the arrest of several Balkan criminals in Spain in February 2012, each of them possessed official Croatian passport. Further investigations led directly to Croatia's Ministry of Interior and a record of illegal sale of passports since 2006. This corruption has emboldened Balkan criminals to run an international criminal enterprise and the Balkan Cocaine Ring with direct access to the EU. No senior level official was held responsible in Croatia. Tomislav Karamarko who was at the helm of Croatia's Ministry of Interior from 2008 to 2011, and formerly senior official in intelligence structures, is now the head of Croatia's HDZ political party.

Today, organized crime coexists with political corruption in the Balkans, and what allows both to flourish is the absence of the rule of law, parlous state of the judiciaries and the significant money laundering facilitated by Western financial institutions, primarily Austria's and Liechtenstein's. Corrupt political establishments in the Balkans control the judiciary, intelligence, police, economy and the media, and have ties to organized crime.

Why did NATO allow unreformed countries of Albania and Croatia into a club of "rule of law" nations in 2009 and Romania and Bulgaria in 2004? Despite Adriatic Institute's warnings about Croatia, the EU closed its eyes to organized crime and colossal corruption in Croatia. Croatia prematurely became a NATO member and consequently an EU member without having the foundations of the rule of law and an independent judiciary.

In his book, "To End a War", the late Richard Holbrook, an author and US diplomat, who was involved in brokering the Balkan peace deal in 1995, clearly understood the realities on the ground when he stated:

"Yugoslavia's tragedy was not foreordained. It was the product of bad, even criminal, political leaders who encouraged ethnic confrontation for personal, political, and financial gain. Rather than tackle the concrete problems of governance in post-Tito era, they led their people into war."

Today, the same breed of "bad, even criminal political leaders" of the Balkans and money launderers in the West could care less about radical Islamism, Western values, the rule of law, liberty and freedom of speech as long as they can protect their amassed illicit enrichment and gain personal, political and financial gain.