One core narrative of the European Union goes like this: Whenever there is a crisis, the union will emerge from it even stronger. This narrative was invoked during the sovereign debt crisis, followed by the Greek debacle. It is being invoked as the refugee influx continues to swell. And now it is already being trotted out again in the wake of the terror attacks in Paris. But this narrative is wrong.   If anything, the experience of recent years has revealed the incapacity of European institutions to respond effectively in any crisis. Without the legitimacy that comes from the direct democratic involvement of its citizens, European institutions lack sufficient power and leadership to take meaningful action. Since collective initiative is stifled by the need for agreement among all members, each country acts for itself based on domestic politics. But each country is too small on the world stage to make a difference. As a result, the European Union dwells in a no-man's land without a defining mandate to govern its 600 million citizens.

Instead of nations rallying together to move forward, each successive calamity has further eroded the European project. The recent Paris attacks and the related issue of open borders under the Schengen Agreement continue this trend.

An inventory of failed responses illustrates the problem:

After the collapse of the Lehman Brothers in 2008, the fallout of the American debt bubble spread to European soil, ultimately leading to a showdown with Greece this summer that put the very idea of a currency union in jeopardy. If Greece were to leave the euro, the concern was what would happen when larger economies such as Italy, began to struggle. It was clear from the beginning of this single currency endeavor that monetary policies would only work in an arrangement that provides common fiscal and debt policy. Individual nation-states, however, kept repeating their mantra of "no bailout," only for the European Central Bank in the end to grant Greece a debt haircut. This conflict showed the outside observer that tensions among the member states paralyzed an effective response delivered with dispatch. Has Europe really helped Greece? Europe has itself been stuck in a near recession since 2008, while most of the world has recovered.

The 2011 meltdown at the Fukushima facility in Japan again reminded us of the dangers of nuclear energy. In the panicky aftermath, Angela Merkel revoked her own party's decision to keep this energy source on the market longer than originally agreed upon. Her about-face, the so-called Energiewende, took Germany's European partners and friends by surprise. France is not considering getting rid of nuclear power while Italy and Poland take different stances than the Germans. On an economically integrated continent, where one can travel from Berlin to London, Paris, Warsaw, Rome or Madrid in less than four hours, having different energy policies simply doesn't make any sense.

In the Russian-Ukrainian conflict, the European Union member countries have been unable to agree on a common strategy. Germany and France alone ultimately joined forces to prevent the situation from completely escalating. The United Kingdom, however, once a player in  the foreign policy deliberations of Europe, was completely absent from the negotiating table. Eastern European countries have, for a number of good reasons, their own special precautions when it comes to Russia. Since the early '90s, the EU has tried to establish the mechanism for a common foreign policy by creating a special office -- the High Representative of the Union for Foreign Affairs and Security Policy -- and an accompanying administrative body. So far, this office has not succeeded in formulating a pan-European approach to the continent's policies. In the end, the EU has not helped the Ukraine in its time of need, allowing Putin to take advantage of the weak nation.

The influx of more than 800,000 Syrian and Iraqi refugees this year coming to the Europe through the Balkans and across the Mediterranean met a barely prepared European Union. While Germany, Austria and Sweden took the vast majority of this year's refugees, the United Kingdom announced it would take in only a few thousand while Poland signaled its preference to admit only Christian refugees. On the verge of collapse, countries in the Balkans closed borders, a move followed at least in part in Germany and Sweden. The negotiated redistribution of 160,000 refugees is a farce. There is no solidarity whatsoever left in the refugee crisis. Instead, there is an almost open hostility among the European "partners." Here, too, we see single-nation reactions with nothing coordinated on a European scale.

As France has twice been the victim of Islamist terrorism this year, the reaction of France's NATO Allies -- including partners and friends in the European Union -- will be crucial. French President François Hollande declared war on the self-proclaimed Islamic State, which has claimed responsibility for the recent attacks in Paris. Deeply moved, German Chancellor Angela Merkel promised her tormented neighbor all possible assistance and solidarity. Does her pledge mean there will be joint counter-terrorism actions in Europe? Does solidarity include joining France in war against ISIS in Syria? Days after the deadly attacks in Paris, the German government has still avoided answering that latter question. One issue has been insufficient sharing of intelligence among European partners. As the discovery of the Belgian headquarters of the Paris attacks reveals, ISIS is intentionally taking advantage of a fractured Europe. Where is Europe acting as one and for all its members? 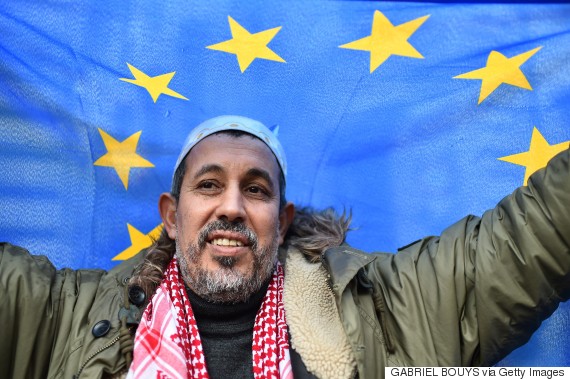 A man waves an EU flag during a demonstration of Muslims called "Not In my Name" to speak out against terrorism a week after Paris attacks. GABRIEL BOUYS/AFP/Getty Images.

None of these five crises the European Union has faced in the last year have been resolved, but rather postponed or temporarily shelved through half-baked compromises. With no problem solved, hostilities are increasing among the nominal partners of the EU.   The idea that crisis will bring the continent together no longer rings true in Europe. The only way the EU will work is if it, like any other well-functioning federation, has a strong center. For that to happen, individual nations need to give up a measure of domestic sovereignty. Yet, each crisis seems to have had the opposite effect, pushing the union toward a breakup as member states jealously guard their sovereignty.   What can be done? Many are waiting for the right leadership, but Europe has shown that it does not want charismatic strength in Brussels. Europe may end up once more as politically fractured as it has been for thousands of years. So far, neither war nor peace has transformed it from a geographic region into a true political union.   One can't escape the realization that the EU is on the verge of collapse unless it pulls together in a common and full-hearted effort to repair the deficiencies plaguing it from its conception. To master these crises, Europeans should first stop telling themselves these crises are the keystones making the European Union stronger. We should see them for what they are up to now: tombstones of the European project.

PHOTO GALLERY
Brussels On Lockdown After Terror Alert
Download
Calling all HuffPost superfans!
Sign up for membership to become a founding member and help shape HuffPost's next chapter
Join HuffPost 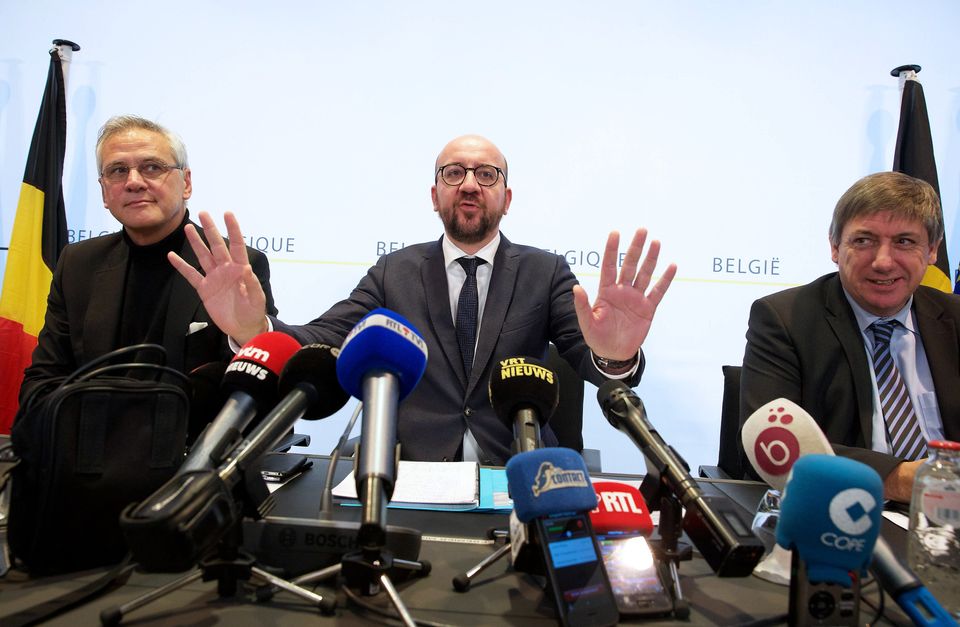