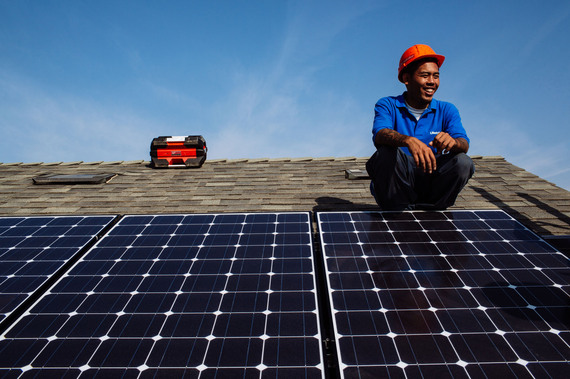 Leaders gathering in Paris to hash out an international agreement on fighting climate change should look to California for examples. My home state not only leads the way in attacking global warming, it's doing it by keeping the focus on people, communities and equity for all.

California's multi-pronged effort charges polluters for the climate- and lung-damaging garbage they put into our air, but that's just the start. It's what we do with the money raised that truly changes the game.

We know which communities get hit first and worst by air pollution and climate change: Communities of color and low-income neighborhoods. That didn't happen by accident. For generations, communities of color were redlined and used as toxic dumping grounds for facilities like oil refineries and freeways that wealthier neighborhoods didn't want in their back yards. It's only fair that those communities receive the benefits of the growing clean-energy economy, from good jobs to healthier air.

This isn't a dream, it's real. Funds raised by charging polluters under California's cap-and-trade program go into a Greenhouse Gas Reduction Fund that pays for projects to further clean the air and produce clean energy. California law requires that at least one quarter of those funds must go to projects that benefit the most polluted and economically struggling communities, as identified by a sophisticated tool created by the state Environmental Protection Agency. At least 10 percent must go to projects directly located within those communities.

Similar stories have begun to unfold all over California.

And up and down the state, people are being put to work making these projects happen - people like Denny Sysaknoi, who grew up in a rough neighborhood in Fresno and very nearly fell into a life of gangs, crime and violence. Now he's able to support his infant son with a new career as a solar installer.

California's decision to fight climate change head-on while keeping a focus on equity has helped fuel an economic boom. It's no coincidence that in the latest federal employment stats, California led the nation in job growth. Over 368,000 Californians now work in clean economy jobs, and the number keeps growing every year. My state is proving that we don't have to choose between protecting the planet and providing good jobs in thriving communities. If we lead with equity and ignore the false choices presented by the oil lobby, we can do both.

These smart, successful policies didn't happen by magic. They exist because communities of color got organized and demanded them. Those voices often got left out of decision-making in the past -- indeed, for too long the environmental movement has been plagued by a lack of racial, ethnic and gender diversity - but we're seeing progress.

California has set an example for the world to follow, but diverse voices must be at the table to make sure the progress being created here becomes real for people all over the globe.